Eagles Flyers Phillies Sixers About Us Write For Us
Flyers May Have Another Late-Round Draft Gem in Kase
Mariners Option J.P. Crawford, Aaron Nola's Brother to Minors

Looking Ahead at the 2019 Phillies Opening Day Roster 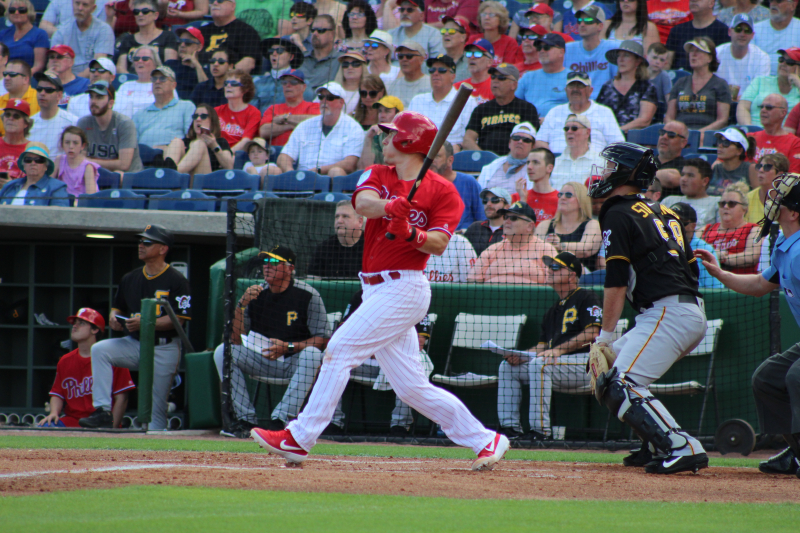 J.T. Realmuto will be the Phillies catcher in 2019 (Frank Klose/Sports Talk Philly)

The new season officially begins two weeks from tomorrow.  The Phillies have been hard at work in Clearwater, Florida, preparing for the new season.  The Phillies still have some time to put the roster together, and the club has seen some of their injured players make progress.

Matt Breen of the Philadelphia Inquirer reports that outfielder Odubel Herrera will hit today in a minor league game, and second baseman Cesar Hernandez will play in a game tomorrow, as the Phillies split up and play games in Bradenton against the Pittsburgh Pirates and Sarasota against the Baltimore Orioles.

Here is my best guess of the Phillies roster come March 28 as the season opens in Philadelphia:

The Phillies had extra inventory in the outfield.  But with the injury to Roman Quinn, all five outfielders fit for now.  The starters will likely be McCutchen in left, Herrera in center, and Harper in right.  Altherr and Williams will be the right-handed and left-handed bench bats, respectively.

The short Phillies bench means that Kingery will be the lone reserve in the infield. Kingery can back up third base, second base and shortstop, though he has yet to play first base.  Kingery or someone such as Williams might have to pick up a first base mitt at some point.

The only question here is who will back up the All-Star Realmuto.  Knapp has been impressive so far in Grapefruit League action. The switch-hitting Knapp can bat from the left side, unlike veteran candidates Drew Butera and Rob Brantly, in camp on minor league deals.  Knapp is already on the roster, which is helpful.

The Phillies will likely begin with those that started most games in 2018.  A left-handed starter would be a helpful addition, but is not considered likely.

The Phillies can send James Pazos to the minor leagues, which gives the club an opportunity to see Alvarez first.  The Phillies have plenty of right-handed veteran options.  Eickhoff, who probably will not make the starting rotation, could see some action as a reliever first, with an opening created by the injury to Tommy Hunter.

It is looking more and more like both Hunter and Quinn will not be ready by Opening Day.  This gives the Phillies some time to manage the log-jam that is in the bullpen and the outfield.