Eagles Flyers Phillies Sixers About Us Write For Us
Flyers-Hurricanes: Game 78 Preview
Flyers Officially Eliminated with Loss to Hurricanes

For the first time since 2011, the Philadelphia Phillies (1-0) will look to win their season-opening series, as RHP Nick Pivetta opposes the Atlanta Braves (0-1) and rookie RHP Bryse Wilson Saturday evening at Citizens Bank Park. The Braves, meanwhile, will look to avoid their first season-opening series loss to the Phillies since 1948, FOX Sports South's Cory McCartney notes. The Phillies have announced that, like Opening Day, the game is sold out.

Many fans have "high hopes" for Pivetta in 2019, and are using the #BreakoutPivetta hashtag to express such belief. The right-hander was acquired as a prospect from the Washington Nationals in July 2015, for closer Jonathan Papelbon nonetheless, and has worked his way up to become a top-three starter on the Phillies' pitching staff. He reached as high as 99 miles per hour on the radar gun this spring, ranked about the league's best in FIP, and has a strong strikeout-inducing breaking ball pitch in his pitching repertoire.

After “kicking butt” in the Opener Bryce Harper and the Phillies “can’t wait” for today vs Braves @6abc#bryceharper#RingTheBell pic.twitter.com/NmjTCK7qpP

As the saying goes, "if it is not broke, do not fix it." Manager Gabe Kapler is following that mantra in the second of the three-game set, as the Phillies will feature their exact lineup from their 10-4 Opening Day victory, one through eight. Left fielder Andrew McCutchen will lead off — after hitting a solo home run to get things going early against veteran RHP Julio Teheran. Rhys Hoskins — fresh off his first-career grand slam — will bat cleanup again behind Bryce Harper, who looks to collect his first hit in red pinstripes.

Saturday marks the Phillies' second of 21 games in their season-opening 28-game stretch that they face a National League East opponent. The Philles will take on the Washington Nationals on Tuesday in a brief two-game road set down in the nation's capital. They will later opposite the Miami Marlins and New York Mets for the first time in 2019 away April 12-14 and home on April 15-17, respectively.

Wilson has logged just three career appearances thus far. At age 20, he won his big-league debut as a starter, tossing five shutout innings away against the Pittsburgh Pirates on August 20. In September, Wilson appeared twice as a reliever, both home, opposite the Boston Red Sox and St. Louis Cardinals. He allowed multiple hits and runs in both outings.

MLB Pipeline ranks Wilson as the seventh-best Braves prospect, describing his "bulldog mentality," "fearlessness on the mound," and that he goes after hitters with his "three-pitch arsenal" with strong command:

His fastball typically sits in the low-90s, but he's shown the ability to ratchet it up to 97-98 mph at times, and he throws it with a lot of sink to get ground-ball outs. His breaking ball still gets slurvy at times and can look like a slider or a curve depending on when you see it, but it's an effective pitch, especially when it's harder and tighter. His changeup keeps improving and flashes above-average at times.

Pivetta will make his 30th career appearance at Citizens Bank Park, and ninth career appearance against the Braves. The right-hander is coming off a strong spring, in which he limited opposing batters to a .179 batting average, while posting a 0.92 WHIP and 14-5 strikeout-to-walk ratio spanning 16 1/3 innings. 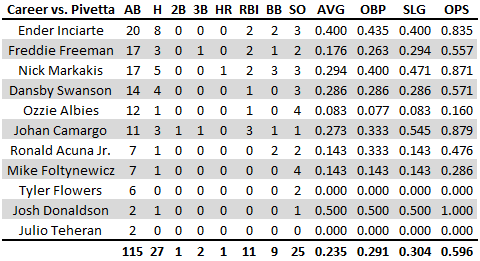