After going against rookie RHP Bryse Wilson on Saturday before a sellout crowd of 44,597 , the Phillies will face another Braves rookie in Sunday's series finale — RHP Kyle Wright. According to The Athletic's David O'Brien, this is the first time since 1905 that the Braves have tabbed multiple rookie starting pitchers within the first three games of a season.

ELIAS: Down the stretch in '18––from August 12 to the end of the season––the Phillies faced a rookie starter 7 times and they went 1–6 in those games. They are off to a good start in that department this year, after yesterday’s victory in which ATL started Bryse Wilson.

Atlanta's 8-6 loss to the Phillies on Saturday secured their first season-opening series loss to the Phillies since 1948, snapping their 10-series streak. The Phillies were down 3-0 early with RHP Nick Pivetta on the mound, when J.T. Realmuto picked up his first hit with the Phillies, a RBI single in the second. Two innings later, Cesar Hernandez hit a RBI triple, followed by Maikel Franco going yard for the second straight game. Realmuto hit a 434-foot blast to center in the fifth, his first in red pinstripes.

.@Phillies fans have to like what they see from the team's two biggest acquisitions of the offseason in @JTRealmuto and @bryceharper3 pic.twitter.com/y8l0W1duV7

Ranked by MLBPipeline.com as baseball's 30th-best prospect, Wright will make his first-career start after an impressive spring training showing in the eyes of Braves' brass. Although he posted a 7.02 ERA, allowing 13 runs (all earned) in 16 2/3 innings, he struck out 20 batters and walked just four.

The Huntsville, Alabama, native made four relief appearances last season with the Braves, all in September. In two appearances at home, Wright tossed a pair of scoreless innings each against the Boston Red Sox and Washington Nationals. In his two road outings, Wright surrendered a combined three runs on three hits, three walks, two home runs and three strikeouts against the Arizona Diamondbacks and New York Mets.

The only Phillie to have previously opposed Wright is Harper, who walked in his only plate appearance against the rookie right-hander.

Both the Phillies and Arrieta himself are optimistic of a bounce-back season in 2019, after he made an offseason adjustment to his arm slot, "a flaw that was exposed last season," notes The Athletic's Meghan Montemurro.

🔥Bryce Harper so fired up after his HR in large part because of "fired up" Phillies fans@6abc #bryceharper⁠ ⁠#RingTheBell⁠ ⁠ pic.twitter.com/zKaWOZmbYh 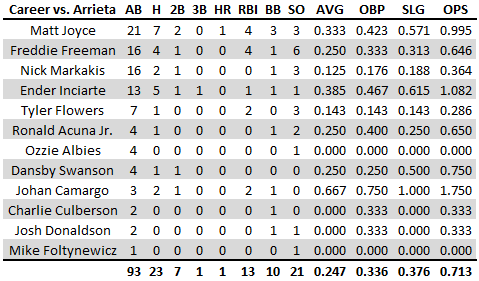