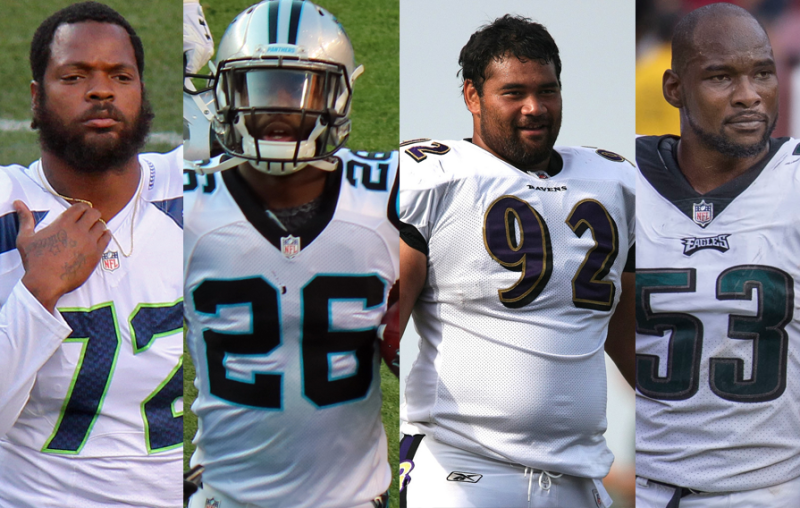 The Eagles entered the 2018 season looking to improve a roster that had just won the franchise it’s first Super Bowl. It was a tall order, but with GM Howie Roseman at the helm, there was not much worry among fans.

With the start of free agency less than a week away, let’s take a look back at the moves that the team made last offseason and how they worked out.

Howie made a big splash early in the offseason to get veteran Michael Bennett and a seventh-round pick for a fifth-round pick and receiver Marcus Johnson.

While he may have been able to help the Eagles following the loss of Mike Wallace early in the season, both Johnson and the pick were traded away by the Seahawks.

Meanwhile, the Eagles used the seventh-round pick to trade up and select fan-favorite tackle Jordan Mailata.

While it remains to be seen how Mailata will develop given more time, Bennett remains with the team (for now) following another strong season.

While he was initially unhappy with his playing time, Bennett saw the rewards of the rest as he posted 34 tackles, nine sacks, two forced fumbles and an astounding 30 quarterback hits. Instead of the locker room cancer Seattle made him out to be, Bennett thrived in the locker room and admitted he would like to stay in Philadelphia.

While the interior of the line was not as successful in 2018, it is hard to argue that Bennett was not an upgrade over the departed Vinny Curry, making a dominant defensive end room even better.

Acquired in exchange for veteran receiver Torrey Smith in what appeared to be more of a move to clear cap space, this trade aged horribly.

Not only did Worley not play a snap for the Eagles, but he managed to get himself arrested to make sure he was cut from the team. He eventually found his way onto the roster of the bottom-feeding Oakland Raiders and appeared in 10 games, making one interception, defending seven passes and making 33 tackles.

To make matters worse, the Eagles were without Alshon Jeffery at the start of the season and lost Mike Wallace to IR early in week two. They could really have used a veteran receiver like Smith for those first few weeks. Smith spent the season in Carolina as a back-up, making only 17 catches for 190 yards.

While Howie had no way of knowing that Worley would be stupid enough to get himself arrested just outside of the Eagles’ training facility or that they would lose Wallace so early in the season, the move clearly did nothing but clear cap space for the Birds. The extra cap space in a tight situation is the only thing that keeps this move from getting an F.

Arguably the most difficult player to grade, Worrilow was injured on the first day of practice through no fault of his own. Still, he landed on IR and was unable to return.

Worrilow re-signed with the Eagles almost immediately following the conclusion of the season, however, so he still has a chance to contribute on the field. His comments about why he wanted to return to the team and how they keep injured players involved indicates that he did remain involved in the building of a strong locker room and on the scouting team.

A player who was not even assured a spot and really owed nothing to the franchise chose to stick around and do what he could to help the team out. While he may not have improved what fans saw visibly, a presence and work ethic like that is good for any locker room.

The Eagles signed Nelson to a $1.6 million contract, so it was expected he’d contribute.

Not only did Nelson do poorly in training camp and fail to make the Eagles roster, but he managed to deprive it of another player by diving into the knee of the aforementioned Paul Worrilow on the first day of practices.

He provided nothing and caused two, albeit small, dead cap hits. There was nothing good that came out of this signing, which was highly lauded at the time.

Impacted by the prior two ratings, Reynolds saw far more action than anyone expected him to when the Eagles signed him.

Signed as a special teams ace, Reynolds became the only depth at the linebacker position alongside Nathan Gerry. With Kamu Grugier-Hill and Nigel Bradham each suffering broken thumbs and Jordan Hicks missing a few weeks, Reynolds did a nice job filling in as well as continuing his work on special teams.

He wasn’t amazing, but he certainly did well enough to more than warrant his minimal contract.

The Eagles re-signed free agent Nigel Bradham to the biggest deal they handed out last offseason. The move came as a bit of a shock, but Bradham was arguably the team’s most important free agent.

As it turns out, the Eagles would not get any linebackers in the draft and the neither of the two linebackers they signed with the expectation to contribute would find their way onto the 53-man roster.

Bradham played through a broken thumb and did not miss a game in the 2018 season, leading the team in tackles both during the regular season (97) and during the postseason (16) all while proving his ability to play the other linebacker position well.

In addition to being the best linebacker on the roster in 2018, Bradham figures to be the leader of the linebacker room in 2019 once again with Jordan Hicks seemingly departing.

Ngata was brought in to be an excellent depth piece behind Fletcher Cox and Tim Jernigan, but make no mistake about it, Ngata was on a downward spiral prior to his joining the Birds. The thought was that in a back-up role with limited snaps, he may be able to catch more of the form he had in his youth.

Of course, none of that worked out. Not only did Tim Jernigan essentially not exist the entire season and play fewer snaps that defensive lineman who were only with the team for two weeks, but Ngata also missed three games.

Ngata was a starter for more than half of the season and managed only 17 tackles and one sack while carrying a $3 million cap hit. For comparison, Treyvon Hester, who joined the team midseason and was slowly eased into snaps, managed 13 tackles and a sack for a $424,000 cap hit.

The Eagles could have probably used Bruce Hector, T.Y. McGill or Hester more and gotten the same production.

Mike Wallace was brought in to be the deep threat that replaced Torrey Smith and also figured to be a good addition to the locker room as he had already mentored Nelson Agholor from afar when Nelson struggled early in his career.

While he may have been an excellent locker room guy, he contributed next to nothing on the field. He failed to register a catch in week one and when he made his first catch as an Eagle, the play was called back by a penalty on the offensive line and Wallace suffered a fractured tibia.

While he was eventually pulled off of IR and finished the season on the 53-man roster, he never appeared in another game for the Birds. While there is a chance he returns, the fact that he was not already re-signed seems to indicate that he may be interested in testing the market and the team will certainly not get in a bidding war for his services.