Fletcher Gets Critical on Flyers Mindset 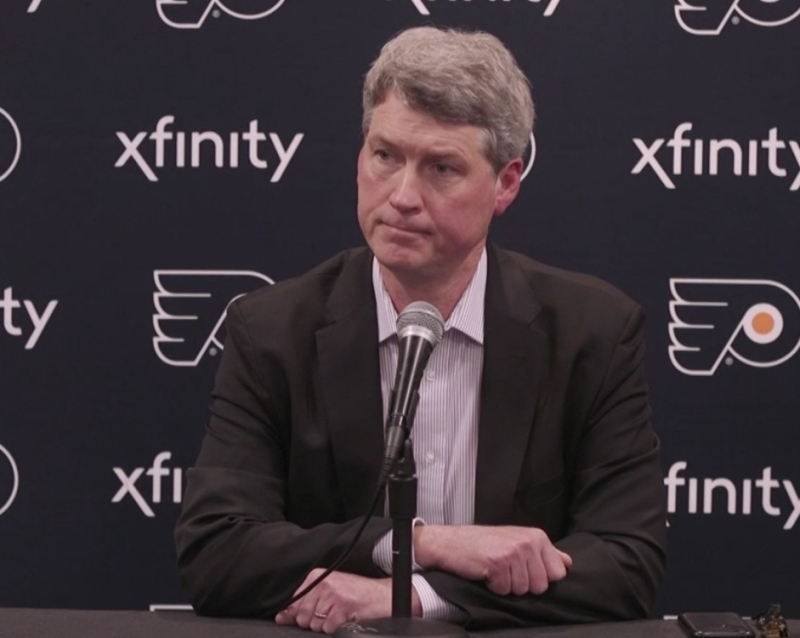 One day after the players offered their thoughts on another lost season for the Flyers, GM Chuck Fletcher offered his thoughts.

Say this about Fletcher: he knows this team has fundamental problems that go far beyond just adding players and changing coaches. There’s a reason the Flyers allowed the first goal in 50 games this season and trailed 2-0 in 32 of 82 games. It’s a mindset issue.

“I’m not trying to overplay this, but it’s habits,” Fletcher said. “It’s building habits in practice because you revert to what you know in stressful situations. It’s more the mindset, it’s habits. We make the game difficult at times.”

It was an honest assessment from the GM who watched a team go from a second-half run that closed a 16-point deficit to the playoffs to three points before losing 10 of the final 13 games, all in regulation.

How do you solve fundamental problems?

“It starts with me, then it goes to the coaches, then to the leaders and the players,” Fletcher said. “It’s not just mindset, it’s actual details. It’s doing things the right way repeatedly. That’s how you gain confidence and that’s how you learn to play the right way.

“It’s not just systems. It's puck management, game management, being in the right spot, holding onto the puck offensively, making more plays offensively, retrieving pucks and winning battles. There’s a whole host of things that go into it. We have some bad habits right now, flying into the zone before we have possession of the puck, not getting in shooting lanes, not keeping the third guy high, turning pucks over in the neutral zone when there’s no time and space to make a play, and just recognizing things.

“It’s mindset, but you need the mindset to embrace the habits.”

That’s what should be the most alarming thing to come out of this season. Fletcher identified many ways this team could be improved over the offseason. They need a goalie to play behind Carter Hart. They could use a quality veteran forward. They could use a veteran defenseman. Adding some help scoring up front could be a difference maker. But that’s an awful long list for a team that always seemed to be on the cusp of competing.

Fletcher didn’t throw anyone under the bus in his end-of-season presser, but it sure seems like the new perspective is paying off.

It was a day when many fans were lamenting the loss of a coaching option they desired for four months that, in reality, was never in play for the Flyers. Fletcher said there was no contact with Joel Quenneville and Coach Q’s quick decision to go to Florida said it all. There was no one else in consideration by the future Hall-of-Fame coach.

That’s not the Flyers fault that Coach Q had eyes for someone else. And it shouldn’t be the end all, be all of the offseason.

What Fletcher’s honest assessment showed is what the eye test showed down the stretch. Against the elite teams, in the biggest game, this team continues to make mistakes that make them easy to play against. That’s not a coaching problem or a management problem. That’s a roster problem.

There was no coach — not Scott Gordon, not Dave Hakstol, not Joel Quenneville or even Fred Shero’s ghost — that was going to change that.

Fletcher will make a decision on who the head coach of this team will be going forward, and he will have to act fast. It may be Gordon. It may be someone else. But that decision will not make or break the offseason.

The roster needs work. The players need to come into the season with a new mindset and approach to the game, one that focuses on the finer details.