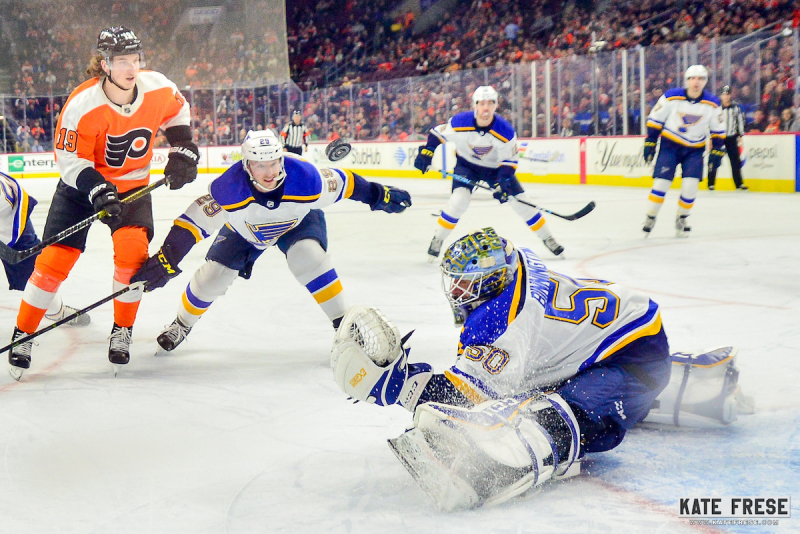 There are just two games left on the Flyers schedule, including one final game away from home which the Flyers will play on Thursday.

Just like on Tuesday, there is a lot at stake for the opponent. Dallas had a chance to clinch a playoff spot in Tuesday's game and did convincingly. The St. Louis Blues lost in a shootout on Wednesday night to Chicago, moving them to within a point of the Central Division lead with two games to play for all three teams locked in the battle for the title. Nashville and Winnipeg both sit one point ahead and both will be in action on Thursday night as well, leaving a lot of room for shuffling in the standings with this game.

Jake Voracek has just three points in the last nine games since a six-game points streak where he picked up 12 points.
It hasn't been the best season for former Flyer Brayden Schenn, who has just 15 goals, his lowest total since scoring 18 with the Flyers in 2014-15. Schenn does have a goal against his former team already this season in St. Louis' 3-0 win over the Flyers in January.

Brian Elliott makes what could be his final start as a Flyer against his former team in St. Louis. Elliott has started just two games since March 11, allowing seven goals to Toronto on March 15 and three goals to Washington on March 24, both losses.

The Blues rookie sensation in goal has been Jordan Binnington. Binnington's storybook season starts against the Flyers on Jan. 7, when he made his first NHL start and made 25 saves in a shutout win. He has made 27 starts since, winning 21 of them, including posting four more shutouts. He has won six of his last seven starts, allowing three goals or less in all seven starts.

Corban Knight cleared waivers and is expected to be sent to the Phantoms after the road trip is completed. He will not play in Thursday's game. The Flyers will dress seven defensemen with Justin Bailey also coming out of the lineup. Knight did skate in place of Nolan Patrick during the morning skate and there has been no update yet as to why Patrick was not on the ice. It's assumed it was maintenance for now, but there is always a chance there is a different reason he did not skate.