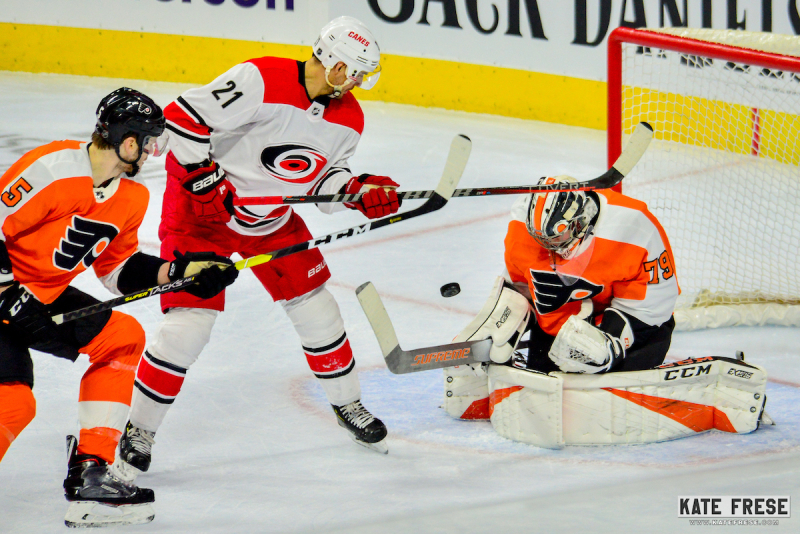 It wasn't for a lack of effort, but the Flyers couldn't change the results that have followed them around at the end of the season.

For the fifth straight game and 10th time in the last 13 of the season, the Flyers suffered a loss, 4-3 to the Carolina Hurricanes, a fitting end to a disappointing season.

The Hurricanes jumped out to the lead midway through the first period as Warren Foegele beat Carter Hart from the slot on a broken play. Just over two minutes later, Carolina struck again as Justin Faulk jumped up into the play and lifted a quick shot over Hart to make it 2-0.

The Flyers got on the board at 14:19 of the opening period as Travis Sanheim set up Oskar Lindblom in front and he lifted a backhander over Curtis McElhinney to cut the lead to one.

Just 81 seconds later, Carolina restored the two-goal lead with a goal by Teuvo Teravainen, his 21st of the season.

After 20 minutes, Carolina was outshooting the Flyers, 11-5.

The Flyers came out energized to start the second period and quickly turned it into a pair of goals to tie the game. Travis Konecny cut through the slot and scored at 1:27 to cut the lead back to one. Less than five minutes later on the power play, Sean Couturier deflected a shot by Jake Voracek in to tie the game at three. It was Couturier's 33rd goal of the season and 76th point of the season, matching his career high for points from a season ago.

Through 40 minutes, the Hurricanes were outshooting the Flyers, 27-21.

In the third, the Flyers outshot Carolina, 10-1, in an effort to get the game tied. McElhinney did his part, stopping all 10 shots in the period as time ran out on the Flyers again.

In the end, it was a 4-3 defeat for the Flyers that brought their final record to 37-37-8 on the season. The loss also locked up the 22nd spot in the league standings, meaning the Flyers will have the 10th-best odds in the NHL Draft Lottery being held on Tuesday.

Giroux was the only Flyer to post a multi-point game with a pair of assists, finishing the season with 85 points. Staal and Teravainen each had a goal and an assist on the night. Brock McGinn had two assists.

Hart finished the game with 24 saves on 28 shots. McElhinney made 28 saves on 31 shots in the win, which locked up the first wildcard for Carolina and a matchup against the defending Stanley Cup champion Washington Capitals in the first round of the playoffs.