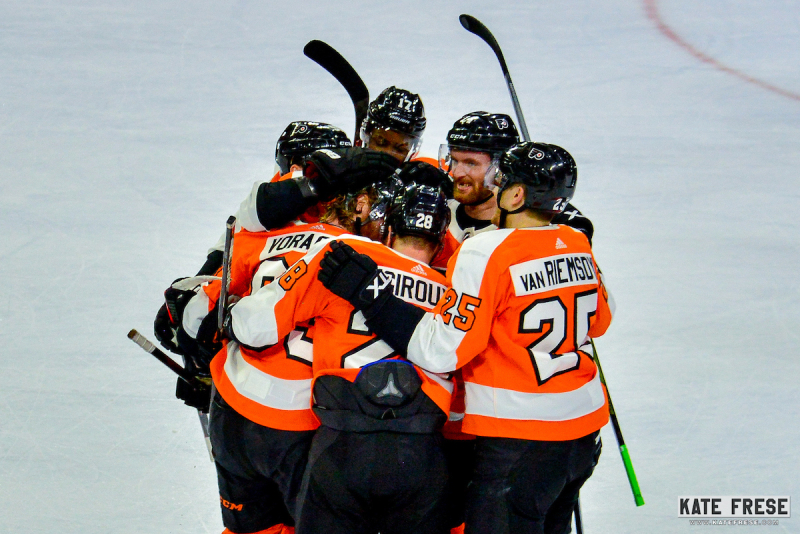 On Saturday night, it all finally comes to an end. Game 82 for the Flyers will be played at Wells Fargo Center against the Carolina Hurricanes, putting a wrap on a season that may be one of the wildest in franchise history.

The season will ultimately be known for the failure to meet expectations, to take that next step in the development of a contender, and the massive fallout behind it.

The Flyers opened the season on a high note with a 5-2 win over the defending Western Conference Champions in the Vegas Golden Knights. But from there, they went back and forth with the results, a win then a loss, then a win, then a loss. They suffered an embarrassing 8-2 defeat to San Jose in the home opener and carried a 5-7-0 record after a 6-1 loss to the Islanders. They closed October with a 3-2 win in Anaheim on a late goal by Nolan Patrick.

The late goal by Patrick helped spark a four-game road trip that may have temporarily saved the major changes ahead. The Flyers opened November with a 5-2 win in LA, battled to a 4-3 overtime loss in San Jose and defeated Arizona, 5-2, to return home for a five-game homestand with a 8-7-1 record. They pulled off a dramatic comeback over Arizona in overtime to keep the winning ways going and added a convincing 4-0 win over Chicago to move to 10-7-1 with the help of wins in five of the last six games and points in all six.

Over the next six games, the Flyers would earn three points in the standings, falling in four straight games and five of six. Each one got progressively worse. The Flyers managed to earn a point against juggernaut Tampa Bay with an insane third-period comeback only to lose in overtime, 6-5. They came out unprepared against Buffalo in a 5-2 loss. Following a 4-0 win over the Rangers on Black Friday, they again looked unprepared in a 6-0 drubbing to Toronto.

That set the stage for the first major change of the season. The following Monday, Nov. 26, GM Ron Hextall was fired by the team. The Flyers closed out November on the ice with a 4-3 loss to Ottawa the next day, blowing a 3-1 lead in the final 10 minutes of the game.

The Flyers had a light schedule to start December, but did earn a statement victory over Pittsburgh on the road at a time when the franchise was certainly vulnerable. On Dec. 3, one week after the firing of Ron Hextall, Chuck Fletcher was named the new GM of the Flyers.

Following a 4-3 overtime loss to Columbus on Dec. 6, the Flyers embarked on a five-game road trip that would ultimately lead to another franchise-altering move. The Flyers defeated Buffalo, 6-2, on Dec. 8, but were routed in Winnipeg the next day, 7-1. The Flyers carried a 5-3 lead into the final two minutes of the third period in Calgary on Dec. 12, only to allow two goals in the final 1:08 and the overtime winner 35 seconds into the extra session in a 6-5 loss. Two uninspired games against Edmonton and Vancouver sealed the fate. Another change was in store.

On Dec. 17, Dave Hakstol was fired as head coach and Scott Gordon was named interim head coach. Carter Hart was also called up to the NHL and made his debut the next night in a 3-2 win over Detroit. The Flyers went 3-1-0 in the first four games under Gordon.

Out of the holiday break, the Flyers lost the final three games of December, another wild 6-5 overtime loss to Tampa, a 2-1 loss to Florida and a 3-1 loss to Carolina.

The Flyers started the new year the way they ended the previous one. They lost to Nashville on New Year’s Day, 4-0, and following that up with four more losses to extend a losing streak to eight games.

Things shifted from there with Hart leading the way. The Flyers snapped the losing streak with a 2-1 win over Dallas, suffered a 3-2 loss in New Jersey on Jan. 12 and from there, didn’t lose a game until Feb. 7, including overtime wins over Boston and Edmonton and a dramatic 2-1 win against Vancouver to stretch the streak to eight games.

The winning streak ended with a 3-2 shootout loss to LA on Feb. 7, but the Flyers kept going with wins in four of their next five games.

By the middle of February, the Flyers were started to re-enter the playoff picture. Two losses to Tampa and Montreal in the week leading up to the Stadium Series shifted everything and put the Flyers on the ropes with the trade deadline looming.

Then came the Stadium Series on Feb. 23 and for 55 minutes, the Flyers were held at bay as the Penguins pulled ahead to a 3-1 lead. A dramatic comeback in the final four minutes of the game tied things up and Claude Giroux finished his 800th NHL game with the overtime game-winner.

That seemed to spark the Flyers again, as they won their next game against Buffalo and took Columbus to overtime again in a loss to end the month.

The heroics in the Stadium Series in front of 70,000 fans at Lincoln Financial Field was bittersweet two days later when the Flyers traded Wayne Simmonds at the deadline to Nashville for Ryan Hartman.

March opened with a similar string of success for the Flyers. They won four of their first five games in the month and after a 3-2 win over Ottawa on March 11, were just three points out of a playoff spot with 13 games to play.

It all fell apart in that time. Back-to-back losses to Washington and Toronto, a game which the Flyers led 5-2, seemed to be the dagger, but an overtime win in Pittsburgh on March 17 kept the Flyers alive going into a crucial game against Montreal two days later.

The Flyers were outmatched by Montreal in a 3-1 loss, but followed that up with a 3-1 win over Chicago to keep their hopes alive a little longer. Back-to-back losses to the Islanders and Capitals that weekend seemed to be the final nail in the coffin, as the Flyers had just six games left to make up a six point deficit. The Flyers did get a 5-4 shootout win over Toronto in March 27, but saw their playoff hopes officially end with a 5-2 loss to Carolina on March 30. The next day, the Flyers lost to the Rangers, 3-0.

Two of the three games on the schedule in April have been completed an both have resembled results from October. A 6-2 loss in Dallas and a 7-3 loss in St. Louis have sent the Flyers out with a whimper.

With Saturday’s game, so will end a disappointing and crazy season, one that features major chances to the personnel, dismal stretches that had fans thinking about top draft picks, a run in the second half that had the Flyers on the cusp of a playoff spot and ultimately the end of the line where the Flyers ran out of gas from chasing for too long.

It is a season where there were certainly some forgettable moments on the ice, but it is a season that won’t soon be forgotten for all of the off-ice events.