After 2 Trying Seasons, Patrick Needs to Prove Himself in 2019-20 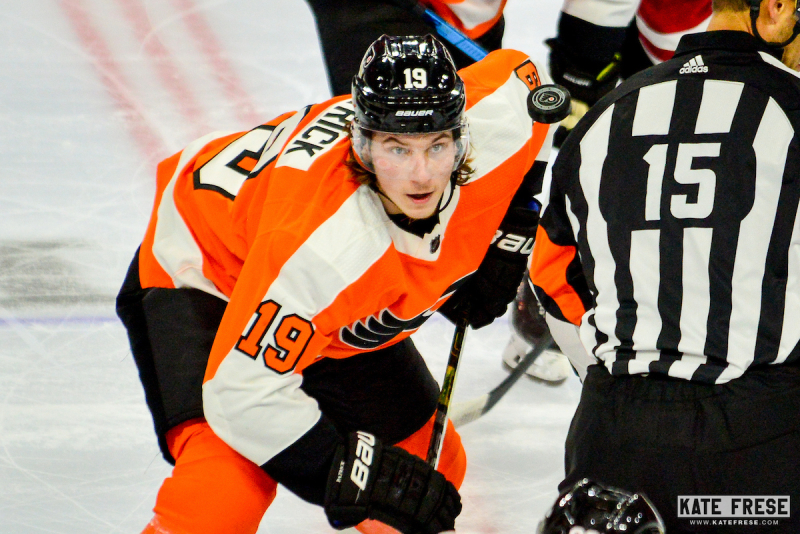 The moment that the Philadelphia Flyers discovered that they were going to pick second overall in the 2017 NHL Draft, they knew that they would get an exceptional player in either Nolan Patrick or Nico Hischier. The New Jersey Devils, who had the first overall pick, decided to go with Hischier, giving the Flyers the option to pick the star center playing for the Brandon Wheat Kings with the second overall selection.

Patrick made the team right out of rookie camp, but unfortunately had a rough start to his rookie season. Just three games into his NHL career, Patrick was hit up high and hard against the boards by then Anaheim Ducks forward Chris Wagner. Right away, Patrick looked shaken up, as he was slow to gather himself on the ice. Slowly but surely, Patrick started to get accustomed to the NHL and although his points didn’t show how lethal he can be, the 18-year-old rookie put up 30 points in 73 games.

Patrick bounced all over the place from the second line to even the fourth line.

In 2018-19, injuries prevented him from playing the full 82 game schedule yet again, but throughout the season following his return, Patrick was showing tremendous promise. In early November, the Winnipeg native gathered six points in a four-game streak.

Just like last season, Patrick jumped from line to line. His main line was centering Jake Voracek and the rising Oskar Lindblom. Together, that line showed it’s true potential and a possible sneak preview of what the 2019-2020 third line could look like. It has everything a team should need; speed, scoring, and depth, all keys to a successful team.

Something that may help Patrick develop into a pivotal center for the Flyers depends on what GM Chuck Fletcher does during the offseason. One of the most important pieces to bring in is a second-line center via free agency or trade, depending on the price. The reason for this is because Patrick is still a very young center that needs to develop the right way. There is plenty of pressure on him at just 20 years old, however with the right mentality and right pieces, Patrick could certainly become something special.

Some of the better potential UFA’s that Philadelphia could sign would be perfect for the second line. Matt Duchene could really help the Flyers in multiple areas, including scoring. In 70 games played combined with the Ottawa Senators and the Columbus Blue Jackets, he scored 31 goals and 39 assists for 70 points, which tied his career high in points back in 2013-14. His face-off skills are just as impressive as his percentage was 55.9 percent in the circle.

Joe Pavelski is a potential UFA and with his team now eliminated from the playoffs, there are a numerous amount of questions that San Jose Sharks GM Doug Wilson has to answer. The biggest question is will they re-sign Pavelski?

Yes, he is 35 years old, however, he is still performing at an exceptional rate. He scored 64 points, including 38 goals, in 75 games this year. He’s been a consistent 60-plus point scorer for the last seven years, excluding the 2012-13 shortened season.

Another important factor in the veteran’s game are his face-offs, which this year was 53.2%. The powerplay productivity he proves as well could help the Orange and Black tremendously as he scored 21 points on the man advantage scoring 12 goals with 9 helpers.

On the wing, some of the better UFA’s available that could fit on the third line, which could most likely be centered by Patrick, include Gustav Nyquist, Jeff Skinner and Carl Hagelin. Not all of these players will be available come July 1, but it is certainly an encouraging list of possibilities for Fletcher to browse and consider.

Patrick is certainly due to have a breakout year, and in 2019-20, he has a lot to prove. Philadelphia is desperate for strong centers, and over time and with the right development path, Patrick will prove why he went second overall two years ago in the NHL Draft.