Understanding the Phillies Origins and Nickname Joe Mulvey, unknown, Jack Coleman, Charlie Ferguson, Sid Farrar, Ed Andrews, Bill McClellan, Jack Manning and Blondie Purcell pose for a picture at Recreation Park on May 16, 1884. (Source: NYPL Spalding Collection)
By Matt Albertson, Historical Columnist
Two weeks ago I was privileged to spend a weekend in Cooperstown, New York at the SABR 19th Century Committee's annual Frederick-Ivor Campbell Conference. Something that came up a few times was how club's deal with and promote their origins. For example, the Cincinnati Reds currently promote that they were established in 1869, suggesting a direct tie to the infamous, undefeated Cincinnati Red Stockings. Well, it's not true. The current organization was founded in 1882. Another discussion during an intermission questioned what current MLB team is the oldest; it's either the Cubs or the Braves but the details are murky. I brought up the Phillies who promote that they are the oldest one city, one name franchise in American professional sports. It is true but there are a few things I felt Phillies fans should know about the club's origins.
The Phillies celebrated the 136th anniversary of their first game on May 1. Indeed, you can find a lot of Phillies shirts and trinkets with the "est. 1883" on it somewhere. The club even celebrated it's 100th anniversary in 1983 with a special patch on their uniform. The club's true origin, however, is a bit more complex. 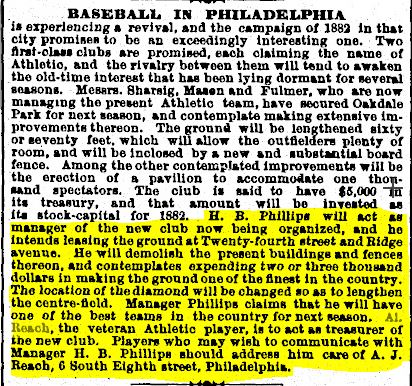 The Athletics fired manager Horace B. Phillips in 1881 and he eventually joined forces with sporting goods magnate Al Reach to obtain a major league franchise in the upstart American Association. In 1876, the Athletics refused to go on a western road trip at the end of the season and were subsequently booted from the National League, starting a drought of major league baseball in the Quaker City. The American Association was set to begin its first season in 1882 and wanted teams in big markets, with Philadelphia being a key city. To oversimplify the situation, Phillips and Reach's problem was they did not have players nor a major league-ready stadium and the Association instead chose Sharsig's Athletics, which had both players and a ballpark. So Phillips and Reach did the next best thing and joined the League Alliance.

The League Alliance is a confusing entity so I won't dive into the details here, but for Phillips and Reach's club, it meant that their players were protected from confiscation by other National League clubs and they would play National League teams throughout the year, as exhibitions. National League teams would attract a crowd and playing all National League teams in Philadelphia only was a benefit because the team did not have to go on lengthy road trips to cities like Chicago and Detroit. The League Alliance club was required to pay between $50 to $150 to the League club. Despite this, the club reported a $16,000 profit at the end of the season. The only reason for joining the Alliance as opposed to the League is  because the League had an unwritten cap on the number of clubs, making the Alliance a perfect place for clubs with players almost or of major league talent who did not want their players poached by the League.
Moving along.

Reach's club, officially known as the Philadelphia Ball Club and Sporting Association  gains admission to the League Alliance on December 7, 1881 at the National League's annual winter meeting. The club existed on paper only. They did not have a home field yet and were in the process of filling out a roster. And how better to fill out a roster of near-major league talent in the 1880's? Advertise in the newspaper, of course. The address listed was for Reach's sporting goods emporium. 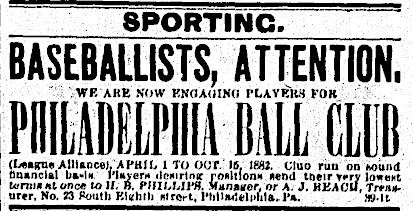 While Reach completed the roster, he also secured a lease for the Horse Market at 24th and Ridge Avenue; the grounds once used as the home field for the National Association's Philadelphia Centennial's in 1875 . The Times announced in January that "every vestige of…the horse "Horse Market" will be removed and new suitable fences, buildings, open seats and large, covered pavilion will be erected in the spring. The pavilion will have a number of reserved chairs for season ticket holders and ladies." Not for nothing, but those plans sound awfully spartan. They were clarified in early March, but still sounded basic. Construction was to be completed April 1 with the first game on April 8. Oh, the ball park also included a bath tub and "shower-bath" in the players' clubhouse. Not bad! The grandstand was situated at the corner of 24th and Columbia Ave (in the picture below, the bottom right). 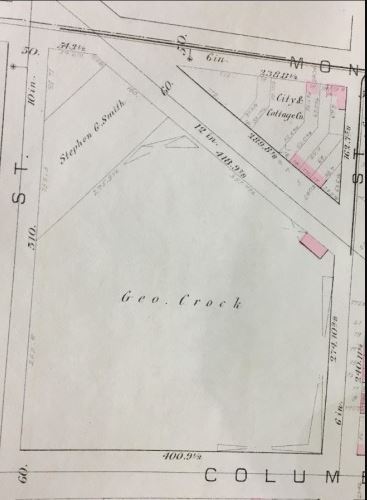 The site of Recreation Park from 1882 G. M. Hopkins city atlas, plate H. Courtesy Ed Morton (Source: Free Library of Philadelphia)
The 1882 season did not bode well for the Phillies. In 65 games played against National League opponents, they were 16-44-5. Against the only other League Alliance club, the New York Metropolitans, they were 12-20-1 in 33 games. However, against "outside clubs", the Phils went 44-2-0 in 46 games. The level of competition that separated the major leagues from the amateur level was astounding even in 1882. The Phils and Mets were certainly the best two professional clubs in the country who were not then in a major league. At the 1882 winter meetings, the Phillies were admitted into the National League after the League pushed the Worcester and Troy clubs out.
It's a common misconception that the Worcester Brown Stockings moved to Philadelphia and became the Phillies. As has been explained above, the Phillies played a full season in the League Alliance while Worcester floundered to an 18-66 record and finished last in the National League. Troy and Worcester were the two smallest market teams in the National League and the League wanted to replace them with two larger markets in 1883, especially considering the American Association's successful first year. Reach reorganized the club on November 1, 1882 and changed the club's name from the "Philadelphia Ball Club and Exhibition Company" to the "Philadelphia Ball Club Limited". The club was formally admitted to the National League a month later on December 7, 1882. 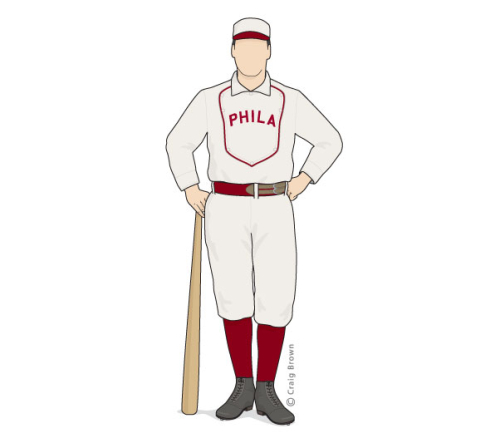 Rendering of the 1883 Phillies uniform. Courtesy of threadsofourgame.com
The club's reoganizaton was actually a formal chartering which is why the Phillies recognize 1883 as their founding year. The club was chartered as a limited partnership due to Pennsylvania's prohibition of incorporation of sporting clubs for profit. Al Reach, who was the sole proprietor of the club after Phillips' departure in January 1882, was named chairman and held only 20 of the 150 issued shares. John I Rogers was named secretary and treasurer while Thomas J. Pratt and Stephen Farrelly were shareholders, Farrelly being the majority shareholder with 100 of 150 shares owned. The original charter's current location is unknown, if it even exists any longer. But fortunately the Inquirer published the full charter in its pages on March 29, 1901. I've included this 1901 reprint at the end of the article.
And what of the team's nickname? There's a misconception that the team's nickname was the Quakers in 1883 and baseball-reference identifies the club's nickname as such from 1883-1889. First, nicknames were not official monikers used by major league teams until the 20th century. In the 19th century, nicknames were created and used by newspapers. In 1883 alone, the Philadelphia Baseball Club Limited was identified as "Philadelphias", "Phillies", "Quakers", and even "Athletics". The nickname "Phillies" itself is simply a shortened version "Philadelphias". Shortened nicknames, when possible, were used by newspapers because they took up less space in a column. Plus, "Phillies" rolls off the tongue easier than "Philadelphias". Like "Athletics", the "Phillies" moniker was recycled from an earlier club. In this case, the first usage in newspapers was in reference to the 1873 Philadelphia White Stockings and the nickname was used on occasion to identify at least three different teams between 1873 and 1877.
In conclusion, the present day Phillies club was formed in 1881 and first took the field in 1882. Al Reach reorganized the club and the Philadelphia Ball Club Limited was chartered in November 1882 and admitted to the National League in December 1882 for the 1883 season, which is why the organization to this day cites 1883 as their founding.
Reprinted text of the 1882 charter from the March 29, 1901 Inquirer: