Eagles Flyers Phillies Sixers About Us Write For Us
Previous month:
April 2019
Next month:
June 2019 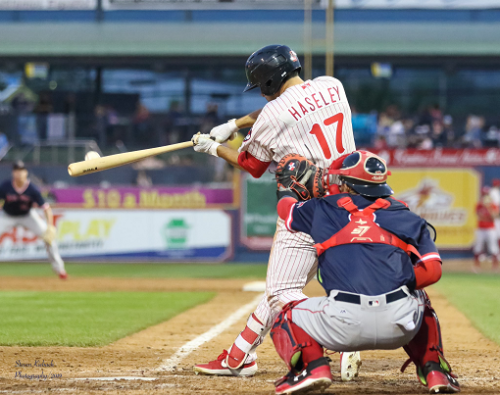 Less than two years since he was drafted eighth overall in the 2017 MLB June Amateur Draft, Philadelphia Phillies No. 3-ranked prospect OF Adam Haseley did not disappoint in his Triple-A debut Wednesday evening at McCoy Stadium in Pawtucket, Rhode Island.

Spanning four plate appearances, the 23-year-old scored one run and collected three hits — including two RBI doubles — as the Lehigh Valley IronPigs topped the Pawtucket Red Sox, 3-1. Haseley's first RBI double in the top of the first put the club on top 1-0, and it never looked back.

Haseley laced another just an inning later to give the IronPigs the 3-0 advantage; he also singled in the fourth, and struck out looking in the sixth in the seven-inning game.

The first-place Philadelphia Phillies own the second-best record in the National League; yet, they appear to be anything but satisfied and willing to remain "status quo" when it comes to assembling the best possible 25-man roster.

On Wednesday, baseball scribe Jayson Stark joined 97.5 The Fanatic, and shed light that the club is ready to be "really aggressive on the trading market, and soon," with one of their targets being four-time All-Star, three-time World Series champion and two-time Silver Slugger Award winner, LHP Madison Bumgarner.

While the Phillies had planned to mostly target pitching "of all shapes and sizes," Odubel Herrera's alleged incident earlier this week resulting his placement on administrative leave with possible suspension "could change that," according to Stark.

Yet, the club's lengthy injuries, particularly to their bullpen, leaves them with no choice but to address their pitching depth.

Amid the future of center fielder Odubel Herrera being in question — at least in a Philadelphia Phillies uniform — the club on Wednesday promoted its No. 3-ranked prospect, OF Adam Haseley, to Triple-A Lehigh Valley, according to The Morning Call's Tom Housenick.

Congrats to Adam Haseley on his promotion to the @IronPigs - the former 1st round pick batted .268/.356/.471 with 7 HR in 41 games for Reading this season. pic.twitter.com/eJnrkiNXtL

Haseley helped The First Academy in Florida win the National High School Invitational back in 2014, then went on to be one of the top two-way players in college, starring in the outfield and on the mound for the University of Virginia for three years. His bat took a big step forward in his junior year, catapulting him into the top 10 of the 2017 Draft to No. 8 overall, where he signed with the Phillies for an above-pick value $5.1 million. He reached Double-A in his first full season of pro ball.

A contact-first hitter for most of his college career, Haseley's stock soared when his power from the left side started to show up as a junior. He has the innate ability to barrel up the baseball and send it to all fields. He doesn't strike out a ton and can draw walks and there's the chance for more power to come as he learns to add more leverage to his swing, something he did more of later in his first season. An above-average runner, the Phillies feel he can stay in center long term and be better than average there, though he saw time at all three outfield spots in 2018.

The Phillies feel Haseley's first year was a bit under-appreciated and are excited to see how he can build off of his successful opening season. If he does have to move to left field full-time, there's more pressure on the bat, but there's confidence he could be a solid regular in center at the big league level.

Haseley was drafted eighth overall in the 2017 amateur draft out of the University of Virginia. The Orlando, Florida, native has yet to commit an error in the field this season, logging 206 2/3 innings in right field (49 chances), nine innings in left field (one chance), and 144 innings in center field (35 chances).

Since the last time the Philadelphia Phillies qualified for the postseason, 2011, the club has had just two Major League Baseball All-Star Game starters — Chase Utley (2014) and the late Roy Halladay (2011).

The last time the Phillies have had multiple starters in the Midsummer Classic — Utley (second base), Raul Ibanez (left field) and Shane Victorino (center field) in 2009.

That, of course, cannot happen without the support of fans. On Tuesday at 2 p.m., Major League Baseball opened its revamped balloting format, including two phases of fan voting to determine the All-Star starters —"The Primary" and "The Starters Election."

Voting is now open for the 2019 @AllStarGame at https://t.co/LNtBBqLAax! pic.twitter.com/wSVtKknT5A

The recently recalled Nick Pivetta (W, 3-1, 7.71 ERA) would outduel 14-year veteran Adam Wainwright (L, 4-5, 4.94 ERA), as the Phillies edged the Cardinals, 4-3 — behind two-RBI extra-base hits via Bryce Harper (double) and Cesar Hernandez (home run). Hector Neris notched his 10th save in as many opportunities with a 1-2-3 ninth on two strikeouts.

With the win — the Phillies' seventh one-run victory — the club returned to its season-high 10 games over .500. After collecting just one hit on Sunday, the Phillies outhit the Cardinals, 8-4, going 2-for-4 with runners in scoring position. The Phillies have now won eight of their last 11 games.

The alleged event occurred at Atlantic City's Golden Nugget Hotel and Casino, according to a police report, which said Herrera's girlfriend had "visible signs of injury to her arms and neck that was sustained after being assaulted," by Herrera, "during a dispute." Herrera has since been released from custody; yet, he faces "swift discipline under Major League Baseball's domestic abuse policy," NBC Sports Philadelphia notes, adding "if/when he is suspended, he would be placed on the restricted list."

On May 27, 2019, at 8:33 pm, patrol officers responded to the Golden Nugget Hotel and Casino, located at 600 Huron Avenue, for a report of a domestic violence incident.  Officers arrived to find the victim, a 20 year old woman from Philadelphia, PA, speaking with security officers.  The victim had visible signs of injury to her arms and neck that was sustained after being assaulted by her boyfriend, David Odubel Herrera, during a dispute.  The victim refused any medical attention.

Officers located Herrera in his hotel room.  He was arrested without incident.

Herrera was released on a summons with a future court date.

The Phillies issued the following statement:

"This morning we were made aware of an alleged incident involving Odubel Herrera. Upon receiving this information, we immediately reported the incident to Major League Baseball, which has informed us that Herrera has been placed on Administrative Leave. The Phillies take any domestic violence accusation seriously, and strongly support the Joint Domestic Violence Policy agreed upon by MLB and the MLBPA."

Around the NHL: Blues Start Fast, But Bruins Respond to Take Game 1

The Boston Bruins had a 10-day break between games and tried to ease the blow of the layoff with a intra-squad scrimmage last Thursday. For the first 21 minutes, it didn't work.

The Bruins weren't badly outplayed, but trailed on the scoreboard, 2-0, to the St. Louis Blues. Just 1:16 later, Connor Clifton gave TD Garden a reason to cheer and the Bruins were back in the game. They never looked back from there.

Boston scored four unanswered goals to erase a hot start by the Blues in a 4-2 win in Game 1 of the Stanley Cup Final on Monday night.

Around the NHL: Previewing a Bruins-Blues Stanley Cup Final

The 2019 Stanley Cup Final is set to begin on Monday night and this very much feels like David vs. Goliath. Boston has had an over-abundance of championship success, including a World Series and Super Bowl in the last eight months and now the Boston Bruins get their chance to turn the duo into a trio. The St. Louis Blues are making their first Stanley Cup Final appearance in 49 years in search of their first title.

It's a rematch of the 1970 Stanley Cup Final, you know, the one with the immortalized Bobby Orr goal.

Here is a preview of the series, including each team’s candidates for Conn Smythe, how they got to the Final and what they need to do to win the Cup.

A team of relative unknowns in Finland managed to pull off the sweep. Finland got a late goal from Kaapo Kakko to claim gold over Team USA at World Juniors in January. Now four months later, Finland is on top of the hockey world again after a 3-1 win over Canada in the Gold Medal Game.