Eagles Flyers Phillies Sixers About Us Write For Us
Soul Vie for Revenge, 2nd Win in Road Battle Against Baltimore
Phillies Defeat Nationals Behind Hoskins' Home Run, Neris' Save 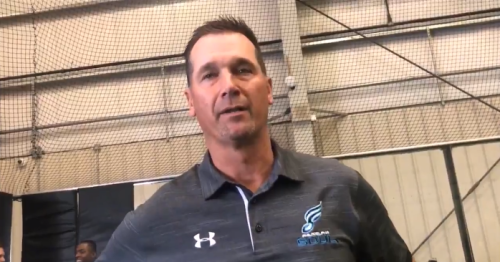 In a game that featured just 12 combined points over the first quarter of action, the Philadelphia Soul (2-0) offense eventually "clicked" in a big way, as the team went on to score four more touchdowns and a successful field goal attempt to top the Baltimore Brigade (1-1) Friday evening at Royal Farms Arena, 36-27. The Soul start out 2-0 for the third straight season.

With the win, the Soul snapped a three-game skid at Royal Farms Arena, while Dolezel earned his 90th career AFL victory to become the ninth-ever league coach to reach the milestone. Dolezel now needs just four more wins to pass current Washington Redskins coach Jay Gruden for the seventh most in AFL history. Dolezel is now 90-40 all-time (including playoffs), and 79-32 as Soul coach.

“It’s difficult to go on the road on a short week," Dolezel said prior to Friday's matchup, "but we know what to expect and how to prepare. We’re certainly motivated after last season.”

The Soul's motivation that Dolezel referenced stems from their two postseason defeats to the Brigade in the opening round. The Soul entered just 6-5 against the Brigade all-time, and 1-4 all-time at Royal Farms Arena.

Defense played a key part in the Soul's victory, just how DB James Romain's two pick-sixes in the season opener played a huge role in the 48-41 opener win over Atlantic City last Saturday.

The Soul defense forced the Brigade to turn the ball over on downs three times; it also, on special teams, blocked two PAT attempts. Thanks to the strong defense, the Soul offense scored as many as 16 unanswered points in the second half, helping the team recover from being down 12-14 at the end the first half.

Soul rookie DB Lenroy Neysmith picked up his first career interception to secure the Soul win late in the fourth. It was the Soul's third interception of the season, adding onto Romain's two pick-sixes.