Playing in their regular season home finale, the Philadelphia Soul (5-4) will look for revenge — as well as improve their respective playoff picture — opposite the AFL-best Albany Empire (8-1) Saturday afternoon at the Wells Fargo Center.

After losing three straight games (May 11-26), the Soul have now won three of their last four games, outscoring opponents a combined 143-99 among the victories. The Soul last faced the Empire at home on May 11 (Week 3), and fell 57-48 to start their three-game skid stretch.

The Soul face a tough task on the defensive front opposite reigning league MVP QB Tommy Grady and his top target, WR Malachi Jones. Grady has completed 70 percent of his passes this season, while logging the most passing yards (2,390) and touchdowns (54). Jones has reigned in more than 300 receiving yards than any other receiver this season (1,074), having recorded seven 100-yard receiving games.

The Soul are giving free tickets for the home finale to children 14 and under, with the purchase of an adult ticket. Visit www.philadelphiasoul.com/kidsfree for more information; enter discount code KIDS at checkout.

The Empire scored a touchdown on every possession, while Grady completed a season-high 82 percent of his passes and threw seven touchdowns.

The Soul, meanwhile, scored on five of their seven chances, as WR Lonnie Outlaw posted a career-high 191 receiving yards and three scores. Outlaw has only 305 yards and five touchdowns in all other games combined this season. 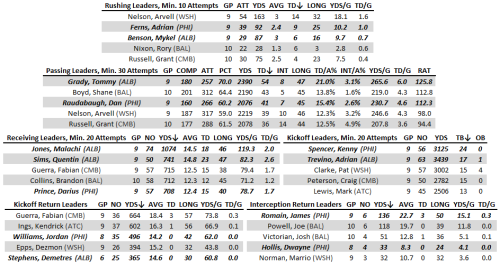