Eagles Flyers Phillies Sixers About Us Write For Us
Soul Set to Begin 2nd Half of Season Against Reigning Champion Valor
Around the NHL: Bruins Roll to Win, Game 7 Wednesday Night

Soul Come Up Short, Fall Below .500 After Loss to Valor 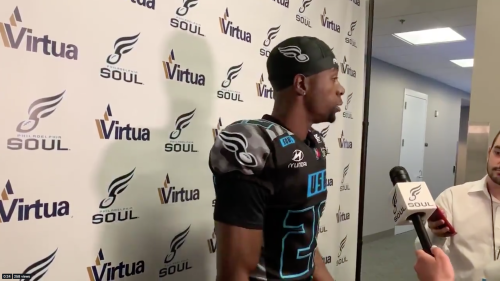 Philadelphia Soul DB James Romain is one of just two players in the Arena Football League this season with four interceptions, with the latest coming in his team's 48-41 loss to the Washington Valor on Sunday, June 9, 2019, at the Wells Fargo Center. Romain is the only player in the AFL with multiple pick-sixes (3) (Matt Rappa/SportsTalkPhilly.com).

The Philadelphia Soul (3-4) — hosting the second game of their season-long three-game home stand Sunday evening at the Wells Fargo Center — failed to revenged their 53-46 Week 4 road loss to the Washington Valor (4-3), as they fell for the second time this season to the the reigning champions, 48-41. The Soul have now lost four of their last five games; if the season ended after Week 7, the Soul would have the fourth and final playoff spot.

With the loss, the Soul's all-time record against the Valor now stands at 6-3. Soul QB Dan Raudabaugh completed just half of his 42 passing attempts, totaling 296 yards and five touchdown passes. Raudabaugh has now thrown at least five touchdowns touchdowns (36 total) in each of his six career games opposite the Valor.

The first three plays of the game resulted in either a fumble or interception, with the two last two plays resulting in turnovers. On the opening kickoff, Valor DB Jadar Johnson forced a fumble, however the ball flew into the stands to remain Soul ball. Then, QB Dan Raudabaugh completed a nine-yard pass to WR BJ Bunn, who fumbled through the efforts of LB Alvin Ray Jackson; DL Zack Bullock recovered.

On the Washington's very first play on offense, QB Arvell Nelson's pass in the end zone was intercepted by Soul DB James Romain, who was shaken up on the play. Romain's interception was his fourth this season; his first three all resulted in pick-sixes (Week 1 vs. Atlantic City, Week 6 vs. Destroyers).

The Soul ran right down the field, highlighted by Raudabaugh's 37-yard pass to WR Darius Prince. Three plays later, FB Adrian Ferns' 2-yard rushing touchdown, his fifth of the season, put the first points on the scoreboard. Ferns' touchdown was his first since Week 3 (vs. Albany Empire). He also had three rushing touchdowns in the season opener against the Blackjacks.

The Valor responded their next possession, with Nelson finding WR Douglas McNeil III in the end zone on a 5-yard pass; the Valor extra-point was no good (7-6 Soul lead).

A 10-play possession — that began with 6 minutes to go in the first and ended with 13 and change to go in the second — resulted in Raudabaugh's first passing touchdown, a 6-yard throw to Ferns to give the Soul a 14-6 lead after kicker Kenny Spencer's extra-point was goo. The score was Ferns' first career touchdown reception and 10th career touchdown overall; he had nine career rushing touchdowns prior, including his one earlier in the game.

The Valor needed one less play to shrink their deficit back to one; Nelson completed his second touchdown pass (3 yards) to McNeil III.

The Benji McDowell-led Valor failed their onside kick attempt, but ended up getting the ball back anyway. With the Soul threatening on the Valor 1-yard line, Raudabaugh fumbled and lost possession.   Washington added seven points off the turnover, as Nelson went on to complete a 8-yard touchdown pass to WR Reggie Gray (extra point good), his third passing touchdown of the contest.

Raudabaugh entered the half completing just seven of his 18 passing attempts for 116 yards. The Soul entered down 20-14; they trailed at the half in 9 of last 10 games. The Soul made up for their turnover near the end of the second, when DB Dwayne Hollis picked off the Valor's Nelson on the opening drive of the second half, his second interception of 2019 (both against Washington). Raudabaugh soon after completed a 2-yard touchdown pass to rookie WR BJ Bunn, Bunn's third; he grabbed two touchdown catches — the first of his career — in the Soul's 47-35 Week 6 against the then-winless Columbus Destroyers. Spencer's extra-point kick was good giving the team a 21-20 lead.

The game was tied 27-27 after three quarters, but it did not stay that way for long. On the first play of the final frame, Nelson completed his fifth touchdown pass to McNeil III, his career-high-tying fourth of the game and team-leading 11th since returning from injury in Week 4. McNeil also posted four scores in the Valor's loss to the Albany Empire last weekend.

With just over 5 minutes to go, Raudabaugh completed his fourth passing touchdown of the game, 33rd of the season, and 767th of his career to Prince — marking Prince's 10 straight game dating back to the 2018 season with a score. His now-10-game scoring streak is the longest active such streak on the team.

The Valor retook the lead with just 2 minutes and change to go (Nelson 45-yard touchdown pass to Gray); but the Soul answered with a touchdown of their own (Raudabaugh 33-yard pass touchdown pass to Prince).  Nelson put matters into his own hands to record the game-winning score with a one-yard rushing touchdown; with the extra-point good, Washington took a 48-41 lead with 20 seconds to go.

The Soul could not put together a comeback; Raudabaugh threw an interception on the last play, sealing the Soul's loss to the Valor for the second time this season.

.@soulfootball QB Raudabaugh looking ahead to a Week 8, home against @aflblackjacks: “We need to send a message this week to ourselves in practice.” pic.twitter.com/KsvSKGeXNI