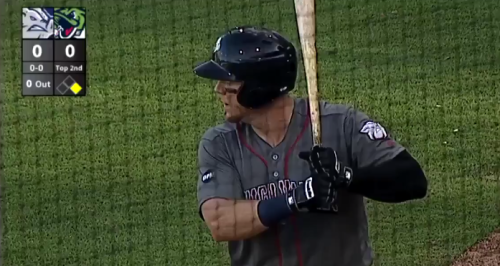 On his first pitch seen, with a runner on first and nobody out in the second, Morrison drilled a two-run home run to dead center. "LoMo" started the game at first base, batting fifth.

Logan Morrison’s first hit with the IronPigs is a two-run bomb to center to give Lehigh Valley a 2-0 lead pic.twitter.com/1B0T3EUknu

The Phillies signed the nine-year veteran on Saturday to a minor-league pact. Morrison, 31, requested his release from the New York Yankees earlier this month because he did not have a path to return to the majors. With the Phillies, there is more of an opportunity to log MLB outfield innings, not only because of the injured Andrew McCutchen and the disciplined Odubel Herrera, but also because of the recently injured Jay Bruce.

Bruce left Tuesday's game against the Dodgers with a strained right oblique, suffered when swinging opposite the Dodgers' Walker Buehler in the bottom of the third inning. Roman Quinn replaced Bruce, who has also recently been sidelined due to "mild soreness" in both his Achilles tendons

While Nick Williams may receive the call-up to replace Bruce if he is injured list-bound, Morrison could also receive equal consideration, especially since his bat is hot given his two-run blast during his IronPigs debut. Williams, meanwhile, entered Tuesday hitting .355 with a 1.084 OPS in 103 plate appearances since his demotion.

Logan, I am happy to see you are at it in good form. Prayers for more. Love Gma