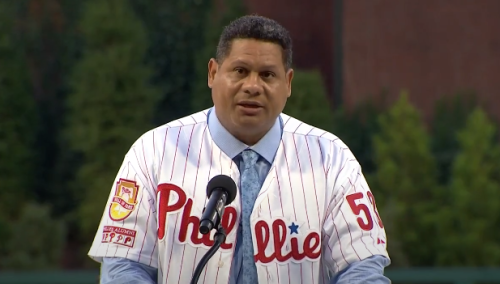 The 41st member of the Phillies Wall of Fame, 2019 inductee Bobby Abreu.

Philadelphia Phillies legend Bobby Abreu was bestowed with the team’s highest honor Saturday evening, as he was inducted into the Phillies Wall of Fame.

The newest member of the @Toyota Phillies Wall of Fame: @BobKellyAbreu! pic.twitter.com/jitkql1GfB With the Phillies, the Maracay, Venezuela, native earned two All-Star nods (2004-05), one Silver Slugger Award (2004) and one Gold Glove Award (2005), and in 2005 became the first Phillie to win the Home Run Derby. Also, Abreu slugged the first regular season home run in Citizens Bank Park history on April 12, 2004, against the Cincinnati Reds.

Plus he hit the first-ever home run at Citizens Bank Park. pic.twitter.com/lsH8z0ugjO

During his speech Abreu thanked those who helped him achieve success in his career, including the late John Vukovich, Harry Kalas and David Montgomery.

Only Abreu and the following six other players in MLB history tallied 550 doubles and 400 stolen bases in their careers, according to George Stockburger: Tris Speaker, Ty Cobb, Craig Biggio, Honus Wagner, Paul Molitor and Barry Bonds.

Abreu will be on the Baseball Hall of Fame ballot for the first time this winter.