The odds seemed stacked against free agent outfielder Logan Morrison.  After signing a minor league contract with the Phillies, the Phillies saw the emergence of Adam Haseley, Jay Bruce come off the injured list, and then the Phillies traded for Corey Dickerson.   Nick Williams was a left-handed option, too.

With all that, Morrison appears to be getting his shot.

Jeff Passan of ESPN reports that Morrison is being called up to the Phillies:

Logan Morrison is being called up by the Philadelphia Phillies, sources tell ESPN. The veteran left-handed hitter has been a force this season at AAA, hitting .308/.369/.640 between stops with Yankees and Phillies. He’ll join a struggling Phillies offense looking for a spark.

What motivated the need is not totally clear. In last night's victory over the Chicago Cubs, the newly-acquired Dickerson took a ball off his hand.  Dickerson exited the game in favor of Sean Rodriguez. After the game the Phillies reported that the results were negative and that Dickerson had a bruise.

Dickerson could sit out for 10 days to heal. Center fielder Adam Haseley has a minor league option , but that would leave Roman Quinn as the lone center fielder on the roster.

Morrison has a chance to stick if he can provide some offense.  Capable of playing both the outfield and first base, Morrison could take some at bats at first base in place of the struggling Rhys Hoskins while the team tries to get Hoskins going again.  Should Dickerson be hurt, presumably Morrison will get some at bats in left field.

Morrison used to have regular Twitter conversations with Phillies fans, even wearing a Phillies t-shirt once back in 2011. In 18 games at Triple-A Lehigh Valley, Morrison has hit .356 with three home runs and 12 runs batted in. 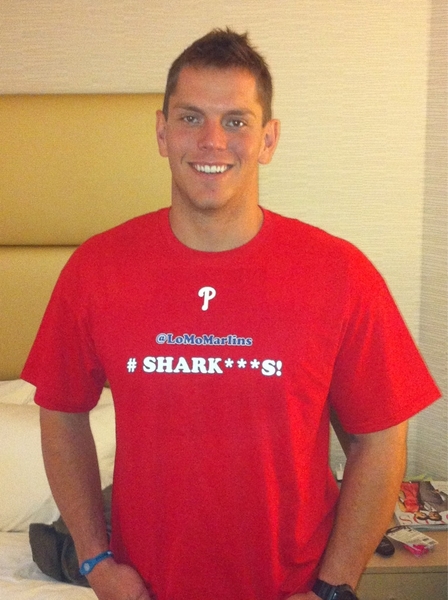