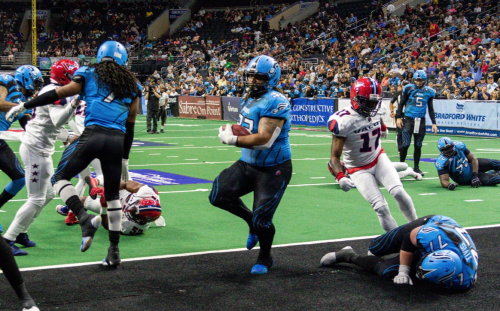 Amid their eighth straight postseason run, the Philadelphia Soul will compete in the Arena Football League championship game — the ArenaBowl — for the sixth time in franchise history and the third time over the last four seasons.

On Sunday, the team defeated the reigning league champion Washington Valor at the Wells Fargo Center — the second of a two-game, home-and-home playoff series — 48-42. The Soul either needed to win or lose by no more than 35 points on Sunday to clinch a berth to the ArenaBowl, given they gained a 36-point advantage in the aggregate-deciding series, also defeating the Valor last Sunday, 69-33. The total aggregate score was 117-74 in favor of the Soul.

By advancing to the championship with the playoff series sweep, the Soul tie the Detroit Drive for the fourth-most ArenaBowl appearances in AFL history, bested only by the Arizona Rattlers (10), Tampa Bay Storm (8) and Orlando Predators (7).

ArenaBowl 32 will take place next Sunday, August 11, against the Albany Empire at the Times Union Center in Albany, New York.

The Soul wasted no time adding to their aggregate lead. Following a Valor turnover on downs to start the playoff contest, Soul QB Dan Raudabaugh connected with First-Team All-Arena WR Darius Prince on the first play of their opening drive for a 23-yard score. Prince has scored in 17 straight games dating back to last season, and would finish with two more, including the game-winner with just over two minutes remaining. In four games against the Valor this season, Prince logged 433 yards and nine scores.

Second Team All-Arena FB Adrian Ferns added onto his impressive season, scoring two touchdowns of his own, one rushing and one receiving.

Desperate to try to regain ground in the aggregate scoring, the Valor attempted seven onside kicks, however six of them were recovered by the Soul.

Washington Second Team All-Arena QB Arvell Nelson threw for 363 yards and four touchdowns, yet again found himself under pressure like in Week 1 of the playoffs. The Soul defense picked off Nelson twice and sacked him a season-high five times.

In Week 1 of the two-week, home-and-home playoff series at at Capital One Arena, the Soul came ready to play in all phases of the game, and came away with their second-largest playoff victory and the largest on the road. The Soul offense posted its highest point total all season (69), scoring on all but one drive, along with Torez Jones' onside kick recovery touchdown.

Defensively, the Soul limited dual-threat Valor QB Arvell Nelson to just a 56.4 competition percentage, as opposed to Raudabaugh's 73.9. Soul franchise interception leader James Romain picked off Nelson three times in the win. Nelson also was sacked twice by the Soul defense and lost a fumble at the Soul’s two-yard line; he was the league leader in total offense during the regular season, but was limited to just four rushing attempts for 24 yards due to being under pressure.

While the Soul were outscored 7-6 in the opening quarter, they would outscore their opponent on each of the final three quarters: 14-0, 21-13, and 28-13. The Valor opened the second half with a touchdown, shrinking the Soul lead to just seven points. Clint Dolezel's team stuck to its game plan, however, combining a key onside kick recovery, strong offense, and defensive turnovers.

The Soul are 1-2 against the Empire this season, with one of the losses coming in the final game of the regular season, a matchup that featured both teams’ backup quarterbacks for the entire second half.