Alain Vigneault Finally Gets His Surprises for Flyers 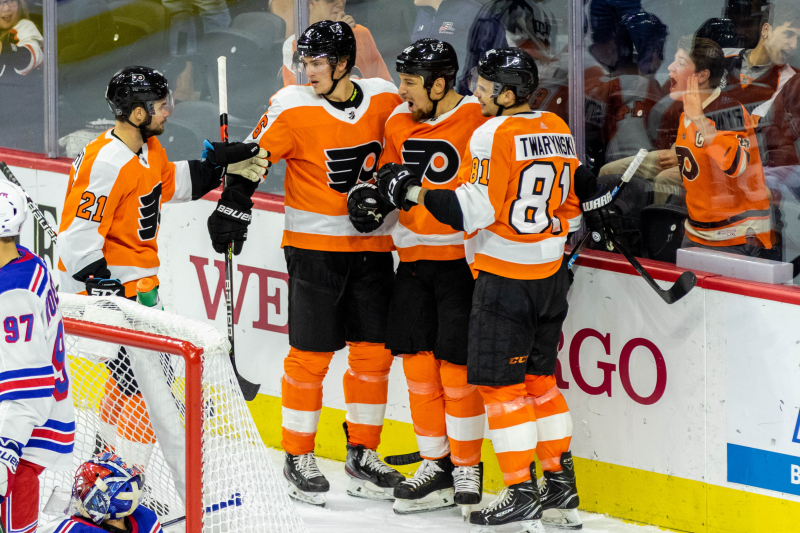 On the second day of Flyers training camp, Alain Vigneault had a request of the large group of players in camp. There were plenty of established veterans in camp, but with a lot of prospects as well, Vigneault wanted to see something.

“We’ve got some decisions to make. That’s what you want in camp. You need surprises,” Vigneault said. “We need some of these young kids to step up and force us into some decisions. That’s how your team get better. We’re going to give them obviously an opportunity to do that.”

After six games and two weeks of camp drills, it appears that Vigneault got what he wanted. In the final days of camp, four prospects were still hanging around and forcing the Flyers to make decisions. For three of them, it appears the decision is clear. They left the Flyers with no choice but to leave them on the roster.

Obviously, all eyes were on Joel Farabee and Morgan Frost from the start of camp. Farabee started off playing alongside Claude Giroux and Sean Couturier, in place of the absent Travis Konecny, still working on a new contract at the time. He got a game with the two veterans that was fairly solid.

Farabee has done everything in the preseason except score. It’s certainly not for a lack of trying. Farabee had five shots on goal in Thursday’s shootout loss to the Rangers and 10 shot attempts, two of which hit the post. In every other aspect of the game, he has proven he can handle the pace and physicality. And he’s only improved with each passing game.

Frost may not have been very far behind if not for a groin strain that kept him out of game action twice. He missed the first two games of the preseason recovering, played in the next two, then sat out the last two. The lack of preseason games likely hurt his cause, since Frost certainly looked the part in the games he played in. But Frost will head to the AHL after a strong training camp effort and he’s certainly on the short list among call-up options.

While all eyes were on Farabee and Frost, Carsen Twarynski and Connor Bunnaman were hanging around at training camp through several rounds of cuts as well.

Twarynski was the Flyers best player in a 4-1 win over the Rangers last Saturday, getting rewarded for his efforts with a goal. He scored again in Monday’s overtime loss in Boston. Bunnaman also scored a power-play goal in Monday’s game and has been called the best player in camp by Vigneault. They may be somewhat off the radar -- Twarynski also had a strong camp last year and was one of the final cuts then -- but they have stood out in games as surprises. Again, here come two young prospects that have forced the Flyers to make a decision in their favor. It appears that they, too, have made the team to start the season.

Midway through the preseason, it didn’t seem like the Flyers had any surprises. Even with Farabee and Frost looking the part of NHL players, no one had stepped forward with point production to go along with solid play. It was certainly a question if point production was going to matter in decisions.

The final week of the preseason, before the Flyers left for Europe, proved to provide some clarity. Twarynski scored in back-to-back games. Bunnaman got a shot down the middle and looked solid. Farabee continued to get better and generate more opportunities, even if he wasn’t scoring. For all three, it happened as the opposing lineups just got better and better.

If you asked people which prospect was going to make the team out of camp, assuming only one would, many would have thought Frost would have been it. Well, surprise, 19-year-old Joel Farabee will make the jump from first-round draft pick to college freshman to NHL rookie. Carsen Twarynski and Connor Bunnaman, two mid-round picks from the 2016 NHL Draft, have earned their spots.