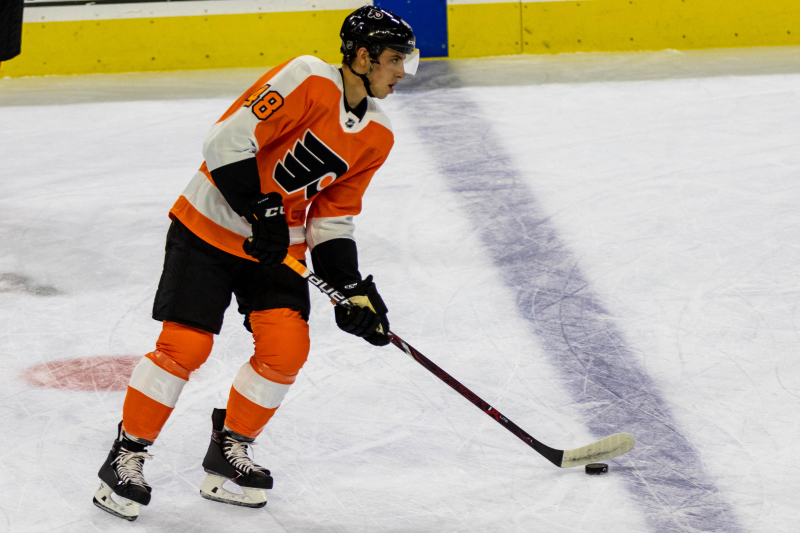 Prior to the Flyers final preseason game in the US, a 2-1 shootout loss to the Rangers, there were a few updates on the roster that provide a lot of clarity as the season draws closer.

In his pre-game media availability, head coach Alain Vigneault noted that Morgan Frost had been told he would start the season in the AHL. Frost, who is recovering from a groin strain, cannot be officially sent to the minors until he is off the injured list. GM Chuck Fletcher confirmed the decision during an intermission interview on the Flyers Radio Network.

Fletcher also provided an update on Nolan Patrick on Thursday afternoon. Patrick has not been able to fully participate in practice since the start of camp. As expected, he will not be ready to play in the season opener next week.

In this update, there was more clarity on what has been ailing Patrick to this point. The 21-year-old forward was diagnosed with migraine disorder and remains week-to-week.

Fletcher also spoke in more detail about this during the intermission interview and noted that Patrick’s family has a history of migraines and did have issues as the result of a concussion suffered in the final week of the regular season in April.

With Frost being sent down and Patrick officially out with injury to start the season, it would leave the Flyers with 25 players on the training camp roster. Andy Welinski is also injured and week-to-week, which brings the roster to 24.

As of Friday, Chris Stewart remains on a professional tryout, which does not count against the final roster. The Flyers are not going to sign Stewart as of yet, but are having him travel to Europe as an extra body in the event they need someone in the lineup in a pinch. Stewart can remain on PTO for the entire season and practice with the team, but cannot dress for a game without being signed.

With these four players not factoring into the final roster, it would appear that Joel Farabee, Carsen Twarynski and Connor Bunnaman have earned roster spots. The Flyers have to have a final roster with a maximum of 23 players submitted by 5 p.m. on Oct. 1, but Fletcher did note earlier in the week that there are expected to be a lot of changes between the Flyers and Phantoms rosters in the first six weeks of the season.

The Flyers will officially leave for Europe on Friday night. They have a preseason game in Switzerland on Monday against Lausanne HC before traveling to Czech Republic for the regular-season opener against the Chicago Blackhawks.