Eagles Flyers Phillies Sixers About Us Write For Us
Postgame Report: Redskins vs. Eagles
Eagles Evaluation: Eagles Start Season Off Right Against Redskins 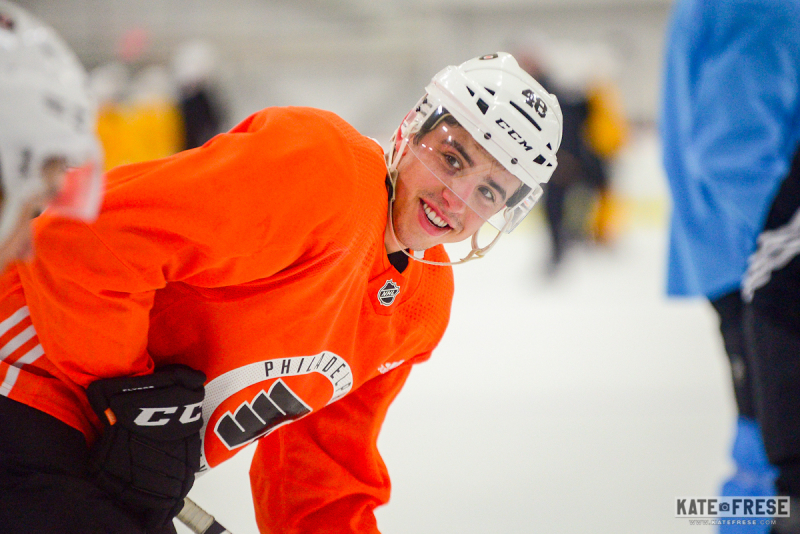 At Flyers Rookie Camp, it's become the orange line. The three players wearing orange jerseys at the first two days of Rookie Camp all figure to be a part of the Flyers future, maybe someday soon. After all, in a week they will be competing for a spot on the Flyers roster.

The trio of forwards are first-round picks Morgan Frost and Joel Farabee and second-round pick Isaac Ratcliffe. The line has stood out significantly in the first days of Rookie Camp, and the idea that the line could play together for the Flyers someday is certainly a glimpse into the future.

Just don't tell Phantoms head coach Scott Gordon, who is running the Rookie Camp, that one of them may fall into place at the NHL level immediately this season.

"Sometimes I say this is going to be a pretty good line for the Lehigh Valley Phantoms," Gordon quipped on Saturday at Rookie Camp in Voorhees.

It may only be a couple of days of practice for the three rookies -- all turning pro full-time for the 2019-20 season -- but the chemistry is starting to form early.

"With those two guys, we're all really good friends off the ice, so it helps with the on-ice chemistry," Frost said. "You're obviously trying to do things to stand out, but I think if we just feed off each other, play our own games, I think we'll work well together and that shows well individually if you play well with other guys."

"It's been really good. Morgan and Isaac are world class players so it's really fun to play with them and it's super easy," Farabee said. "I think as we keep forming chemistry it will keep getting better and we hope to have a pretty good game."

"It's kind of funny to look at it now, three young guys kind of battling for a spot," Ratcliffe said. "We're staying close, we all bring something different to the table. It's going to be exciting Wednesday and playing alongside those guys."

For all three players, the previous year allowed for an opportunity to be showcased in different ways. Frost got a taste of the NHL during the preseason with the Flyers. It was just one game, but that experience, coupled with some time in the World Junior Championships, proved to be valuable.

"Definitely that one exhibition game helps and even the rookie games are super competitive so those experiences help," Frost said. "Even World Juniors, I think that's a pretty fast-paced game and definitely comparable to a pro hockey game. Those experiences definitely help."

Ratcliffe also played in World Juniors and got a brief stay with the Flyers during the preseason last year. His junior team, the Guelph Storm, reached the Memorial Cup with him as captain of the team and a top scorer with 50 goals. Playing an extended schedule against a variety of opponents helped Ratcliffe adjust to what the speed of the game may be at the next level.

"All those tournaments, all those games, it's all extra hockey and it's all different speeds and you get to play against different players," Ratcliffe said. "It's really exciting to get those opportunities and it's definitely going to help my future."

For Farabee, this is his first venture into Rookie Camp and main camp starting on Friday. Farabee spent his first season after being drafted playing college hockey with Boston University and reached the Gold Medal Game at World Juniors with Team USA as part of a talented US program. It put Farabee on a stage where he play against a lot of older players and mature his game.

"Playing at World Juniors and a year at college, my game has matured a bit just in this last year," Farabee said. "Just playing against older guys at school really helped and I think it will help me going into my first camp and my first pro season."

Gordon has seen his share of young talent come into the Flyers system over the years. He's been behind the bench for the Lehigh Valley Phantoms for parts of four seasons, until he was named interim coach of the Flyers last December. When the Flyers hired Alain Vigneault as their next head coach in the offseason, Gordon chose to return to the Phantoms as the AHL head coach.

He figures to get some portion of the trio, but there is no guarantee that all three start the year in the AHL if they perform well enough to earn an NHL spot. Even if all three were to end up in the minors, it probably wouldn't be for long. Gordon believes this is the most talented group of young forwards to transition to the pro level at the same time.

"I think we've always had a consistent amount of rookies that have turned pro, but this year they're all forwards," Gordon said. "It's forwards, but there's a lot of talented forwards. I would have to say that I don't know that we've had any forwards come in that have been at the level of some of the kids we're getting this year."

Gordon also found something about each player that stood out in their progression over the first two days of camp. For Frost, Gordon noted twice how much he liked his pace. For Farabee, it was the adjustment to playing in a small sampling of a pro system. For Ratcliffe, it was the added strength he has displayed.

"The one thing that stood out to me when we were doing a forechecking drill was I liked his pace," Gordon said of Frost. "It was significantly more than it was last year from what I remembered. I think that's encouraging. He's so poised with the puck. Sometimes you slow the game down at the wrong instances in juniors, you can get away with it and next thing you know you're getting chased from behind by faster and stronger players in professional. That's the thing I'm going to keep my eye on and hopefully he can have a training camp here and not have it be an issue and maybe that ends up being one of the reasons he can play here.

"For Farabee, it was a little different because he wasn't here for training camp [last year]. All we saw him was in development camp which is more skill than anything else. Even though we didn't do a lot of 5-on-5 stuff, to basically go up and down the ice in a systematic way and play the game from one end of the ice to the other end of the ice, I thought he did very well. With Isaac, the one thing to me that stood out is his strength. He has a little more meat on him and seemed a little more strong on his feet in puck protection. They're doing the right things."

If Frost, Farabee and Ratcliffe keep doing the right things, they will make their way to the Flyers very soon. It's why it has been so easy to get caught up in the potential that these three could not only become future Flyers, but future linemates, just as soon.