The Eagles went into Dallas following a brutal loss to the Vikings and decided, for the most part, that they wouldn’t play the game.

With just a handful players even attempting to win, it should come as no surprise that the Birds were blown out again.

There was next to nothing salvageable from this game and the season might very well be over. Two blowout losses to average teams and a 3-4 record does not bode well for a team set to play the Bills, Patriots, Bears and Seahawks four out of the next five weeks.

Looking at the rest of the season, it wouldn’t be a surprise to see the Eagles go 3-6 the rest if the way based on their play the last two weeks.

Back to being blown out in Dallas.

Akeem Spence became a starting DT in each of the Eagles halves as the team lost Hassan Ridgeway in the first half and, following his return, the team lost Fletcher Cox in the second half. That actually leaves Spence as the only healthy DT on the roster.

Sidney Jones and Ronald Darby were active for the game in Dallas and Orlando Scandrick remained a starter along with Jalen Mills and Rasul Douglas on the outside. Craig James played more than the Jones-Darby duo, so that is excellent news if you view it as a corner signed mid-season moving up the depth chart.

Other moves that weren’t made but probably should have been included putting Big V in at right tackle and throwing JJ Arcega-Whiteside out there. At this point, it doesn’t matter who JJAW replaces, he can’t be less effective than any of the three receivers on the team.

Mills returned from injury and was easily the best player on defense. The Cowboys targeted him early and essentially stopped doing so to target literally anyone else. Mills finished with a lot of tackles, but he managed eight tackles because of his effectiveness in the run game.

Mills had the Eagles only defensed pass and the only big play he gave up was in the best coverage the Eagles have seen all year as it was just a perfect pass from Dak Prescott. Additionally he had an INT to prevent a touchdown and would have had a second to prevent another score had he not been pushed out of the way by an Amari Cooper OPI.

At least one #Eagles player wanted to win. Should have had a second INT were it not for the OPI. pic.twitter.com/1VG322sjN6

McLeod had six tackles (a half a tackle for loss) including two solo tackles. He wasn’t great, but he was good. The Cowboys went after Jenkins instead of McLeod in this one.

Curry only had four tackles in this contest with three being solo tackles. That said, he also played with some purpose. On plays where other Eagles defenders seemed to give up and flop to the ground like Malcolm Jenkins on the run that was initially called a touchdown, the big lineman got downfield and did not give up on plays. He ended up playing more inside snaps with the injuries to two of the Eagles three DTs, but he at least had some spirit and cared enough to not quit on plays.

Remember when Lane Johnson was good? When he was the best right tackle in the league? That’s not the case now. Johnson was essentially a turnstyle in this one. I’ll go so far as to admit he was more effective than I could have been, but not by much. Andre Dillard allowed some pressures from the right side, but Carson Wentz was under pressure from the right side almost all day and right guard Brandon Brooks again looked solid in this one.

Lane admitted post game that he was bad and that one of the fumbles was on him, but that doesn’t change how awful he was. He has not been consistently dominant since 2017. He better get some consistency going soon if he wants to earn another big contract.

This game ain’t for suckers and that includes guys with a big mouth and a C on their chest who get run over in the open field because they are incapable of making the tackle to prevent a touchdown and are exposed multiple times in coverage.

Malcolm Jenkins picked a good time to try for a new contract, because his uninspiring play his sudden lack of energy in the secondary is not going to earn him a new deal like he was hoping.

It might be fair to call Agholor a bust now. The Eagles were able to capitalize on the one season Agholor was a decent receiver and win the Super Bowl, but he has not been great since then. In 2019, he’s been getting paid $9.4 million to be a receiver that isn’t even servicable. Every game this guy has a deep pass that will lead to a touchdown or extend a potential game winning drive and either drops the ball, is to lazy to dive for the ball or has no idea where the ball is. It doesn’t matter which it is, the end result is the same – he is not a good receiver and his pay next year is likely to be close to the minimum as a team hopes that they can build on his one effective season out of five years playing.

Just one game until the season is halfway over and Agholor has been the only starting receiver healthy for each game. That translates to 254 yard. The Dolphins are the worst team in the league and they have an undrafted rookie receiver more effective than that.

According to PFF, Nelson Agholor has caught the lowest percentage of catchable deep balls out of any wide receiver in the league (20%). Free agent after 2019.

Remember when Alshon was a good receiver? Those were times when you knew he was on the field. These days, he makes a two yard catch and then has to sit our for the next three plays with an injury.

Alshon was targeted early in the game for a big game and the ball bounced off of his hands. The Eagles only managed the first down because a Cowboys player hit him head to head following the drop. It turned out to be one of Alshon’s best plays of the season.

Just two seasons ago, Jeffery was a good receiver who created a bit of separation downfield and used his big body to make contested catches. Now he gets no separation and drops the ball just about every chance he gets.

If the Eagles had this Alshon Jeffery show up for more than 2 plays this season outside of the Redskins game, they might be in decent shape on offense. pic.twitter.com/fBYyQAFZLT

If you watched the game, you’d know that Brandon Graham was in the backfield a lot against Dallas. That would be great if he was able to get the runner down or record a sack. Instead, he managed just three tackles and just one quarterback hit. It was far too often that the veteran ended up in the backfield without even making contact with the runner as a juke threw him off balance or a double move had him diving at empty space.

Douglas was the teams top DB up until last week. This week, he fell even further. Douglas recorded five tackles, but was victimized routinely. On one drive, Douglas gave up a 40-yard reception that put the Cowboys in field goal range to score. Without that, the defense actually would have held the Cowboys to a punt.

The other play that stands out is one in which Douglas clearly committed the worse pass interference of both he and Amari Cooper and Douglas stood on the field throwing a temper tantrum for a flag. Of course he got one for his foul, but the worst thing you could do after you got beat while committing a penalty is stand around and act like you were robbed on the play and draw even more attention to the fact that you just got beat big time. 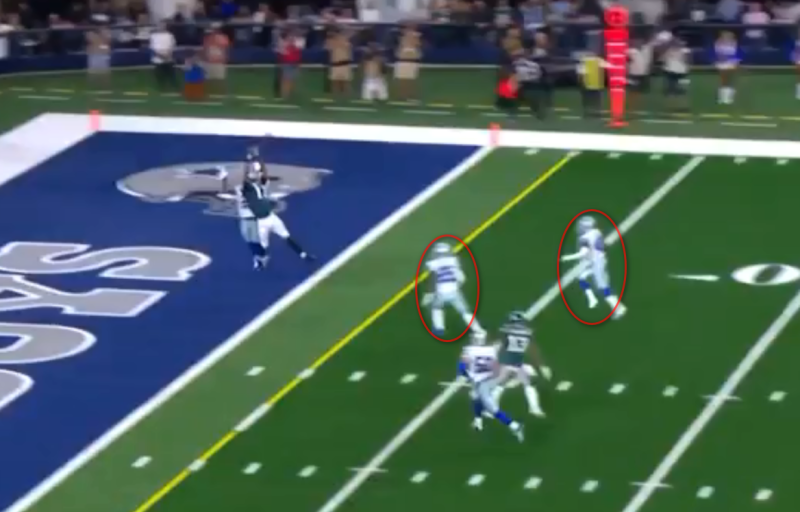 In theory, the team is supposed to be focused on the Bills, who they play in Buffalo next week, but perhaps the front office should be focused on who to keep and how they can improve for 2020.