Eagles Flyers Phillies Sixers About Us Write For Us
DeSean Jackson To Have Surgery, Could Be Done For Season
Flyers-Hurricanes: Game 14 Preview

The Phillies had to make a handful of moves by 5:00 p.m. on Monday, the day to set a 40-man roster at 40.  A number of players were on the 60-day disabled list and were not on the 40-man roster at season's end.  Those players had to be restored on Monday.  But the Phillies went deeper with their cuts than 40, bringing their roster down to 35.

Here is a rundown of the day's moves:

Neshek and Hughes were no surprise.  At the time of his acquisition, sp, efelt the Phillies would keep Vargas in 2020, given the high cost of a contractual buyout ($2 million).  But Vargas won just one game in a Phillies uniform after the July 31 trade deadline.  The Phillies will look for a better option.

No surprise here.  Arrieta had a one-year, $20 million option remaining on his deal.   At times last season, Arrieta looked like the player the Phillies were paying him to be.  But having ended his season on the disabled list and having had surgery, he would not have gotten a similar contract elsewhere.

The Phillies attempted to outright these players off of the 40-man roster and assign them to the minor leagues.  They could have taken that opportunity but instead chose free agency.  The Phillies could try to re-sign a player like Gosselin, who at this point in his career signs minor league deals.

Reinstated to the Roster:

Although Robertson is a sure bet to return to the 60-day injured list, he must be active for now.  Dominguez's future remains up in the air, too.  The Phillies just added Stock in a waiver claim from San Diego.

The next deadline for the Phillies is December 2, when they may choose to non-tender some players.  Candidates to be non-tendered include infielders Maikel Franco and Cesar Hernandez. 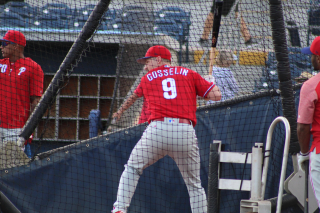 Please get some good starting pitching