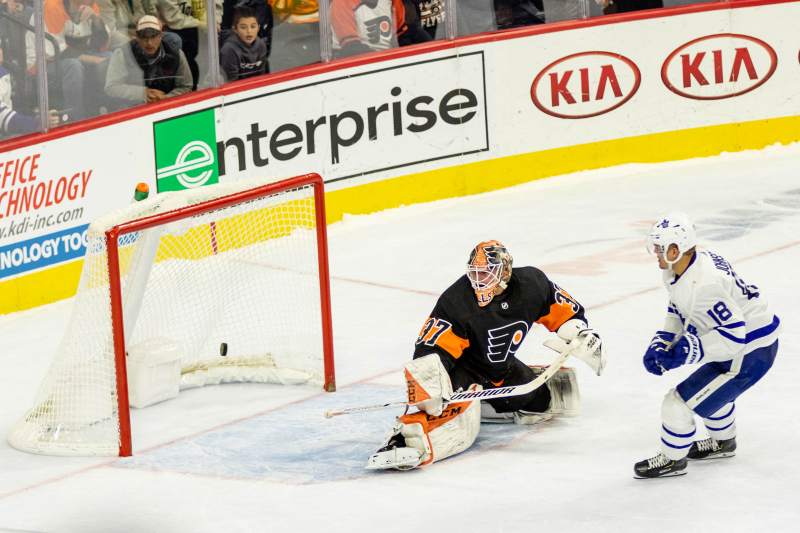 It started as you would expect a back-to-back against a well-rested Toronto team would have. The Flyers were clearly a step behind. The Maple Leafs were taking it to them and it appeared to be the start of another long night for the Flyers.

A fortunate goal got the score even and somehow the game was tied after one period. From there, the Flyers played the dominant forechecking game they have proven to be capable of and actually kept the game in their favor for some time. They got the game to overtime, earned a solid point in the standings, before falling in a marathon shootout that went 11 rounds in a 4-3 defeat to Toronto.

Here are some observations from the Flyers hard-fought effort against the Maple Leafs.

The Flyers entered the night with the lineup completely unknown. There were several players who were gametime decisions due to what Alain Vigneault called bumps and bruises. The Sean Couturier line stayed intact, but the other lines were shuffled.

Joel Farabee got promoted to the first line with Claude Giroux and James van Riemsdyk. Jake Voracek was moved down to a line with Kevin Hayes and Michael Raffl. Tyler Pitlick was back in the lineup on the fourth line.

Farabee didn't look out of place with the top line and actually added some speed and nearly cashed in on a couple of chances by just going to the net. Having Voracek on a lower line certainly helped give the Flyers some more balance. Voracek looked more energized in this game than any in the past week. Pitlick's speed was needed to keep up with the Maple Leafs as opposed to Chris Stewart, and after a couple of rough games, he played well.

It was becoming clear that the Flyers top line as constructed wasn't working and Vigneault made a change. It's one he should stick with for more than just a game.

It was an up-and-down night for Travis Sanheim. He was certainly a central figure on both of Toronto's first two goals, though he wasn't alone.

For the third straight game, Sanheim lost his footing and fell and it led to a goal, as Kasperi Kapanen sped by and scored on a breakaway. But part of the play was also the missed catch by Shayne Gostisbehere on a routine clearing attempt. In a first period where Toronto was clearly the better team, this actually was a rather harmless play. Morgan Rielly chips the puck to the neutral zone and Toronto is going to make a line change. Gostisbehere misplays the clear, Sanheim falls down and Kapanen takes care of the rest.

On the second goal, the puck is on Sanheim's stick before entering the net, but watch the rest of the Flyers around the net. Justin Braun is behind the goal line. German Rubtsov is right next to him watching the puck and reacts late. That allows more than enough time for Jason Spezza to get his stick in there and poke the puck into the net.

Sanheim did redeem himself with a good shot that left a rebound and got Frederik Andersen out of position before getting to his own rebound and scoring. Vigneault said Sanheim is having some growing pains, but that added "he is a real good kid. Coaches tend to be behind real good kids."

Vigneault had issued a challenge earlier in the week that the leadership group and top veterans needed to provide more. Claude Giroux answered the call with a great individual play on the power play to give the Flyers a 2-1 lead.

Giroux takes a pass from Ivan Provorov at the top of the left circle and slowly drifts down to the side of the net before tucking in a shot under Andersen.

Giroux also looked better at 5-on-5 than in the last week of games. Maybe that was the line shuffle or maybe just a more determined effort out of the captain. Whatever it was, the Flyers need more games like that from Giroux.

The Maple Leafs were a really good test for the Flyers because you won't find many teams in the league that can present a collection of fast skaters like they do. Kapanen was Toronto's best player in the game, constantly looking to get behind the defense. He did on his goal and used an excellent shot to put Toronto on the board first.

Auston Matthews did not have his best game, but again, can always look dangerous simply for his speed. Mitch Marner also made an impact on the game with his speed.

Farabee took a high-sticking penalty to put the teams at 4-on-4. Toronto is lethal at 4-on-4 because the extra open ice allows them to add more speed to their game. Marner made the Flyers pay with his speed following a neutral-zone turnover.

Couturier puts a pass in the skates of Travis Konecny and Marner steals. The Flyers defensemen are caught in a line change. Matt Niskanen tries to get over to cut off Marner, but Marner uses his speed to go past him. Brian Elliott overcommits and has no way of getting post to post before Marner can wrap it around and tuck it in.

The Flyers are never going to be the fastest team collectively. This much is pretty well known after 13 games. But they have to try to maintain good positioning as much as possible, especially against teams like Toronto that can kill with speed.

For most of the final two periods, the Flyers handled Toronto's speed pretty well. Just a few lapses happened to end up in the net.

For 60 minutes, this was a fairly entertaining hockey game. The 3-on-3 overtime, which featured a Flyers power play and several back-and-forth odd-man rushes — a 2-on-1 for Giroux and Konecny, a 2-on-1 for Matthews and Marner, a breakaway for Konecny all in the final minute — the shootout was an anti-climatic ending to an entertaining overtime.

To make matters worse, not only does the game have to end with the skills competition, no one could score for seven rounds. Finally, Konecny broke the ice in the eighth round only to be matched by Spezza. Three rounds later, Andreas Johnsson ended the game.

Take the Flyers record in shootouts out of play. There are plenty of other games between two teams that perform far better in shootouts that don't deserve to have games end like this. 3-on-3 overtime is exciting and action-packed. There simply has to be a better way to end hockey games than this.