Eagles Flyers Phillies Sixers About Us Write For Us
Flyers Extend Points Streak, Fall to Capitals in Shootout
Sec 247 Pod 61: Birds at the Bye- Rethinking Our Predictions 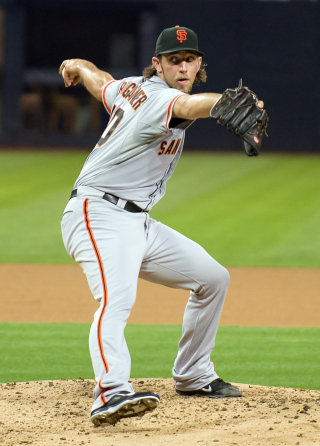 The Phillies have a large shopping list this winter.  That list is highlighted for a need for starting pitching.  As the offseason continues, the Phillies have been linked to one big name pitcher: free agent Madison Bumgarner.

Ken Rosenthal writes in the Athletic:

Yes, the Phils have checked in on Bumgarner, and likely are motivated to keep him away from the Braves, their NL East rivals. The Braves are the team closest to Bumgarner’s hometown of Hickory, N.C., and seem a more natural fit for him than the Phillies.

Rosenthal also notes that it's not a "sure bet" the Phillies reunite with Cole Hamels, who has many potential suitors.

Rosenthal notes the Phillies could add Hamels and Bumgarner for less than someone like Gerrit Cole would cost them.  Rosenthal calls Hamels "this year's J.A.Happ", a veteran lefty looking for what might be his last deal.  The two had similar numbers in the two seasons prior to free agency.  But Happ's two-year, $34 million deal he got with the Yankees might be too steep for Hamels suitors.

Jayson Stark, also of The Athletic, previously reported that the Phillies could add multiple starters this offseason.

Meanwhile, Jim Salisbury of NBC Sports Philadelphia has the Phillies involved in the third base free agent market.

According to multiple sources, Phillies officials touched base with Team Boras here at the general managers meetings this week and the two sides discussed a number of subjects — and not just pitching.

In other words, Moustakas is very much on the Phillies’ radar.

Mike Moustakas would give the Phillies a veteran, reliable bat at third base.

As Andrew McCutchen returns to left field, the Phillies would lose a regular left-handed bat from their lineup from the Jay Bruce/Corey Dickerson tandem that patrolled left field most of last season.  Moustakas would serve as a left-handed bat towards the bottom of the lineup behind the likes of Rhys Hoskins.  Moustakas will not require a longer-term deal.

The Phillies have been reported as trying to trade infielders Maikel Franco and Cesar Hernandez.  Both remain non-tender candidates by the December 2 deadline to offer contracts.    The money either requires in arbitration might not be worth it for the Phillies, who have much to add.