With the first 21 games in the books, here is a review of the Philadelphia 76ers first quarter of the season and a preview of the next quarter.

Philadelphia went 15-6 in their first 21 games, which included a tough west coast trip through Utah and Denver. The offense was inconsistent through the first 21 games, earning an offensive rating of 107.3 (17th in the NBA). The defense was as advertised heading into the season, posting a rating of 102.6, which is good enough to be the fourth best in the league. Despite the early swing through the Northwest division, the 76ers had the third easiest schedule behind only the Indiana Pacers and Detroit Pistons. Philadelphia's 10-0 record at home, while encouraging, camouflages the team’s mediocre 5-6 record on the road. When examining the East/West breakdown of the schedule, you see that Philadelphia handled the weaker Eastern Conference teams, winning 10 of 12 match-ups. By contrast, the Sixers have only won five of the nine games against west coast teams. Road contests, especially when traveling across the country, are difficult.

76ers fans have been overly critical of the team’s lack of outside shooters in the rotation, and while it is true there is no traditional sniper in head coach Brett Brown’s rotation, the team ranks 14th in 3-point percentage (35.7). The team ranks 26th out of the 30 teams in attempts per game from beyond the arc, with an average of 29.6 per game. Over the previous two seasons with sharpshooter JJ Redick in the back court, the Sixers' outside shooting numbers were not too different than the numbers this year’s squad is posting.

The 76ers are not reliant on the 3-point shot. Perhaps it is better said that they should not be concerned with forcing 3-point shots. Furkan Korkmaz is leading the bench in average minutes per game at the quarter pole, accounting for 22.9 minutes per contest. While Korkmaz does have eight starts to his name this year, he shoots more 3-point attempts (4.7 per game) than anyone on the roster not named Josh Richardson (5.2 per game).

When you look at the team’s offensive shooting numbers from the floor, both the 2-point field goal and 3-point field goal percentages are closely in line with what the team posted in 2018-19 season. When you start to examine the free throw attempts and conversion rate, a larger gap emerges.

While a drop off in points from the charity stripe accounts for the lions share of the 6.4 points per game lost in offensive output from last season to this one, the remainder can be chalked up to a decrease in field goal attempts. The 76ers are committing more turnovers per game this season, going from 14.9 per game to 16.5.

16.5% of the team’s possessions have ended in a turnover. Only the Pistons, Atlanta Hawks and Miami Heat are worse than Philadelphia in that regard. It could be a statistic that trends down over the course of the season as players become more familiar with each other. It is reasonable to expect that two new starters (Richardson and Al Horford) in the lineup would result in a lack of continuity to start the season. However, a high turnover rate is not conducive to playoff success, so it is an issue that will need to be resolved prior to the playoffs. When you think back to the end of the previous season, something that stuck out like a set of flashing red lights on the highway were the shot clock violations in crunch time. It is difficult for a team to score points when you fail to get a shot up. That cannot continue to be an outcome at the end of games if the team hopes to be legitimate contenders in late May into June.

Defense and rebounding have been bright spots for the team. General manager Elton Brand used the offseason to improve the size and length of his starting five and the return on that investment has paid off in the first quarter of the season, specifically on the defensive side of the ball. The 76ers lead the league in rebound percentage and are the class of the association when it comes to limiting second chance points. Ben Simmons has been playing at an elite level on the defensive side of the ball. Simmons shares the league lead in steals per game with Jimmy Butler at 2.4 per contest. Simmons is not just getting it done with steals, but he is also holding opponents to an impressive 40.2% field goal percentage from the floor. The 76ers went from being the 12th worst in points given up per game (112.5) to fourth best in the league (103.7). That 8.8 points per game swing on the defensive side of the ball is massive.

It is not that teams are shooting a low percentage behind the arc against Philadelphia. The opposition has converted 35.5% of their attempts, which is in line with the league average. The discrepancy comes in the number of 3-pointers attempted against the tall and long 76er defenders. Only 26.1 3-point shots are attempted per game compared to the league average of 33.4. That difference is worth 7.8 points per game at those conversion rates. The Sixers are tied with the Los Angeles Lakers for giving up the third fewest points per game, and it is fueled in part by the limited number of 3-point attempts taken against them. As the year progresses and the starting lineup grows its chemistry, it is reasonable to expect a slight decrease in the number of fouls committed by the defense and turnovers generated by the offense.

Looking ahead to the next 20 games

Seven of the next 20 games are against west coast teams, but of those, only two are on the road. Early in 2020, the Sixers will travel to Texas twice to play games in Houston and Dallas. The next 20 games are against opponents with a cumulative winning percentage of .580. Among the opponents on the schedule, the team squares off twice with the rival Boston Celtics, Heat, Indiana and the Dallas Mavericks. Going into the season, not many had Dallas circled as a formidable opponent, but 25% of the way through the regular season, Luka Dončić is playing like a legitimate MVP candidate and the Mavs are leading the league with an offensive rating of 116. The Celtics are ahead of Philadelphia in the standings along with the Heat. The Denver Nuggets make their trip east along with the Houston Rockets. The Milwaukee Bucks come to town Christmas day sporting a league best 11.8 net rating and the Toronto Raptors head to Philadelphia in early December for what fans on Broad Street hope to be a revenge game for the snake bitten Sixers. The team has three back-to-back pairings in the next quarter of the season, but none of the three contain two formidable teams and only one pair contains two road games (which are both in Florida). Of the teams they square off against, the majority of their tougher opponents have a high reliance on converting 3-point attempts to power their offense. The Sixers lead the league defending the arc, allowing only 9.3 makes per game – a full attempt better than the next best team. 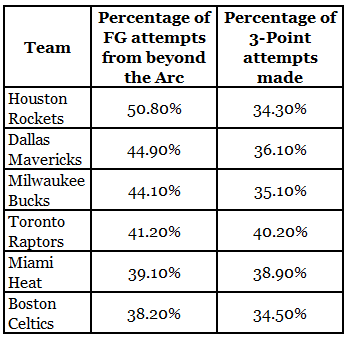 By limiting their clean looks from the perimeter, the Sixers can force teams into the less familiar mid-range game, where the points don’t accumulate as fast. Joel Embiid and Tobias Harris should look to use their size to post up smaller defenders early and often. Being more aggressive in the paint on offense early in games will help drive up free throw attempts and put the opposition on their heels in the second half hoping to avoid associated foul trouble.

View All Posts By Scott Cashin

View All Posts By Scott Cashin