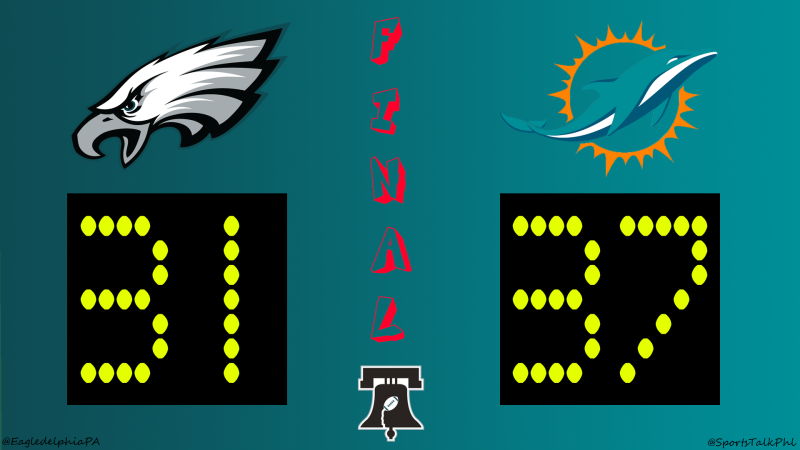 HAHAHAHAHAHA. The Miami Dolphins! We let the Miami Dolphins hang around and win. With everyone back from injury, we still let the woeful, 2-9, Dolphins beat us. We should've blown them out of the water (no pun intended). This team doesn't not deserve to be in any playoff conversation and should honestly be embarrassed by their performance this year. At the half, the Eagles were up 21-14, and they played down to their opponent for the entire second half. Here's what I saw in the back half of performance:

Sanders was one of the few bright spots for this Eagles team today. The Eagles offense should've put up a TON of points on the Dolphins but they didn't. Sanders ran that ball really well and at a good clip (4.9 yards per carry). He also caught the ball well with five catches and 22 yards receiving including a touchdown. Sanders is also still improving on his pass protection, too. He has made himself a solid 3rd down back with his improvement in protection as well as his unbelievable pass catching ability we've seen all season. Initially, I didn't love Howie Roseman taking Sanders in this past draft but he has certainly proved me wrong and I am excited for what Sanders can bring to this team in the future.

Defensive MVP: No One

How could there possibly be a defensive MVP when the Dolphins put up 37 points and Ryan Fitzpatrick rips apart the defense like he's playing against high schoolers? Old man Fitzpatrick sliced and diced this secondary and embarrassed this Eagles defense. DeVante Parker went for over 150 yards and made Jalen Mills look like a fool all day. Jalen Mills had his eyes glued in the backfield all day and didn't locate a receiver all day. When he did finally look in the general direction of a receiver, it was clear and obvious pass interference. The defensive line played well to start the game. They got some solid pressure on a couple stunts and forced Fitzpatrick to make some bad decisions but in the second half, they disappeared. The D-line was nowhere to be found in the second half and put the secondary in tough situations. Not to mention Patrick "Peyton Hillis Jr." Laird was a Swiss army knife for the Dolphins and was a difference maker for Miami. All-in-all, the Eagles defense let up 408 total yards to the Dolphins. Embarrassing. A joke.