The Eagles made it into the Wild Card Round of the playoffs with four of the five receivers on their initial 53-man roster unavailable and three of their four running backs unavailable.

Not only that, but the team also lost their starting right guard and with their right tackle unavailable in addition to their star tight end being just a few weeks removed from broken ribs and a lacerated kidney.

The offense was almost the replacements and Carson Wentz and Doug Pederson managed to rally these young guys with the rest of the veterans on the team past a point they probably should have been able to.

Unfortunately, that didn't matter as the human scum that is Jadeveon Clowney came into the game with the goal of knocking Wentz out of the game - and the referees allowed him to succeed.

The Eagles put up a good fight that almost assuredly would have been won had Wentz been available, but they fell one score short and will look to the future.

Coming in cold, the 40-year old Josh McCown actually played better than many expected while going 18 for 24 with 174 passing yards and 23 rushing yards no five attempts. He played with all his heart and gave the Eagles a fighting chance and put them in position where they could have won the game had the defense not given up three separate deep balls to setup both touchdowns.

McCown struggled in two areas last night: the red zone and holding the ball. If no one got open, McCown would stand around and try and weave in the pocket, losing yardage on six different sacks. That's the kind of issue you would expect with him coming into the game cold, desperately trying to make the big play.

Otherwise, McCown was electric in between the 20s, but could not get anything done in the red zone. There were certainly some plays to be made there with his tight ends, but McCown seemed hesitant to throw into these tighter windows than he did when there was open field. He lead drives of 55, 58, 64, 64 and 67 yards. You'd think that with no turnovers they'd have more to show for that than nine points, but the aggressiveness did not pay off.

Despite his struggles, he kept the Eagles in this game. It took Nick Foles four weeks to be truly successful at QB following Wentz's injury in 2017, so McCown's performance was not bad at all.

It would be fitting to make a joke about blind people being allowed to referee this game, but that would just be insulting tho those with visual impairments. These people were flat out incompetent and should not have jobs.

There is almost no one in the world that actually believes that the Clowney hit on Carson Wentz should not have been flagged, even if they don't think that the play was intentional. They said after the game he was a runner and did not give himself up, but Brandon Lee Gowton of Bleeding Green Nation points out that the same slide was called giving himself up earlier in the season.

Back in Week 2, Carson Wentz dove for the goal line on a two-point attempt and was ruled short because he gave himself up. pic.twitter.com/dR7jDIIgTe

Not only that, but they called a roughing the passer on Derek Barnett when an offensive lineman pushed him into Russell Wilson and then didn't when a DL pushed Josh McCown down long after the play or tackled him by grabbing his helmet. There could be perhaps no further incompetence, or perhaps rigging, to come out of the most stringent rules in the game designed to prevent player injuries.

There were plenty of other missed calls, but those are the types that typically balance out in a game.

Goedert was the only real target that McCown had for most of the game, catching seven passes on eight targets with the lone non-catch coming on a play where the defender was bear hugging him before, during and after the throw. He accounted for 73 yards on a night where even Greg Ward had next to nothing going.

Below is the image as the ball is being thrown to Goedert on his lone incompletion of the night. 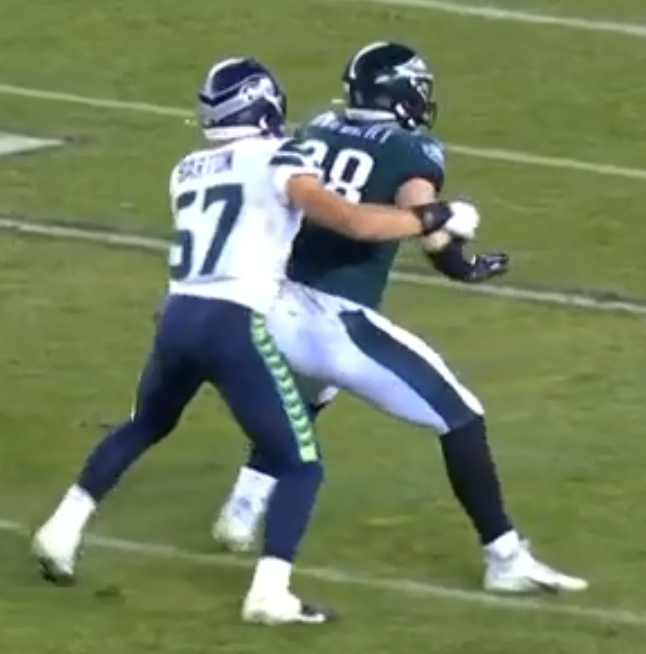 Burnett came up huge in his first game with the Eagles last week and with his former teammate Josh McCown, who vouched for him and got him to the Eagles in the first place, being elevated to QB1 early in the game, you would think he would get a lot of looks. If there was a time to shine, it would be with a quarterback you know, who brought you to the team and is perhaps more familiar with throwing to you than any other player. Instead he got just one target for a five yard gain. Perhaps even worse is that he was WR2 with those five yards with no other receivers outside Ward making a catch.

Gibson played two offensive snaps all night and was probably only brought in to be a gunner, but he drew a 39-yard pass interference call on one of those two snaps. The most difficult part of the play is that with Carson Wentz, there's a decent chance this is a touchdown. Gibson had a one and a half, maybe two step lead on the defender and the only reason PI is called is because the ball is way under-thrown, causing Gibson to all but stop and run backwards and the defender, trying to catch up, to run into him. If this ball is placed on Gibson, there's a good chance it's a touchdown. Gibson had to go back and catch the ball at the 13-yard line. Without slowing down or breaking stride, the Eagles likely have a tie game, making the absolutely massive assumption Gibson doesn't drop the ball, of course. Is it enough that Gibson is in training camp next year? Maybe. Does he have a roster spot? Far from it.

Pryor did ok, but he didn't play anywhere to the level that he did last week coming off the bench. You'd think with a week to prepare he'd be better than coming off the bench, but that wasn't the case and Big V wasn't able to make-up for Pryor's miscues all night. He wasn't necessarily bad, but he wasn't good, either.

Jenkins was all over the place with nine tackles, three quarterback hits and a sack in this contest. He and Fletcher Cox were the leaders in this game that they are expected to be. Jenkins didn't have a great season, but turned it on at the end of the year. He said he would not return on his current deal for the final year. It's a questionable decision what to do with him since he wasn't great most of the season and is an aging player who's availability has been his best asset on a team plagued with injuries for three seasons in a row now.

James didn't play corner, but got his name called for a stupid penalty for hitting the return man after a fair catch. The penalty should have been turned into an easy three points had Vinny Curry not been there.

Speaking of which, while Curry didn't register any tackles with the runs typically going to the opposite side or up the middle, he did make a highlight reel play with a blocked kick on the Seahawks second drive of the game to keep the game tied.

And I’m not trying to be a dick. Football analysis is for everyone, but when it comes to seeing a play and knowing how difficult it is to execute that action - leave it to guys who actually would know.

Or maybe he's just a piece of garbage who can't take the heat of his own actions. pic.twitter.com/cDIvqLeFbN

The Eagles will look to building their 2020 team and begin re-signing players and making coaching changes before free agency opens and the draft. Hopefully, they make some (or maybe all) changes to the training staff that has allowed this level of injury to occur.