Eagles Flyers Phillies Sixers About Us Write For Us
Previous month:
January 2020
Next month:
March 2020

Jesper Fast raced up the left wing and appeared to have a step on Phil Myers. Myers raced back, caught the speedy winger and executed a perfectly timed poke check to thwart another scoring chance for the Rangers.

In the middle of a game where the scoreboard showed 4-1 and 5-1 for most of the third period, it is a play that will quickly be forgotten, but it is those little plays that have the Flyers where they are.

Where they are, after a 5-2 win over the Rangers on Friday night, is in second place in the Metropolitan Division and on a five-game winning streak, continuing their run as one of hockey’s hottest teams.

The last time the Flyers went to the playoffs, it took a win over the Rangers on the season's final day to lock in their spot. Flyers captain Claude Giroux proceeded to cap off a career year with a hat trick in a win.

Friday's game doesn't lock the Flyers into anything just yet, but it was another statement that this team continues to put together solid games within the division and draws closer to solidifying their spot. Giroux was a big player in that result again, scoring twice in the Flyers 5-2 win over the Rangers.

Phillies OF McCutchen to Miss Start of Season 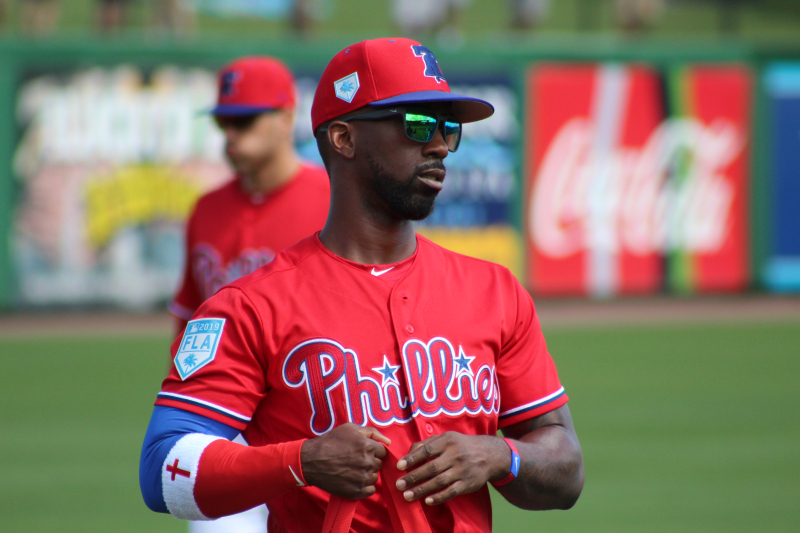 The Phillies had yet to make injury news thus far into the 2020 season.  However, that streak broke on Friday, when the Phillies learned that one of their star players would not be ready to begin the new season.   Outfielder Andrew McCutchen, who tore his ACL last season, will not be ready to start the season.

After Friday's 6-5 win against the Atlanta Braves, Phillies manager Joe Girardi told reporters including Matt Breen of the Philadelphia Inquirer that McCutchen will return to the Phillies "sometime in April.

Continue reading "Phillies OF McCutchen to Miss Start of Season" »

Injuries are something that a team wants to have to deal with. Let alone to the magnitude that the Sixers have, four of the five starters have had their issues with the injury bug this season. Although injuries can be rough, it can still be turned into a positive.

When a player goes down with an injury it opens an opportunity for another player to step up and show what they can do. This can be huge for young players who are trying to earn spots in their team’s rotation.

We have seen this in a decent sample for the Sixers this season. One player, in particular, is Shake Milton, who continues to raise eyebrows for the Sixers with every opportunity he gets.

Milton was on the Sixers last year on a two-way contract that limited his time to spend with the team. But this summer he was given a multi-year deal to be with the team full time. Milton has been in and out of the rotation throughout this season, but that might change soon.

He has kept himself ready at all times for whenever his number is called and it has paid off greatly for him. Every time he has been allowed to show what he can do for this team, he has made the most of it.

Milton has also stepped up when needed. One night, in particular, was earlier in the season where he would start in place of an injured Josh Richardson. He would go on to post a career-high 27 points in the game, scoring in a multitude of ways.

Shake has started in multiple games this season and left his impact. When given the chance to run in the starting lineup, his numbers see a nice boost.

Milton is shows more promise with every opportunity he gets. Great sign for the Sixers moving forward.

His development has taken a big step in the right direction, which is a good sign for the team moving forward. With a lot of money invested into the starting lineup, the team needs players who can produce on cheaper deals. Milton is on a very team-friendly deal and is locked up until after the 2022-2023 season.

At this point, it is safe to say that Milton has earned his spot in the rotation and should be here to stay. He fills a lot of holes that this team needs going forward. He is a scoring option off the bench, can handle the basketball, and knock down shots from deep at a nice clip.

Losing Ben Simmons for an extended period is something nobody wanted to see happen. But it opens minutes for a guy like Shake to continue to develop and show the positive asset he can be for the team in the coming years.

A few weeks ago, it felt like this weekend home-and-home series would have more potential to be a trap for the Flyers than a big game with a lot of playoff implications. But the New York Rangers have emerged as the hottest team in hockey at the moment, rolling off wins in nine of their last 10 games, including five straight following Thursday's comeback win over the Canadiens.

This recent surge has the Rangers just two points out of a playoff spot, while the Flyers, on a four-game winning streak of their own, look to maintain their place in third in the Metro with their sights now firmly set on taking another step and trying to catch the teams at the top.

It all starts on Friday night, when the Flyers play host in the weekend opener. Game time is 7 p.m.

After making his Flyers debut, Nate Thompson stood with the media gathered around him. The word playoffs was mentioned. The 35-year-old veteran center grinned from ear to ear at the mention.

“It’s exciting for me,” Thompson said. “Especially at my age, playing some meaningful games and knowing we’re making a push, it’s a lot of fun for me.”

For players like Thompson and Derek Grant, who were literally dropped into a playoff race at the trade deadline, there should be some added motivation. They both had a front row seat as their next team continued to make that playoff push. The Flyers started the final 20 games of the regular season by extending their winning streak to four games in a 4-2 win over the San Jose Sharks.

The Flyers used Monday's trade deadline to add two new faces to the roster. But their biggest acquisition on the ice remains the second-line center who is rapidly approaching setting a career mark in goals.

Kevin Hayes scored two goals and had a three-point game as the Flyers extended their winning streak to four games with a 4-2 win over the San Jose Sharks on Tuesday night at Wells Fargo Center.

It seems like yesterday when Philadelphia Eagles fans were praising Alshon Jeffery for his efforts during the Eagles first-ever Super Bowl. Well, maybe not. Alson Jeffery's name has been constantly brought up in locker room drama over the last couple of seasons. Alshon Jeffery has been rumored to not like Carson Wentz. ESPN's Josina Anderson cited an anonymous source that felt the offense was too complicated for Carson Wentz back in October when the team was struggling at 3-3.

The Athletic is reporting that the Eagles are shopping Jeffery in hopes of trading him by the new league year in March. Today, we will take a look at which teams make the most sense as destinations for Alshon Jeffery.

The Jets make a lot of sense as a potential trade partner. For one, as reported by Connor Hughes of The Athletic, the Jets are preparing for Robby Anderson to walk in free agency. The Jets will not want to enter the 2020-21 season without a legitimate receiving threat for Sam Darnold. Another factor to consider is that head coach Adam Gase coached Jeffery during his time in Chicago. The last big reason why New York makes sense is that the Jets have the 11th most cap space entering the offseason.

Now, if and that's a big "if", Tom Brady returns; the New England Patriots will need to surround Brady with as many weapons as possible. Also, New England could pull off this trade to entice Brady to return and give the Patriots another shot. Fit is something that should be taken into account as well. There is no denying that throwing Alshon into a receiving corps of Edelman and Sanu would be dangerous.

Both Frank Reich and Mike Groh have worked with Alshon Jeffery. Reich obviously during the Eagles Super Bowl run. Groh worked with Jeffery in Philly, but also in Chicago. Groh was Alshon's wide receivers coach in Chicago; which was during his pro bowl seasons. Factor those things into the Colts having a ton of cap space, as well as simply needing another wide receiving threat on the roster.

Monday's trade deadline brought two new faces to Philadelphia and both will be in the lineup as the Flyers continue their playoff push.

Derek Grant and Nate Thompson make their Flyers debut as the team goes for a fourth straight win against the San Jose Sharks.

The Philadelphia Eagles are set to interview wide receiver KJ Hamler tomorrow. The Penn State wide receiver is projected to be late first or early second-round pick. With the Eagles having pick #21, they are in a good spot to draft him if they think he’s the guy. They might even be able to wait until the second round to get him. Hamler brings speed and explosiveness, something the Eagles desperately need. We won’t know Hamler’s official 40 time until Thursday. If he shows elite speed, he will move up on everybody’s draft boards. Hamler told the media today that he models his game after current Eagles wider receiver DeSean Jackson. Jackson, one of the best deep threats of all time would be a great mentor for Hamler if he was drafted by the Eagles.

Hamler did get official measurements on Monday. Hamler was measured at 5-foot-8 and 178 pounds and had a 9 and 3/8 inch hand size and 6-foot 1/2 wingspan. His hand size actually was very similar to taller receivers such as Justin Jefferson from LSU and Tee Higgins from Clemson. Hamler’s draft stock after the combine will all come down to his 40 time.

Miles Sanders and KJ Hamler are actually best friends. Hamler told the media today that they used to room together at Penn State. During his rookie year, Sanders called Hamler every week and they have talked about the possibility of playing together with the Eagles. “We always talk about it, that would be a fun adventure.” It would be really cool to see Hamler and Sanders play on the Eagles together and develop with franchise quarterback Carson Wentz.

Penn State WR K.J. Hamler models his game after DeSean, is best friends with Miles Sanders, talks with Sanders about becoming an Eagle, and is set to meet with Philadelphia tomorrow. 👀 #NFLCombine pic.twitter.com/Mf86DaPRVZ