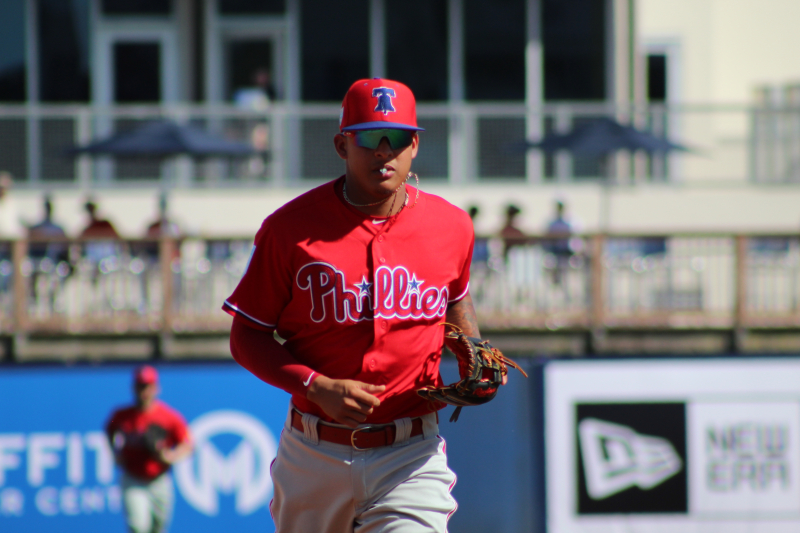 We are back with another edition of the 97.3 ESPN Phillies mailbag. Each week we take your questions and talk about them on the Sports Bash with Mike Gill every Tuesday during the Phillies season. Send your questions anytime on Twitter to @FrankKlose or send a text to the text board at 609-403-0973.

This is a difficult one.  For a while, it seemed like the Phillies made the better choice by drafting Mickey Moniak first overall in the 2016 amateur draft.  A.J. Puk had "Tommy John" surgery in 2018, less than two years after being drafted.  But Puk is a rising star in the Athletics system, and can make a real impact in the 2020 starting rotation for the Athletics.

The question, ultimately might depend on how Puk does in terms of injury going forward.  If healthy, he might be a dominant left-handed arm in this game.  It will be easy for Phillies fans to wish the Phillies took him if that's the case.

The question might also depend not solely on how well Moniak does, but also how Kevin Gowdy does.  The Phillies agreed to a deal with Moniak ahead of the draft that would allow them to spend extra on round two.  MLB teams are only allotted so much money.

Moniak, meanwhile, probably starts at Triple-A in center field and remains ready in case of an injury.  But, he will have to do better than Kyle Garlick and Nick Martini, who are both outfield options to head to Philadelphia in case of injury.

Will this be another Jeff Jackson drafted ahead of Frank Thomas? I don't know about that, but the Phillies do not have a big name to show from the draft other than Aaron Nola in many years.  Time will have to answer this one.

Any way Alec Bohm breaks camp with team if he shows up strong in Spring Training?
~Harrison

I think that the overall goal for Alec Bohm this Spring is to spend some time around the big club, get some at bats, get some more experience with the glove, and then get some at bats at Triple-A before hopefully rising to the major leagues at some point in 2020.  I think a lot would have to go wrong in Phillies camp for Bohm to make the big club.  That's not to say that he does not have a chance at all, but it is very unlikely.

One reason is that the Phillies have plenty of options to temporarily fill out an infield spot should the team need one out of the gate.  Veterans Logan Forsythe, Josh Harrison, Neil Walker and Phil Gosselin all can man third base if necessary.  The Phillies probably would prefer to hang onto as many of those players as possible, since they are in camp on minor league deals.  Should a spot open with an injury to any of the Phillies infield, I think they would prefer to keep one of them around.

Meanwhile, yes, the service time question is a real issue.  I think this is dissimilar to the Scott Kingery situation a couple of years ago, when it seemed like he was already vetted at Triple-A.  Bohm has not had the opportunity to face Triple-A pitching just yet.  It usually follows that a player would get some at bats there first, particularly since Bohm rose through three different levels last year alone, not hitting Triple-A.

Should Bohm rise in May or later, the Phillies will have six years of control beyond 2020.

So I think Bohm starts at Triple-A no matter what, and whenever his bat shows it is ready, the Phillies will have to add him.

Is Nick Pivetta going to break out?
~John

However, I think there remains some potential for Pivetta in the bullpen.

Pivetta has been working on a new change up pitch.  I think if Pivetta makes the transition to the bullpen, throwing his high-90s fastballs paired with a good change up could be devastating against hitters who are seeing him in the late innings out of the bullpen.   And the Phillies are almost expected to put at least one of Pivetta or Vince Velasquez in the bullpen in 2020.

Ultimately if all goes well, Spencer Howard will be ready to contribute at some point.  But that assumes the other four (Nola, Zach Wheeler, Jake Arrieta, and Zach Eflin) are healthy and firing on all cylinders.   All in all, I think the Phillies might regret not adding a veteran depth arm beyond Wheeler.