“New” Phanatic Should Be Enough to Ward Off Lawsuit 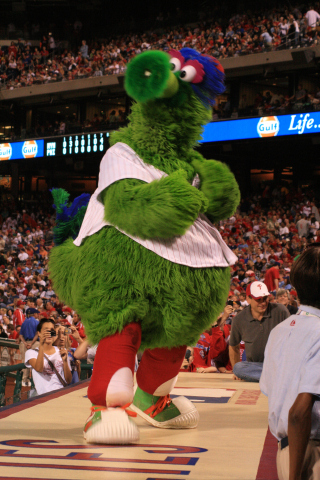 Word broke late last week that the beloved mascot, the Phillie Phanatic, was about to undergo a change.  While the Philadelphia Phillies and the original creator of the Phanatic, Harrison/Erickson, the company who created the Phanatic back in 1978, are embroiled in a legal battle regarding the mascot, the club has unveiled a “new” mascot.  That mascot will debut at Spectrum Field in Clearwater today.  Fans can relax: it has the feel of the old Phanatic.

NBC Sports Philadelphia unveiled images of the mascot on Sunday, which were taken back in Philadelphia:

The differences may be enough to make a difference.

The changes could be enough for the Phillies to win a lawsuit.

The company who is seeking payment fro the original design, Harrison/Erickson, also sold “different” mascots that were eerily similar.   Consider “Slyly” of the Hiroshima Carp:

What is different than the Phanatic?

The following are already proprietary to the Phillies:

Therefore, if Harrison/Erickson can sell a “different” mascot by changing the same things the Phillies changed today, maybe they have a chance to win.  Then again, I’m not a lawyer, nor do I play one on television.

But this will play out between now and June.  But my hunch is, at Spectrum Field today, the mascot will feel like the old Phanatic.