The Phillies have a crowded field of candidates for bullpen spots in 2020.  With many potential bullpen options in camp on minor league deals, the Phillies turned to a familiar face in Tommy Hunter.  Hunter is reportedly returning to the Phillies on a major league deal.

No announcement from #Phillies, but Tommy Hunter passed his physical. He is on the field for today’s workout. Major league deal. David Robertson will be placed on 60-day IL.


Robertson is expected to miss most of the year recovering from Tommy John surgery.

Hunter signed a two-year, $18 million deal with the Phillies prior to the 2018 season.  It took Hunter a while to hit his stride in the first season before settling in nicely to the Phillies bullpen.  In 2019, injury limited Hunter to just five games.  In either season, Hunter was unable to match his very effective 2017 with the Tampa Bay Rays.

But historically Hunter has been able to get left-handed and right-handed batters out, an attribute that could be helpful in 2020.  The rules will now call for a reliever entering the game to pitch to three batters.  That makes someone like Hunter more valuable, while de-valuing the "LOOGY", a left-handed pitcher who enters to get "one guy" out. 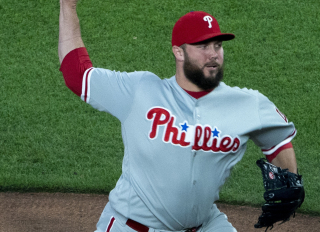