With the NFL finally announcing the compensatory picks in the 2020 Draft and the full slate of picks available to the Eagles now official, we looked to our experts to complete some mock drafts as the Eagles.

In order to keep uniformity, this was completed using The Draft Network’s Mock Draft Machine.

Similarly, trades up or down were not considered in this exercise so that all participants would be selecting at the same places in the draft.

Without further ado, here are the first round of Eagles-only mock drafts from our Sports Talk Philly staff. 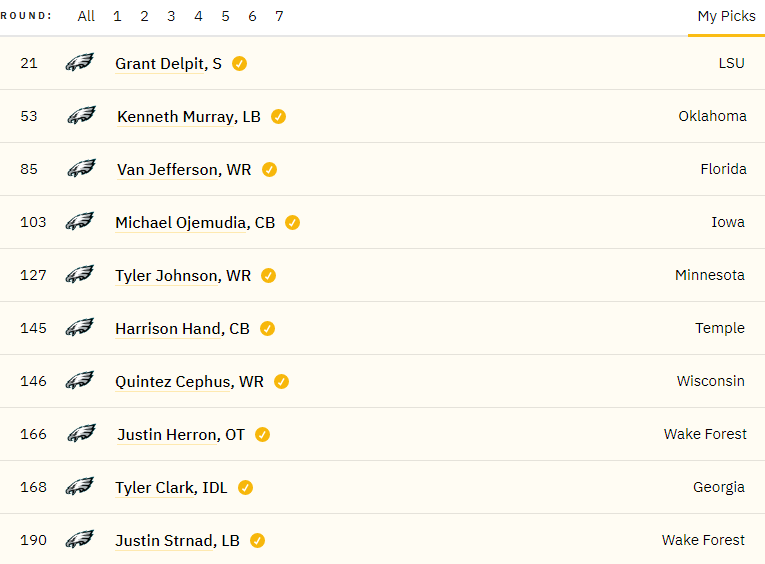 With the top three receivers and corners already off the board, Delpit becomes a fairly easy selection as a compliment to Malcolm Jenkins. Murray, who was a consideration at 21, somehow dropped to 53 and was an absolute steal that I would honestly not expect to happen at the draft. The pair would give the Eagles two low-cost, impact defenders each at a different position of need.

Jefferson and Ojemudia are the top prospects available at their positions in the third round and the Eagles need to pick the receiver first with a deep class and money already being set to go towards a top-tier corner. Jefferson should be a solid contributor at a minimum while Ojemudia is a bit more of a project.

Tyler Johnson is perhaps my favorite prospect in the draft and I would absolutely consider taking him in earlier rounds. I believe he could be the next Mike Thomas/Chris Godwin type of steal in the draft.

Hand and Cephus provide further promising prospects for positions of need. Hand could serve as a corner or a safety (perhaps dependent on what the Eagles do with Avonte Maddox) and Cephus is an under-the-radar burner that could develop well behind Jackson.

Herron is a college tackle that the Eagles could hope to turn into the next Big V or Seumalo in an effort to replenish some of their offensive line depth while Clark provides a developmental option for a team whose third defensive tackle is currently a 2019 undrafted free agent signed off the practice squad.

Strnad adds a high-ceiling linebacker with great quickness to a corps that figures to lose two of it’s starters and whose top veteran option is likely to be Nate Gerry. 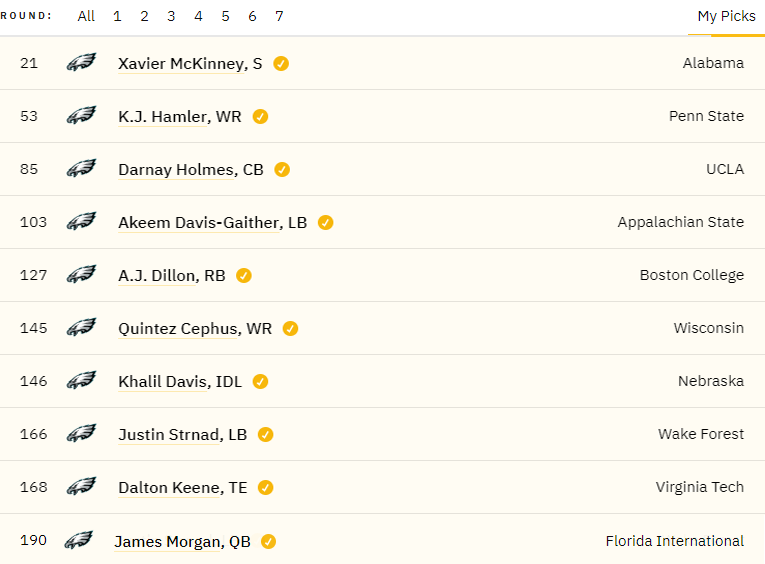 Howie Roseman has a big 2020 draft and free agency upcoming to keep the championship window open. One of the best ways to keep that window open is nailing the draft out of the park as the team needs, emphasize NEEDS, to get younger and prepare for life without some of our aging veterans.

With most WRs left being a reach at 21 and almost no plan for the S position for 2020 and beyond, this is the best outcome for Howie. McKinney is literally younger Malcolm with his versatility, size, speed and athleticism. Extend Malcolm and let McKinney learn from the best.

KJ Hamler at 53 seems the smart choice, he fills a current void that we have, slot receiver plus the ability to be a vertical threat and big play waiting to happen. Closely compared to the one and only DeSean Jackson.

I think the whole Eagles fan base would riot at this point, with all the rumours swirling, if Howie doesn’t address CB1 in free agency. However, with the idea of potentially moving Douglas to safety, it doesn’t hurt to use the draft to re-stock the cornerback position. Darnay Holmes is slightly undersized for an outside corner, but is aggressive with solid ball skills. Give him a shot and worst case move him inside to nickel by year two.

Akeem Davis-Gaither is a great reactive athlete who does his best work in open space and fits the Jim Schwartz scheme, also landing at just about the right spot that Howie will likely consider drafting a LB.

AJ Dillon is literally a bus; he has a rare combination of size and athleticism that would help Eagles fans forget about Jordan Howard. He is a massive clap of thunder to Sanders’ lightening. Howie then doubles down on receivers. Hamler covers slot and deep vertical threat, while Quintez Cephus, I believe the most underrated WR in the class, can play and win at X, Z or slot with plus route running ability.

A double down on offense leads to a double down on defense. Howie loves IDL and there is limited support behind Cox and Jackson. Enter Khalil Davis. He’s smaller then most IDL, but is quick which can help create havoc and draw opposing OLs in support of Cox or Jackson with his effort. While I have a double down at LB, Howie may not love this, but Strnad will be a mid to late selection and could fit as a WILL in the 4-3 Schwartz scheme.

With the final two of ten picks, I go back to offense to positions not of need, but in need of depth. Behind Ertz and Goedert, there is practice squad TE Alex Ellis. Rostering a third TE sounds weird, but what if he can play in-line, slot, fullback and pass protect? Dalton Keene does it all and could be creatively used by Pederson to help Wentz out. Finally, the hunt for a cheap back-up for Wentz continues with a very intriguing prospect in James Morgan. He is a developmental project and lacks mobility, but has a cannon of an arm and doesn’t take many sacks.