Eagles Flyers Phillies Sixers About Us Write For Us
Flyers Name Eric Lindros an Official Team Ambassador
Eagles Make Trades, Acquire Goodwin and Speed Among Flurry of Moves on Day Three of Draft

Eagles Shock and Confuse on Day Two of Draft

The Eagles took receiver Jalen Reagor out of TCU with their first-round pick on Thursday and were set to begin day two of the draft on Friday night.

The team had plenty of impact players available in the second-round after talent that had been available at the start of the round slid right into their laps.

An absolute glut of players that could impact the Eagles roster.

So who do they choose? 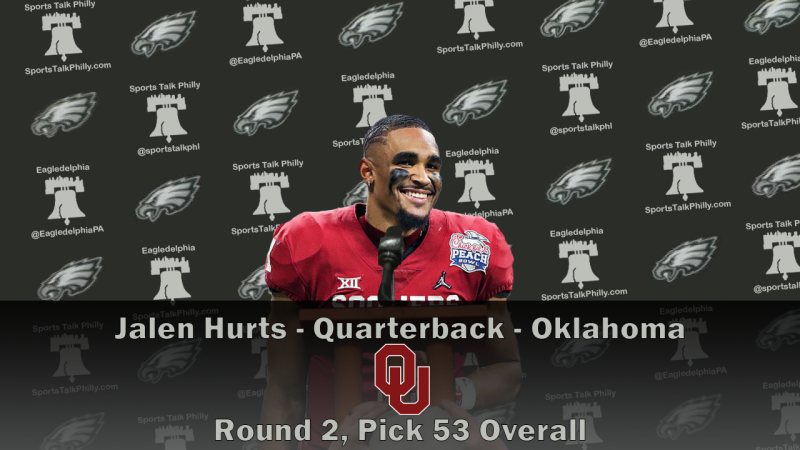 In four seasons in college (three at Alabama and one at Oklahoma), Hurts totaled 9,477 yards and 80 touchdowns.

He was the 2016 SEC Offensive Player of the Year and was the runner-up for Heisman in 2019.

It's a move that might have made sense had the Eagles not had tons of talent to choose from and holes to fill.

Instead, a team that needed to add depth and build for the future used their second-round pick on a guy who will play a snap or two every now and then. Instead, they chose a back-up for Carson Wentz. It was a move that, instead of giving them a starter in round two, left the Eagles with a wait of 50 picks between it and their next pick.

It was a move that turned the entire fanbase on the front office and leaves no real way of defending the team's decision making, including their not wanting to give up a pick they could use on a back-up to trade up for CeeDee Lamb just one day earlier.

In a time where nothing is going on in the world of sports and no end to that in site, it was great of the Eagles to gift all of their fans anger and hopelessness as they waste valuable draft capital.

Early reports are that they intend to use Hurts like the Saints deploy Taysom Hill, a player with 709 yards over the past three seasons (99 total touches).

That's 236 yards per season when he can play as a receiver, something Hurts has never done.

All reports are that he is a good teammate, so that may be the second-round picks biggest contribution to the team in the positive scenario that Wentz remains healthy and doesn't have his head speared into the ground.

Hurts is a great guy, much like Nick Foles, but the draft capital given up to undermine the franchise QB and take a bench warmer over an actual impact player means that fans will hate the kid despite that. 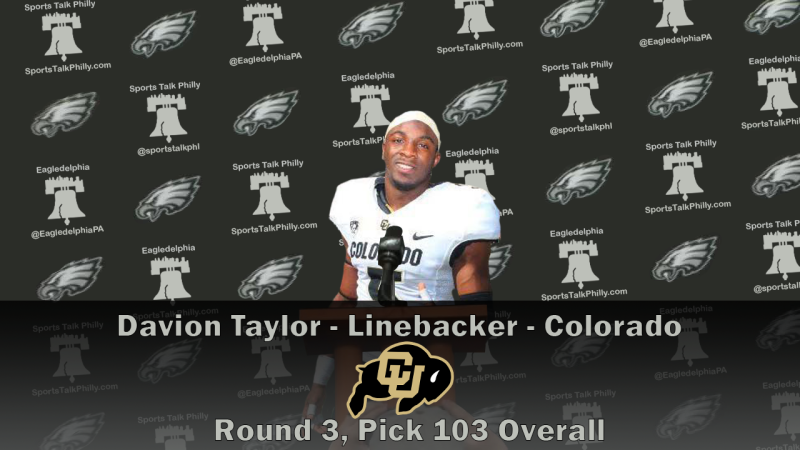 Unfortunately, the Eagles passed on other linebackers and end up with Taylor, who played part time football in high school and just 14 games in college.

His college stat totals are 129 tackles, two sacks, three fumble recoveries and six passes defensed. He also ran a 4.37 40 at his Pro Day.

The Eagles might not see any return on the pick because he has so little experience and his only standout trait is explosiveness. The team might be better off playing the guys they already had and keeping Taylor to special teams for a season or two before he can make a significant impact on defense.

It's an odd pick considering they used their second-round pick on a guy who won't contribute unless things go horribly wrong, too.

The Eagles have five picks in the next three rounds on Saturday.