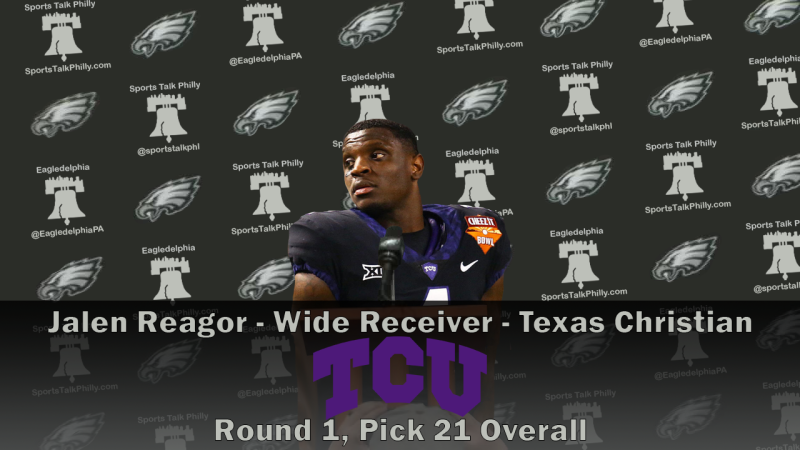 After weeks of next to no news on the sports front, the NFL began their 2020 draft.

The Eagles, for the first time since they drafted Carson Wentz, had more than seven picks heading into the event.

Much to the dismay of fans however, the top three receivers were off the board with the Cowboys taking CeeDee Lamb at pick 17 and the Birds chose not to trade away their future for one receiver.

Instead, the Eagles stayed put at 21 and took an explosive playmaker.

With the 21st pick, the Eagles selected Jalen Reagor out of TCU.

While some may have wanted Justin Jefferson, Reager was the best burner on the board after Henry Ruggs III.

In three seasons at TCU, Reagor accumulated 2,248 yards and 22 touchdowns. He also added 304 rushing yards and 602 return yards in his final two seasons at the university.

His numbers could have been better in 2019, but regressed due to poor quarterback play at Texas Christian. That should not be an issue for him in 2020.

Reagor should be an immediate starter as well be a back-up for DeSean Jackson. What may have pushed him up the Eagles draft board was his return ability, though.

The Eagles are in need of a playmaking returner since they lost Darren Sproles and have been searching for a someone since.

When Jackson is healthy, the Eagles should now have two deep threats to stretch the field and open up room for Zach Ertz, Dallas Goedert and Greg Ward in the short to mid field.

In open space, Reagor is dangerous and he plays a physical game, especially for someone of his size (5’11”). His size may be his biggest weakness, but he can also high-point a ball. It is a pick that speaks volumes of what the Eagles think of Carson Wentz’s ability to get the ball to someone that will likely be smaller than anyone covering him, especially deep down the field.

The Eagles have seven more picks in the 2020 Draft, including two that are scheduled for Friday night.