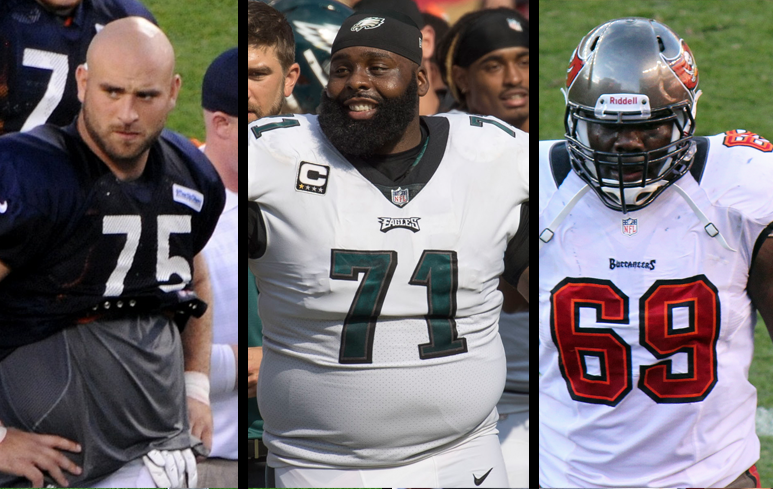 On Monday, the Eagles were dealt the bad news: Brandon Brooks tore his Achilles while training.

On Tuesday morning, Eagles head coach Doug Pederson said that he was heartbroken to hear the news.

He also said they would start looking for a replacement internally.

Brooks’ elite level of play is not likely to be replaced, but finding someone who can at least play at a high level between Lane Johnson and Jason Kelce is important to the success of Carson Wentz and Miles Sanders.

What players could be up to the task?

The heir apparent to the job is Matt Pryor, a sixth-round pick in the 2018 draft who took over for Brooks at the end of last season.

Pryor has an uphill battle from a fan perspective since there is very little chance he plays as the guard in the league like Brooks can. That doesn’t mean he isn’t a starting-caliber player.

Pryor has essentially only played two games worth of snaps in the NFL, so his experience is limited, but he allowed just one sack and four pressures as a starter in the playoffs for the 2019 season.

Using Pryor in the position comes with perks in that there is some stability from last season as well as familiarity and the chance to prove that the Eagles have again developed depth behind their starters for the 2021 season. The price it comes at is that the team would be left with only players who have never played in the NFL as their entire slate of backups.

Jack Driscoll joined the team in the fourth round of the draft earlier this offseason.

Though he was considered a steal by many and has excellent college tape, Driscoll was a tackle in college and the Eagles plan to move him inside would likely take some time.

Driscoll has the smarts and athleticism to play in the NFL, but throwing a rookie who has a “shortened” offseason to prepare and is being trained for a new position would be a pretty rough way to start an NFL career, though impressive if he pulls it off.

Just because of the uphill battles he faces, Driscoll might have the most difficult road to starting at right guard of the internal options.

Herbig saw most of his time at center and he was listed as third-string at the position.

How he’s grown from then is unclear, but the staff clearly sees something in him and likely have or were planning to cross train him at guard in addition to center.

Herbig did play both guard positions in college, moving from the left to the right later in his career at Stanford.

Sua Opeta was with the Eagles throughout the 2019 season, but unlike Herbig, he did not make the initial 53-man roster.

Opeta was a pretty major undrafted free agent signing last offseason, but it was well known that he would be a project as he featured the raw talent and strength, but lacked the technique and was coming out of Weber State, a FCS team in the Big Sky Conference.

His promotion to the active roster following the release of Mack Hollins in week 14 speaks volumes about how the Eagles coaching staff views Opeta and shows he has made improvements in those areas while on the practice squad. Has he advanced enough to be seriously considered for the right guard position?

The first external option to look at is, of course, Jason Peters.

Peters knows the offense and would fit into the locker room seamlessly, bringing veteran leadership. The question is at what cost and in what position.

Peters said last offseason he had considered playing guard and even offered to play right tackle for the team mid-season in 2019, but would the future Hall of Fame left tackle risk the move to a position he hasn’t played on the opposite side?

Andre Dillard was an absolute trainwreck at right tackle last season, so bringing in Peters as a left tackle wouldn’t solve this issue in the slightest.

I wrote earlier this offseason that Peters was still a valuable asset to teams but, as with all additions, carries some risks. One of the biggest risks was Peters taking a roster spot from one of the younger guys, an issue that no longer exists. The key now is how much money would Peters want and how will it impact the team’s future issues in regards to the salary cap and a potentially lowered cap in 2021.

Written off many lists because of his “retirement” this offseason, Kyle Long remains a free agent after saying that the Bears fired him and that he would be open to a return elsewhere.

He may still retire, but he is considering a return.

Long carries a pretty heavy injury risk, but he can also be one of the most dominant guards in the league. Additionally, he could bring some additional depth as he has also played tackle at a high level in the NFL.

Philadelphia might be a good fit for Long because his brother, Chris Long, played for the team and was a key component to the team securing their first Super Bowl Championship in 2017.

That makes it so Kyle Long is familiar with the city, the team and the players, so much so that Long posted about feeling sorry for Brooks shortly after his injury was announced.

Thinking of my guy @bbrooks_79 one of the best in the game. Rest up get right and do your thing 🙏🏼 https://t.co/BMxRhE4DAM

Could Long play a significant role for the Birds just as his brother did?

Perhaps the most discussed option other than Jason Peters is Larry Worford.

Worford is in the top half of guards in the league and the only reason that he remains available is that the Saints cut him to save money so late that there was no major market for him as teams had already addressed their needs.

While that move is an awful one to make for the player so late (the opposite of what the Eagles have done for Nigel Bradham and others), may pay off for the Birds.

Worford could keep the dropoff from being too much and might even be able to play close to the level of Brooks with Lane Johnson and Jason Kelce on each side of him.

The biggest question with Worford is how much would it cost to get him to sign a contract, since the Eagles need to roll over all the cap space they can get.

Demar Dotson is the most unlikely option on this list, but he is the most talented offensive linemen available on the free agent market outside the three players listed above.

Dotson is an aging veteran who has played primarily at the tackle position and could see a bit of an improvement in play by moving inside as many other tackles have done before him.

He has talent, but playing a new position on an unfamiliar team in the current conditions is not ideal, so the Eagles would likely have to be very worried about their internal options and strike out with players like Peters and Worford to even begin to seriously consider adding the services of Dotson.