Eagles Flyers Phillies Sixers About Us Write For Us
Powder Blue Podcast #17: Baseball is Back!
Report: Realmuto Deal "Could Come Quickly"

While the Philadelphia Phillies faithful watch in horror as the summer days dwindle into July for the MLB, the pandemic-abbreviated season itself could spark fears for 2021 and beyond. Yes, the slippery slope of rule changes to accommodate economic and health concerns offers differences in the game you love.

The closure of the Phillies Clearwater facility was the proverbial tap on the shoulder for their front office and the entire MLB. In fact, this remember-me flare-up is impacting the locations and competitional elements for 2020’s contests, but whom will the rule changes also affect? The fans!

“Desperation is the raw material of drastic change. Only those who can leave behind everything they have ever believed in can hope to escape.” - William S. Burroughs

If baseball has the wrong changes for purists, they will rail against it relentlessly and never forget the offending rules ruining the national pastime. But improvements or potential ruinations have been part of the sport from the beginning. And when you think about it, most fans have experienced changes even since 2010.

To illustrate, hitting one back through the box was when there was a chalk box drawn on flat ground.for the hurler. With the introduction of the mound, though, the home team raised or lowered it depending on the starter, but eventually baseball established a uniform height.

According to Chris Landers of Cut4, batsmen could tell the moundsman they wanted a low or high strike zone before every pitch. Low was from the knee to the belt, and high was from the belt to the shoulder. So, the Phillies followed this rule from 1883 through 1887 and its discontinuation.

In my lifetime, 16 franchises have expanded to 30 organizations, and the postseason has grown from a possible seven games to a maximum 20 contests. Ergo, a club needed only four victories, but 12 triumphs is now the winning total for a wild-card team.

For 2020 and maybe 2021, COVID-19 and government leaders will influence the MLB’s locations and seasonal length. Plus outbreaks, quarantines, and other restrictions will probably be mere detours for the lords of baseball.

Initially, roster construction involved the three-batter rule and a maximum of 13 hurlers on an active 26. But the pandemic will affect Phillies general manager Matt Klentak and his MLB contemporaries more when or if training camp begins again on July 1 at home parks.

Well, the sticklers will be none too happy with the DH (designated hitter) in the National League, and they will be extremely vocal if the DH is in place for ‘21 as well. Imagine their threats of no longer watching baseball because they blame commissioner Rob Manfred for the NL’s DH.

What would push purists over the edge? Perhaps, the extra-innings rule for ‘20 is a real possibility because the 10th frame will start with a man on second base. He will be the last batter who made an out, and the ruling will be an error and an unearned run on the reliever’s line if he scores.

If a knotted-up contest completes 12 innings, a tie game could be the outcome. Yes, Richie Ashburn and every deceased member in the Hall of Fame would be turning over in their graves. Oh, the horror!

It could be worse than suspended games for rainouts instead of makeup doubleheaders being seven-frame contests. So, a squad with a solid rotation and a top-tier closer won’t really have the advantage over their weaker-armed opponents. But day-night doubleheaders are still a possibility for complete washouts.

Fortunately, sticklers won’t be able to grumble because the six divisions will still be the same, and the playoffs will as well. In fact, the Fightins will play their divisional rivals for 10 games apiece (40 total) and the American League East for four contests each (20 total).

Will the Phillies play from Canada to Florida, or will the virus force the MLB to form a bubble-type configuration in southern California? Well, Florida and Arizona may have problems due to the present COVID-19 situation for three organizations and the Toronto Blue Jays if they can’t play there or their Florida camp.

A bubbled-location MLB would need five sites to host three games per day or 15 contests involving 30 clubs. Basically, Los Angeles has three stadiums, and San Diego has two facilities: a doable backup plan! Moreover, they could be neutral sites if the coronavirus is problematic in Arizona, Florida and/or Toronto.

Other possibilities involve two-team cities like New York, Chicago and Los Angeles. Translation: It may be safer in Queens than the Bronx, in Chicago’s south side than their north side, or in San Francisco than Oakland. Ergo, they can switch arrangements on the fly.

Since only change is 100 percent, I’m not a purist and don’t believe in being upset over something I can’t control. But those who believe the opposite will have a difficult time deciding between a 2020 with multiple first-time rules or no baseball. Pick one! 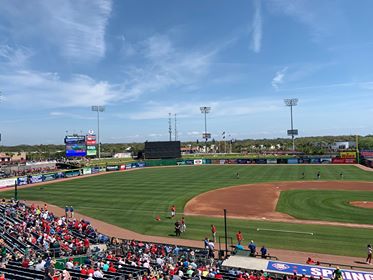