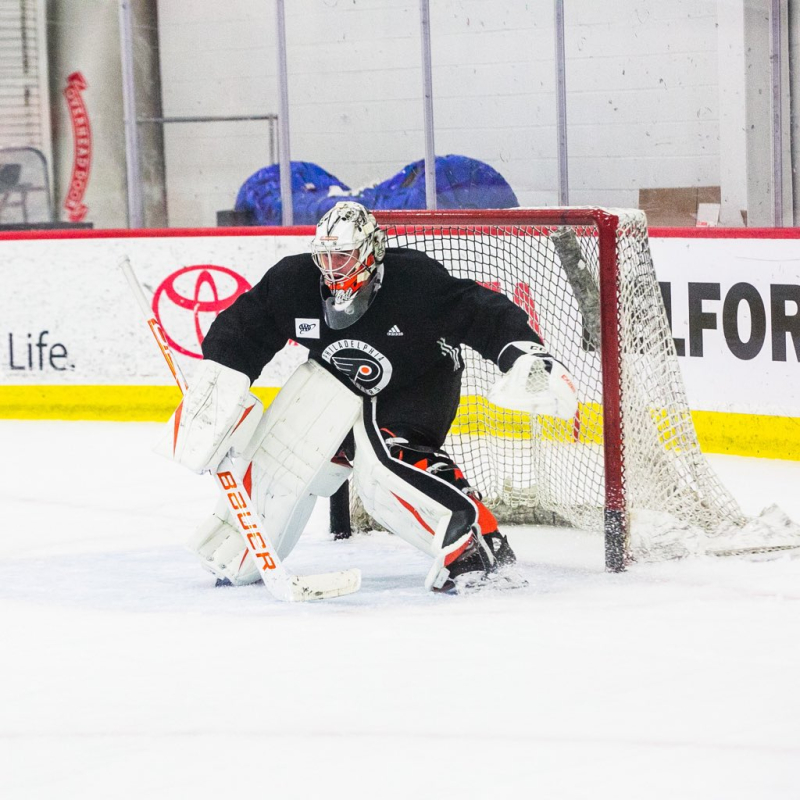 For the last two weeks, the Flyers have joined 23 other teams around the league in ramping up activity in preparation for travel to the hub cities to start Phase 4 and the qualifying round and Round Robin play that will ultimately set up the first round of the playoffs. The time has come to hit the road.

Saturday was the Flyers final day in Voorhees before making the trip to Toronto to finish out Phase 3 and move to Phase 4. In just three days, the Flyers have an exhibition game with Pittsburgh. One week from their departure to Toronto, they will start the Round Robin portion of the schedule against Boston.

On the final day of practice in Voorhees, the Flyers had the full roster on the ice. Sean Couturier returned after the birth of his daughter and Carter Hart was back with the full team for practice after skating by himself after Thursday’s scrimmage.

“I feel good. Just kind of taking things a little more precautionary the last couple days,” Hart said. “Been ramping it up the last two days. I feel really good right now. The plan is to be good to go for Tuesday.”

Hart did not disclose the injury, but repeated that the reason for his absence was more precautionary than anything.

With this postseason, Hart gets to step into a big stage at the NHL level. Alain Vigneault has placed his confidence in Hart, while also noting that Brian Elliott is going to get his share of opportunities leading up to the start of the first round of the playoffs. For Hart, it’s going to be a new experience, but one that is shared by the rest of his teammates.

“Going into this postseason, it’s like no other. Its uncharted waters for everybody,” Hart said. “It’s going to be a new situation. It’s not your normal typical playoffs. Me and Moose had a good chat there on the bench that one scrimmage and we were just taking a break between periods. He said to me, ‘This is what it’s going to be like for your first playoff game.’ That’s pretty crazy.

“Playoff games he said are mostly about atmosphere and all that so it’s going to be different for everybody. I think as athletes, as professionals, that’s our job to adapt and overcome whatever’s thrown our way. AV’s been great all year for all of us. He’s a very trustworthy coach. He’s very honest. He can be very strict as well but as a coach you want someone who’s honest and holds you accountable.”

Assistant coach Michel Therrien said that the plan for Tuesday’s exhibition in net is not yet decided. It could involve both Hart and Elliott getting some time in goal.

Even with a couple of days away from main practice, Hart has earned the trust of his teammates from his performances all season.

“He definitely looked real good out there today. We obviously as a team believe in him,” Joel Farabee said. “I know our coaches believe in him. Fans believe in him. He’s such a great goalie so he and Moose are going to be huge down the stretch for us. They’re a big reason why we won a lot of hockey games this year. Hartsy is one of the young guys but he’s definitely a leader in a way too. We rely on him a lot.”

“He gets it. He’ll be ready. He’s dialed in on his game,” Justin Braun said. “He’s got one job back there, stop the puck. When he’s dialed in, he’s one of the best in the league. It’s been fun playing in front of him. When you need that big save, you saw that lateral movement on a couple plays this year coming across and making that save. You need that every once in a while especially in the playoffs.”

The Flyers final travel roster is expected to be revealed later on Saturday.