Should The Phillies Trade J.T. Realmuto…And Re-Sign Him?

Throughout the off-season and now into the summer version of Spring Training, Phillies fans have been vocal about wanting the front office to re-sign catcher J.T. Realmuto.

The Phils swung a trade for the star catcher last off-season in a deal that included one of their most prized prospects, pitcher Sixto Sanchez. In his first season in red pinstripes, Realmuto had the best season of any catcher in all of baseball.

He shined not only in the batter’s box, but behind the dish as well. In 145 games, Realmuto ranked third among qualified catchers in batting average (.275), second in home runs (25), and led all catchers in RBI’s (83), doubles (36), hits (148), and slugging percentage (.493). He did all of this while throwing out 43 runners attempting to steal, which led the league.

The guy who came in second? Yasmani Grandal, who threw out 27 base runners. Realmuto threw out his 27th base runner on July 26th. Really makes you wonder why players kept trying to run on him.

Reportedly, Realmuto is seeking a contract in the $25 million/year range over about five years. According to Jim Salisbury of NBC Sports Philadelphia, the Phillies are prepared to offer J.T. $23 million over anywhere from 4-6 years.

But what if the Phillies didn’t re-sign him right now?

Stay with me here.

Let’s say the Phillies do what the Yankees did with Aroldis Chapman in 2016. The Yankees traded Chapman to the Cubs at the trade deadline, acquired a good set of prospects from Chicago that included Gleyber Torres, and re-signed the Cuban flame-thrower that off-season. It worked out for Chapman: he got a World Series ring with the Cubs and got the money he wanted from the Yankees.

The plan is simple in theory but incredibly challenging to execute. Is this idea bold? Absolutely. But, I like to say, “It’s so bold that it just might work.”

First and foremost, the Phillies can only rationalize pulling this off if they feel that they are out of the playoff race. Which, in a 60 game season and the trade deadline on the day of the Phillies 35th game, could be hard to try and justify. Although, this whole plan is built off of a what if, so let’s say for the sake of argument that the Phillies are completely out of it and Vince Velazquez and Nick Pivetta each have an ERA over 12 (which might be the most plausible scenario of anything I’ve written so far).

The second condition that would allow the Phillies to do this is if the front office is fully confident that Realmuto would still sign back with Philadelphia in the off-season. Is there any way to fully guarantee that without tampering? Probably not. But, Realmuto has been on record multiple times saying he would love to stay in Philadelphia.

The best bet for general manager Matt Klentak and managing partner John Middleton is to be clear about their intentions with Realmuto if this situation ever arises. They need to be up front about their willingness to bring him back after the season if they do trade him. They also need to sell J.T. on the idea that it is best for the team in the long-term to trade him for guys that could help the ball club in the future. It’s certainly not the worst idea in the world, and players value honesty above anything else from their front office.

Then, if that works, the next question is what team do the Phillies trade him to? It’d have to be a team that not only is in contention and has a need at catcher, but a team that has some solid prospects the Phillies could acquire.

Possible Destinations for J.T. & Returns for the Phillies

The team that is most attractive in this scenario is the Tampa Bay Rays. The Rays have one of, if not the outright best farm system in baseball. They have five guys on the top 100 prospect list, and while the Phils may not be able to get any of their top three, they could possibly make a run at middle infielder Xavier Edwards (no. 72 on MLB top 100 prospect list) or starting pitcher Shane Baz (no. 90).

Now, whether Tampa would be willing to part with any of their top prospects for half a season and possible postseason of Realmuto remains to be seen. If a trade were to go down in this scenario, I’d say it would look something like this: Rays acquire Realmuto (C); Phillies acquire Shane Baz (RHP, no. 5 in Rays system), Randy Arozarena (OF, no. 17, in Rays 60 man player pool), and maybe a player to be named later. Certainly an attractive deal for the Phils.

Another team that should certainly be interested is the Houston Astros. It would be much easier to get one of the Astros top prospects in a deal for Realmuto for two reasons. One, the Astros are a Realmuto type catcher away from winning a World Series title without an asterisks next to it. Second, the Astros have one of the worst farm systems in baseball, as they have just one player on the top 100 prospect list.

That being said, three of the Astros top five prospects at the moment are projected to make the Astros opening day roster. The Phils could try and acquire either Jose Urquidy (RHP, no. 2 Astros prospect) or Bryan Abreu (RHP, no. 5 Astros prospect) to fill their dire need of young, good pitching.

José Urquidy is just the fourth rookie in the last 30 years to throw a scoreless start in the World Series. pic.twitter.com/FZO2eWqLeo

This may seem like a lot to give up for one month and a postseason of Realmuto. However, teams who believe they are one piece away from competing for a championship have been prone to giving up more assets in hopes of winning the Commissioner’s Trophy (or, just a piece of metal, according to MLB Commissioner Rob Manfred).

Could This Actually Happen?

The Phillies trading J.T. Realmuto may seem outlandish on the surface, but it could actually benefit the Phillies in the long-run if they could in fact re-sign him in the off-season instead of extending him right now. The possibility of that happening, exactly how the Phillies would want it to work out? Slim.

I still think that the best course of action is to come to an agreement with Realmuto as soon as possible. Nevertheless, if the negotiations continue into the season with no resolution in sight, trading Realmuto could become more and more possible if the Phillies are out of the playoff race.

Building off of that, in a 60 game season, it will take a lot for the Phillies to feel completely out of the playoff race at the 30-35 game mark. Even if they are below .500, all it would take is a four of five game winning streak to catapult the Phils back into contention. If the Phillies are anywhere near contention for the playoffs, they will not be trading away their second best player. Well, unless they want to see Philadelphia burn to the ground.

To put a number on it, I would say that there is less than 5% of a chance that the Phillies would even consider pulling off this plan. Yet, if they were to do it and the plan worked out with J.T. re-signing in the off-season after trading him away, the Phillies executives would look like geniuses.

If there is anything that the last few months have taught me, it is that if there’s a chance for anything to happen, it can happen.

Also, it is worth noting that if your $330 million prized possession is this vocal about wanting to keep a player around, the organization should probably do it. 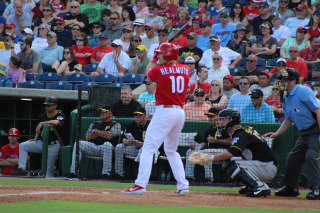