Eagles Flyers Phillies Sixers About Us Write For Us
Niskanen Suspended, Bad Blood Boiling After Game 5
Round 1, Game 6 Preview: Flyers-Canadiens

While the Philadelphia Phillies faithful focus on their relief corps, this glaring flaw has distracted many from a rotation some had doubted during the offseason. And those locals argued the five-man staff doomed the Fightins to fourth place, but others said a third place tie or worse. Yeah, dead last?

For Phillies and New York Mets fans, this is the third summer where both organizations are competitive. Usually, one doesn’t have a shot at postseason glory, but injuries on both teams have been more than enough to sink those chances since 2008.

“Such seems to be the disposition of man, that whatever makes a distinction produces rivalry.” - Samuel Johnson

In ‘20, the injuries are piling up for muscles, backs and ligaments at an alarming rate aside from COVID-19 incidents. Every day, the number of players placed on the IL (injured list) increases despite precautionary measures.

The why is the downtime between March and July: Some players had more resources than others. Additionally, the shorter ramp-up time and the start-and-stop circumstances have roughly doubled the injury problem.

The 2019 finishing order for the National League East based on months missed was the Atlanta Braves (four months), the Washington Nationals (five months), the Mets (19 months) and the Phils (40.5 months). Unsurprisingly, it matches their position in the standings as well.

For the third consecutive season, my prediction is the healthiest club has the best shot to capture the NL East pennant. Healthwise, no team has a guarantee of good fortune every campaign.

During the course of previous 162s, Braves fanatics usually had no issue with me posting on their site because they were competitive the last two years. But this summer, they frowned on an honest assessment of both organizations. Translation: The Braves are in a fleeting position atop the division.

I expected the usual from the Atlanta faithful about losing to the Miami Marlins and Baltimore Orioles, but they were in no mood to knock the red pinstripes. Therefore, the reality of having only one dependable starter is a buzzkill, and he faded after his first 10 performances in 2019.

Following their World Series victory, Washington is off to a slow start due to the virus, injuries, and their bullpen shortcomings. Plus their five-man staff  is down to Max Scherzer, Patrick Corbin, a struggling veteran, and a five-slot replacement because Stephen Strasburg still has a hand-related malady involving nerves.

In Gotham, Metropolitans fans had expected --like ‘19-- to have a contenting squad, and they did until their rotation was Jacob deGrom, a rookie and three journeymen. So, finger-pointing is everywhere: the owners, the second-campaign general manager, the rookie skipper, their drafting record, etc. Sound familiar?

In March and June, many locals here were unhappy with the rotation, but now it’s the pen and struggling regulars: Most hitters are streaky. Yeah, Richie Ashburn won the 1958 batting title with a .350 mark despite a two-week slump, but some may expect more consistency today.

While the envied rotations of their rivals have suffered injuries and reduced effectiveness, no one in March had foreseen the Phillies having a decent five-man staff in the NL East due to six healthy hurlers. The Mets, thought, haven’t been as fortunate with their top pitchers having either season-ending surgery or opting-out.

Barring an improvement, this will catch up to them because deGrom skipped his opportunity against the Phillies with a stiff neck after a blister-marred appearance previously. And left-handed rookie David Peterson (3-1, 2.91 ERA) is now on the IL with left shoulder fatigue.

In the bullpen, Joe Girardi has Hector Neris, Jose Alvarez, Tommy Hunter, Adam Morgan and Blake Parker. And the other relievers are youngsters Girardi hopes one or two will take advantage of this situation, while they mop up lopsided contests. Meantime, David Robertson and Ranger Suarez are ramping up in Allentown.

Rule of thumb: Four out of every five outings must be acceptable, not perfect. However, 75 percent is the minimum after two months.

For Mets supporters, they are again depending on 2019’s closer Edwin Diaz with 2018’s ninth-inning man Jeurys Familia in a setup role. Yes, both were ineffective in ‘19. And they also have lefty Justin Wilson, an effective set-up man, free-agent signing Dellin Betances, and demoted starter Steven Matz (0-4, 9.00 ERA).

For the Phils, JT Realmuto is hitting .274 with eight bombs and 21 RBIs: This projects to 62 round-trippers and 162 RBIs for 162 games. And as I wrote during the winter, expect a dramatic increase in his stats due to a full summer without learning an entire pitching staff again.

In Queens, their faithful expected production from Pete Alonso, Jeff McNeil and Michael Conforto. But Alonso had started slowly before Dominic Smith (the better defender) challenged him for his first base job. Now, Alonso is hitting .247 with five homers and 13 RBIs projecting to 31 blasts and 81 RBIs.

While McNeil has a .269 mark, Conforto is averaging .312 with four round-trippers and 13 RBIs, which projects to 25 blasts and 81 RBIs for a full year. But Cano, Davis and Smith don’t have sustainable production, although New York (NL) has played 26 contests (43.3 percent of 2020).

In their three-game series at the Bank, the red pinstripes scored 18 runs to nine for the Metropolitans. Ergo, hitters pad their stats against moundsmen not named Nola and Wheeler. And what two words did Dutch Daulton have to describe the situation against the bottom two rungs of other rotations? Hittin’ time!

Phillies vs. Atlanta Braves in 2020 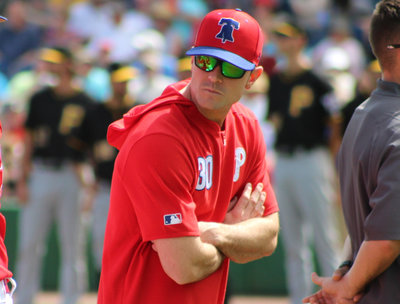