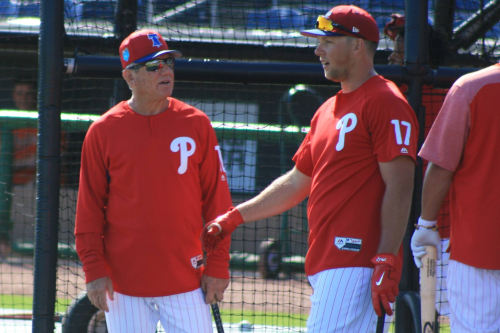 Who would you take?

You're getting a high quality player no matter which direction you go.

But who are these players?

Player A, as I am sure you have guessed, is Rhys Hoskins. The statistics are his 162 game average for his career.

So, who which of his Phillies teammates is Player B?

It is MVP candidate and one of baseball's brightest stars, OF Christian Yelich of the Milwaukee Brewers.

Not so different, are they? Let's take a look.

After the roughest stretch of his career and one of the worst half seasons in baseball last year, the Phillies fanbase entered 2020 divided on the slugger's future with the club.

His second half of the 2019 season was brutal, no doubt. In 313 plate appearances, Hoskins managed just 46 hits, good for a .180 batting average. The power he showed since his 2017 debut was also sapped. He hit just nine home runs and drove in 26; compare that to the 20 long balls and 59 RBI in the first 89 games of last year with no immediate injury to report and one has to wonder what happened to the first baseman.

But streaks don't tend to last an entire half season, in either direction. Hoskins is, by Player A's numbers, a "let's meet in the middle" of his 2019 first and second half splits.

He continues to draws walks an elite rate, ranking fourth in baseball with 21 free passes. Keep in mind the Phillies have only played 24 games while others are in the 26-30 range.

Manager Joe Girardi continues to show faith in Hoskins, batting him second in the lineup after spending 62 percent of his career in the middle of the order (he had 104 starts in the 2-hole in 2018).

This season, according to FanGraphs, he has barreled 11.5 percent of his batted balls, which ranks second to only his rookie 2017 campaign.

He is chasing balls out of the strike zone eight percent less than his career mark and when he swings at a pitch in the zone, he is making contact at an 83 percent rate. Couple that with his BAbip of .300 (around league average) and the numbers suggest a continued rise in batting average, somewhere between .240-.255, on top of an elite walk rate.

His speed may not be what a prototypical 2-hole hitter delivers, but as Billy Beane once said, I think, "He gets on base."

Remember, he is only 27. It is not time to give up on Hoskins yet. He may never be a Ryan Howard-level player, but let's face it, not many are.

He is starting to heat up and we should enjoy the ride while we're on it.

View All Posts By Greg Hall

View All Posts By Greg Hall