The Phillies (21-18) are about to take part in their first seven game regular season series in the team's storied history... one would think.

It turns out that the Phils have played multiple seven gamers in 1930, going 4-8-2 against the Chicago Cubs & Boston Braves in 1930, most recently.

The team travels to south Florida for a series against the Miami Marlins (19-19) over five days that will feature two seven-inning doubleheaders and could propel one of the two teams to the fast track for a playoff spot.

Much about the starting pitching matchups is unknown beyond Thursday's battle between Jake Arrieta (3-4, 5.67 ERA) and RHP Sandy Alcantara (2-1, 3.78 ERA).

As of this writing, manager Joe Girardi has not announced any other starting pitchers, but it lines up that every pitcher in the rotation plus Vince Velasquez will take the hill... and that still will not be enough starters.

The teams will play doubleheaders on Friday and Sunday and with Velasquez last pitching in a loss to the Boston Red Sox on Wednesday, he will conceivably start one of the two Sunday games. That leaves the Phillies without a starter for the back end of Friday's twin bill and Monday's series finale.

Who are the Phillies best options to fill those spots from the 40-man roster?

LHP Ranger Suarez has not pitched much since being activated from the IL and could give the team five solid innings.

LHP JoJo Romero came through the minor league system as a starter, but has been a key weapon out of Girardi's bullpen.

There is always LHP Cole Irvin... moving on.

Young right hander Adonis Medina could be in line to make his big league debut. Once a former top prospect, Medina could prove his worth by giving the Phillies a strong spot start.

There is also the possibility Girardi elects to have a "bullpen game," where a haul of relievers are used in 1-2 inning bursts to get the Phils through the game. The pen will need as many arms as possible to survive seven games in five days, so this option seems the least likely.

One sure thing is the Marlins will be sending top prospect, former Phillie and future ace RHP Sixto Sanchez to the mound. Sanchez carries a 2-1 record with a glistening 1.80 ERA into the series. He has struck out 25 hitters in as many innings, has a WHIP of just 0.92 and has repeatedly touched 100+ MPH across his four starts. He'll most likely start one of Sunday's games or Monday to finish the series. If he gets to square off against J.T. Realmuto, every eye in Philadelphia will be on it... unless, of course, it is during the Eagles season opener Sunday.

The games are as follows:

Both teams currently occupy a National League playoff spot, with the Phillies in fifth and Marlins eighth. Winning this series could solidify at least second place in the NL East.

With 17 games in 14 days, the Phils hopefully enjoyed their off day Wednesday while the Marlins were crushed by the Atlanta Braves. Maybe that is enough to carry the momentum in the Phillies favor?

The Marlins are only 2-9 at home this season and while the Phils are 6-8 on the road and 7-3 in their last 10 games overall, the Fish are 12-10 against the Phillies over the last two seasons.

The Phillies will have to reverse their 90 year track record and take five of seven; if they can do that, not only will they practically lock up a position in the playoffs, but the NL East crown could be in sight. 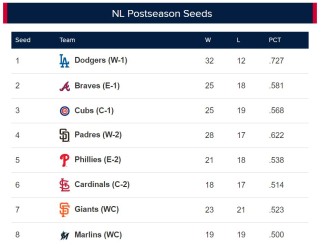