As the Philadelphia Phillies games on the schedule dwindle, the calendar says September; and I’m not writing about free agents for 2021, the franchise’s future stars, and the organization’s finances regarding the competitive-balance threshold for next year. Instead, my articles will involve strengths, weaknesses, and possible fixes.

Even though the pen has been the Achilles' heel of the Phillies, one pitcher stands out as a potential answer. And, recently, Joe Girardi took his first step in that direction on Sept. 10 when he signaled in the sixth inning for the reliever to face an opposite-side bat (not a pinch hitter). But will this hurler earn high-leverage roles?

“The most successful people are those who are good at plan B.” - James A. Yorke

For relievers, ERAs can be deceptive because a moundsman can have nine solid outings out of ten with one clunker for a 5.00 ERA. But if he’s successful in 8 out of 10 chances, he’s at 80 percent, and his effective rate meets management’s expectations with 75 percent acceptable for a season.

Girardi has vocalized and demonstrated his survival plans for the bullpen, and it includes his roles from the sixth frame through the ninth with a potential closer and maybe two October relief additions. Unfortunately, many fans block out the skipper’s words with their “dominant” views. Fandom managers, no?

Hector Neris has the most important job in Giradi’s relief corps because he enters the game in the last three frames depending on which inning has the toughest outs. So, notice who hits in the seventh, eighth, or ninth frames; and you’ll know exactly when the split-finger pitcher will get the call.

For left-side bats, Tommy Hunter has the arsenal to extinguish these threats. And he also handles setup duties and the ninth inning if Neris or Brandon Workman aren’t available due to maximum usage.

When it comes to closing, Workman is only the ninth-frame option if it’s not the meat of the order or a left-heavy lineup. Basically, the outs can be more difficult in the seventh or eighth innings. And, perhaps, that will ease some of your anxiety with three outs remaining.

For the 10th inning, Blake Parker has been the skipper’s go-to arm for one frame, so the home offense can plate the winning run. And he also appears to be the opener due to doubleheaders and rotation injuries of late. In fact, he’s been the most reliable reliever the manager has.

Southpaw Adam Morgan had returned on Sept. 12 to his setup role and has continued his success as a seventh- and-eighth-inning hurler. Last summer, he had a 90 percent rate of acceptable performances. Despite that percentage, though, he has been better with someone else getting the final outs.

Someone will have to step up. The closer is going to have to have one pitch at least one pitch in his arsenal he can command. Along with the right demeanor. Right now I don’t like the “faces” I see on the mound. Gotta have the right face with the right look in your eyes. https://t.co/1PmgIMonp4

As writers and a former closer have also noticed, lefty Jojo Romero could be the answer to the ninth inning. Yet they don’t tweet or question Girardi during the postgame interview about it, but it’s an earning process. Limited time, no?

Firstly, Romero worked in the sixth and seventh frames on Sept.10, but the result wasn’t completely fruitful for this new role. In his first two appearances, he faced 10 batters and retired all three left-handed hitters but only two of the seven right-side bats.

Pitching, however, into the eighth inning against the New York Mets on Sept. 15, lefty Romero suddenly entered the bases-loaded contest with one out in the sixth frame against a right-side bat due to Arrieta’s injury: one pitch for two outs! Well, he retired both right-handed hitters with double plays.

This is a running tally to take inherited runners into account (through Sept. 15).

Due to taking a 105.3-mph bullet to his groin, Jose Alvarez is on the 45-day IL (injured list) with a testicular contusion. And he won’t be available until the playoffs. Presently, he’s just started light activities in Allentown.

With only two acceptable outings out of six, David Phelps hasn’t been the reliever expected by Girardi, the Phillies and the fans. But Phelps had a 2.77 ERA and nine acceptable performances out of 12 (75 percent) for the Milwaukee Brewers. So, no one anticipated a diminished effectiveness when the Fightins picked him up.

David Hale lowered his ERA to 3.55 with a solid fourth appearance in long relief after not pitching between Aug. 11 and Aug. 30. Therefore, he’ll be more dependable with work to keep him sharp, although a long man’s chances have their limits until the playoffs.

Do you wonder why the Phillies continue giving the ball to Heath Hembree? Well, he had nine acceptable outings (one so-so) out of 10 with a 1.86 ERA for the Boston Red Sox. But the red pinstripes were the club responsible for the worst game he had before his now mop-up role.

In the postseason, five starters could be pitching because of no days off until the World Series. So, Vince Velasquez or Spencer Howard --if healthy-- could enter from the pen or piggyback if a starter runs into trouble.

Since Howard is dominant his first time through the lineup, he could also be a valuable setup man. Or Velasquez might even close if the Fightins have a need in October.

Despite the unusual nature of 2020’s trading deadline, many locals didn’t make the distinction between a “162 and 60 game” schedule. Ergo, their expectations were the same for general manager Matt Klentak to deal for a solid closer, and his dismissal is just in their eyes.

For armchair GMs, Josh Hader was a perfect fit, but they didn’t detail any circumstantial mechanics. To illustrate, Milwaukee is one game out for the second wild card, and they had no reason to abandon their playoff chances.

Because the Phillies moved Connor Seabold for Workman and Hembree, what would pry Hader loose from the Brewers? And do you even doubt they would start the negotiation with Alec Bohm and Howard? Plus the faithful didn’t like swapping Seabold to Boston, but they’d revolt if Bohm or Howard were in a trade.

For fans who only see a star they want and nothing else, they have sole possession of a so-called winning argument. And they have someone to blame for their disappointment in the Phillies current position standings-wise, and who is Klentak to them? Their scapegoat! 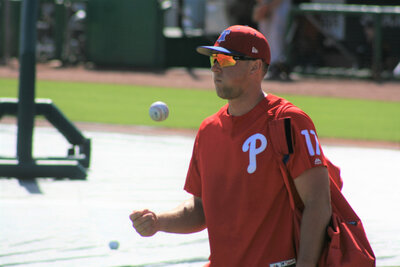