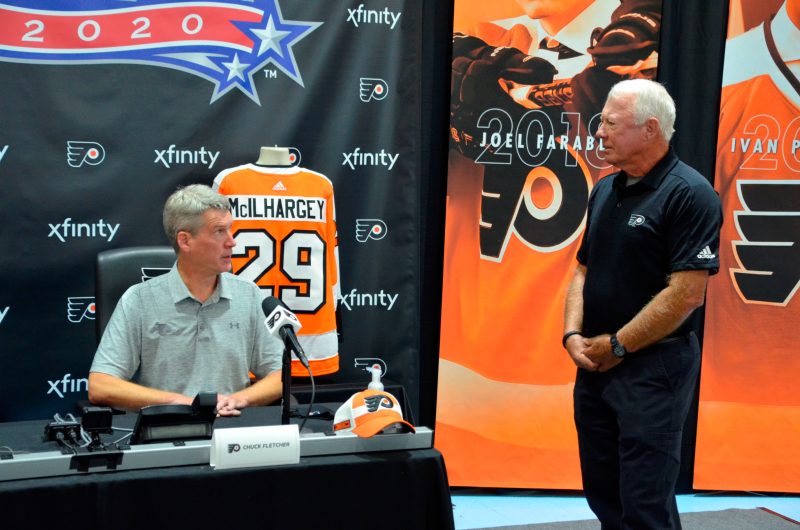 The free agency period opened on Friday at noon, and the typical free-agency frenzy wasn’t the mad show that it was in previous years.

Many players are electing patience, hearing out offers. There was no tampering period as there usually is in free agency, so every team was able to make their pitch against one another at the same time.

It is much more likely that the Flyers will try to explore trade options to fill the void left by Matt Niskanen’s retirement. The team would like to add a Top-4 defenseman, but would likely need to lose cap before taking more on. A couple of names floating around including Matt Dumba, currently with Minnesota, and Nate Schmidt, currently with Vegas.

Nate Thompson is the only remaining UFA the Flyers had that has yet to sign a contract.

The Flyers will also have to make any further roster moves with new contracts for Phil Myers and Nolan Patrick in mind. Both players were extended qualifying offers earlier this week, but have yet to officially sign and add their new cap hits to the books. As of Friday, the Flyers had approximately $8.6 million in cap space.

The Flyers lone deal on Day 1 came in the form of defenseman Derrick Pouliot. Formerly a Top-10 draft pick at eighth overall in 2012, Pouliot is a 26-year-old that will likely take a spot in Lehigh Valley. His cap hit should he reach the NHL is the league minimum $700,000 and the deal is a two-way deal.

The Flyers may be best to practice patience this offseason. There was a run on goalies on the first day of free agency as everyone looked to firm up plans in net and several top defensemen have signed – the aforementioned Shattenkirk and Brodie as well as Torey Krug and Chris Tanev. Most of the forward high on the free-agent list remained unsigned through the first day.

As teams start to pile up free agents, the Flyers may be able to benefit from teams needing to move cap space as the trade market picks up. They have a need defensively as previously mentioned, and are also looking to add a veteran center to the bottom-six as a security blanket given Patrick’s health and the overall youth of the rest of the players in the system that could fill the role.

On top of that, it would be an added luxury if the Flyers somehow managed the space to add a shoot-first player or pure goal scorer, though with limited cap space that is more of a pipe dream at this point.

The one deal the Flyers did make is hardly noteworthy, but it’s really the way the free agent period could go moving forward. Many teams have limited cap space which will be a problem as the season gets closer. Many players are willing to wait to sign until they know when they will actually be playing again. It’s a big waiting game right now and without the current cap flexibility to sign someone before moving additional cap space, the Flyers are forced to sit back and primarily watch what’s happening.

It wasn’t going to be the usual free-agency frenzy. It was going to be drawn out over days. Just because it didn’t happen on Day 1 doesn’t mean the Flyers are completely sitting out on making moves. They are just biding their time until the right move comes along.