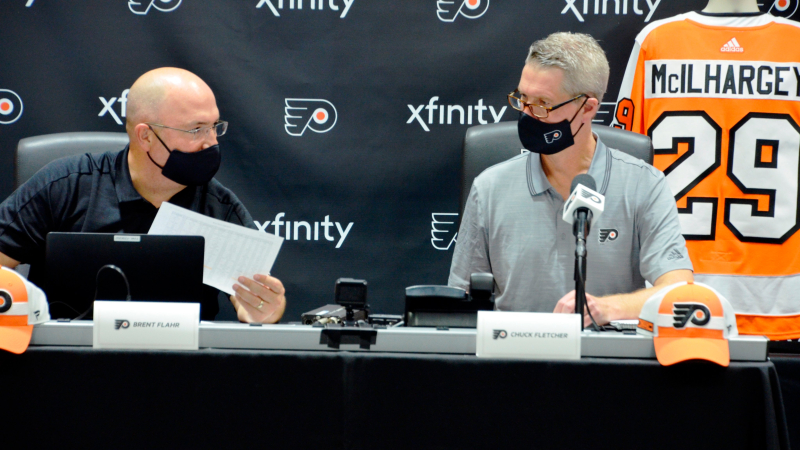 When we look back on moments in sports history, there will never be another season, or offseason, quite like 2020 in the NHL. After making a 24-team return to play and completing the 2019-20 season in just under two months time, the NHL packed all of the major offseason events into one week with the NHL Draft taking place on Tuesday and Wednesday this week and setting the stage for the open of free agency on Friday.

On Tuesday night, the Flyers selected winger Tyson Foerster with the 23rd overall pick and GM Chuck Fletcher not only got the best player available on the team’s draft board at the time, but lined up Wednesday’s potential.

“We had a group of four or five players and we felt that one, two or three of them would be there when we picked. It kind of followed our list pretty well. There weren’t a lot of surprises today. I think we anticipated a lot of names that were called. Tyson was a player that we thought we had a chance of being available to us when we picked and he was,” Fletcher said. “Certainly we’re very, very happy with that. It’s a good draft. There’s a lot of good players.

“There will still be, based on what our list looks like right now, there’s at least 15 players right now I think we would be thrilled to select at 54. Basically we should have a really good chance at falling into one of those players. Regardless of the position, we’ll be very happy to call the name.”

On Day 2 of the draft, turns out the Flyers were able to call two of their names, second-round pick Emil Andrae at 54th overall and center Zayde Wisdom at 94th overall.

“We followed our list and did the best player available at every pick,” Fletcher said. “There was still, I felt, about 15 players that we would be very happy to draft in the second round. We were able to draft two of them. Obviously Andrae fell to us, fell a little more than what we expected. We were very happy to draft him. Somewhat surprising to us, Wisdom was still available in the late third and we scrambled to try to pick up an extra pick there to select him. We were able to do that. We’re very happy. We think we made some high-quality selections.”

The Flyers again jumped up to take another forward in the fifth round after trading their original fifth-round pick to get Wisdom in the fourth. They moved both seventh round picks they had to get back into the fifth and select winger Elliot Desnoyers. They finished by drafting left winger Connor McClennon in the sixth round.

“[Desnoyer’s] a player that we saw in Moncton last year. Moncton was the best team in Canada before it got shut down,” assistant GM Brent Flahr said. “Just because of their depth and how good they were up front, he didn’t really get the opportunity. Always mentioned to keep an eye on him. From a strength standpoint, he has a long way to go. Another kid who’s very smart. 200-foot player. Really good engine. He’s stronger. He’s faster. He’s obviously playing with a lot of confidence.

“Connor McClennon, he’s a top pick in the Western Hockey League. He’s been one of the top players in that age group for years. He is undersized. He is going to have to get stronger and put on some weight over the summer. He’s been a prolific goal scorer among his age group. In order to have a chance as a smaller player, you need to have that engine. His competitiveness is very good and he has the ability to shoot the puck in the net, which is what got him drafted.”

With the NHL Draft in the books, there is very little time to sit back and evaluate everything with the draft. Free agency opens in just over 24 hours and there will be plenty of talented players available. The Flyers now have a hole on the blue line after Matt Niskanen’s retirement and could also look to bolster depth at the forward position. Will it be through free agency?

“I’m not sure. It’ll depend on the opportunities that are there and the prices,” Fletcher said. “As I’ve mentioned before, we like our group. I think our forward group is stronger than what it was at the end of last year. We’ve lost Niskanen, but we still like our defensive corps. We like our goaltending. If we can improve our team, we will, but we’re not going to spend money just to spend it. If there’s some ability to add a player on the right deal at the right cap price and the right term, we’ll do it. If not, we’ll certainly wait. I think there will be opportunities along the way to address whatever needs we feel we need to address.”

It will be a unique free agency period. Sure, there will be a rush on Friday when the period opens, but there could be a lot of patience required as the league works out a plan for playing next season and a timeline becomes clearer. It may mean less news immediately and more as the offseason progresses. But we won’t have long to wait to see if the Flyers get active immediately.