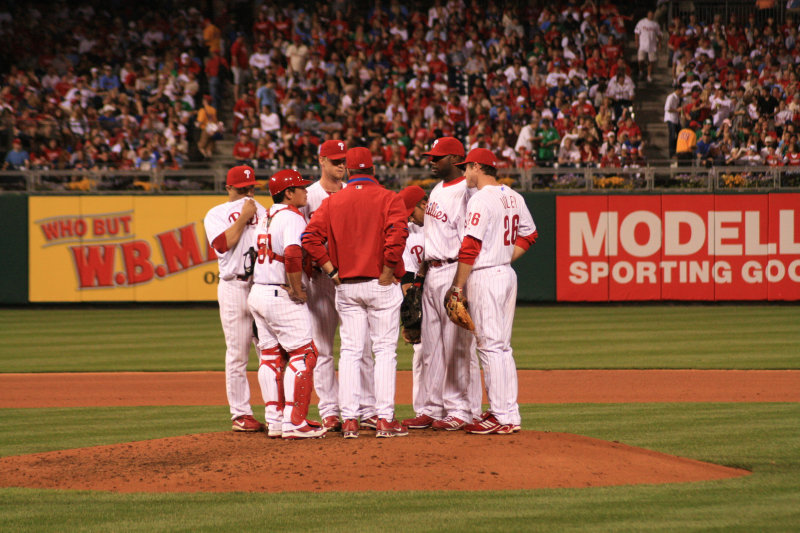 In an offseason filled with desperate scrambles to overhaul our bullpen, addressing some underwhelming offensive stats, and deciding whose soul we have to sell to afford to keep J.T. Realmuto, one might not have given a good deal of thought to how the Phillies infield should look in 2021. It’s not the most pressing issue in the clubhouse, but it’s one that absolutely needs a considerable amount of attention.

The infield defense left a lot to be desired this past season. No real cohesion between the players in the diamond, allowing 25 extra hits within the 60 game season, and an elbow requiring surgery befalling first baseman Rhys Hoskins late in the season was a perfect maelstrom to render the Phillies infield mediocre at best.

So how do they fix the problem?

Simply put, the most important factor is where Joe Girardi positions his infielders. However, this task isn’t as easy as it may appear. A rather unfortunate series of events has complicated things—shortstop Didi Gregorious hasn’t yet agreed to another year on his contract, the possible retention of a designated hitter in the National League for the 2021 season could see Hoskins go from first baseman to DH, and the question of who should be the everyday second baseman has Girardi’s work cut out for him. So let’s break it down…

At first base, there are two viable options: Rhys Hoskins and Alec Bohm. Hoskins is expected to fully recover from his elbow injury in time for Opening Day next season, and while his defense normally sits at or just below the league’s average numbers, he showed later in the season that he still had the potential to be a dominant and reliable first baseman. Bohm is no slouch defensively, but he should get at least one more season at third to feel out whether or not that’s a position he could stick with through the latter half of his twenties. However, with the possibility of Hoskins becoming the Phillies full-time DH, Bohm might be moved to first base.

Then there's the second base conundrum. Girardi had Scott Kingery slated to be the everyday second baseman, but Kingery quickly proved that second base was no longer his strong suit like it had been in the minors. Failure to adequately cover both the middle and the area between first and second base left a gaping hole in the infield, and the legs that earned him the nickname “Scotty Jetpax” didn’t serve him like they were expected to. Jean Segura seemed much more comfortable at second (at least more so than he was at shortstop), making a fairly convincing argument as to why he should be the regular second baseman. The thing with Segura is that should Bohm switch corners from third to first, Kingery would most likely play second while Segura manned the hot corner. A position he’s capable of doing, but probably not the one he’d prefer.

Shortstop is probably the simplest—we either sign Didi Gregorious to another year or we bring in a new shortstop. Segura’s numbers at shortstop weren’t spectacular, and it’s clear that he prefers second base. Kingery, despite still being the resident utility man, isn’t best suited for a consistent stint at shortstop (defensively, he’s the best option for center field, but the Phillies outfield is an issue for another day.) Phil Gosselin, who is a respectable utility man in his own right, could do it if he had to, but it’s probably in Girardi’s best interest to bring in a career shortstop rather than using a player who doesn’t specialize in the position.

Third base is relatively clear cut as well. It’s either going to be Bohm or Segura, both of which are solid options. Bohm would be preferable, seeing as it gives him the opportunity to settle into the hot corner and make it his position, but if he’s needed at first base, Segura can absolutely cover third.

The infield puzzle is not a matter of life or death, but the Phillies can’t afford to have another disjointed defensive performance this upcoming season. Players need to know that they’ll play a position consistently in order to form a seamless connection between the infielders. A nearly decade-long playoff drought can only be ended when our defense is a smooth, well-oiled machine that can anticipate each other’s movements by the most subtle move of a muscle.

The disappointing reality is that defense wins you World Series titles, and this one couldn’t even take us to the postseason with an expanded playoff format. Need I say more?