Eagles Flyers Phillies Sixers About Us Write For Us
Phillies Lay Off Mackanin, Hollins and Other Scouting Staff
YWT: The Philadelphia Flyers Podcast - YWT #96 - Doc-isms

Phillies: Dollars and Surprises ahead for 2021

While the outline of the ‘21 Philadelphia Phillies is forming, stating more is mere speculation before November. For many organizations, though, 2021 will be a summer of financial water-treading, but some will take advantage of roster opportunities from unexpected franchises unavailable in previous offseasons.

The Phillies faithful shouldn’t harshly --harshly-- judge managing partner John Middleton until they see if he plays it safe or gambles on a one-of-a-kind situation for a more competitive ‘21 campaign. Yes, he has the financial clout to acquire a top fireman for less-than-average market value, but a closer will still be expensive.

Writers draw conclusions based only on partial information because clubs keep internal strategy away from the media. However, they will at times unintentionally reveal a few clues a scribe can combine with standard front-office procedures.

Understanding fans’ logic is more difficult, but one can take an educated guess after hearing familiar complaints and demands from 20 other fan bases. Translation: Supporters must subliminally imagine unlimited financial restraints and would just sign the top player if they owned the team. But easy it isn’t!

Partitioning is my term for how fans can easily justify maximum spending. Basically, they start with a total like $80 million, and Trevor Bauer is affordable at even $50 million on a one-year deal. But so too are JT Realmuto at $30 million per 162 and two stud relievers at $20 million combined.

Ergo, the quick conclusion of armchair GMs is the Fightins can afford to ink all four stars. But if you tally the four, the cost is $100 million or $20 million more than available even though individually they all fit within the budget. Unfortunately, the total isn’t obvious when those calculations are on different days.

While the faithful almost always want the top-dollar player, the Phils realize signing Bauer instead of re-upping Realmuto and picking up two bullpen pieces will cost more. Plus the organization will also be more competitive because they already have their one-two punch with Aaron Nola and Zack Wheeler.

In fact, most execs have been extending the contracts of their younger stars until they turn 30, and they add two club options for two seasons of slight decline. So, the expensive free agents are older with their best days behind them, and their compensation is for past performance except for the Bryce Harpers.

Some front offices are exceeding the CBT (competitive-balance threshold) by $20 million and paying the $4 million penalty, but, then, they drop under the CBT for the next campaign to reset the tax rate. Realistically, the red pinstripes could need the extra $20 million AAV to remain competitive over the winter and for the July deadline.

The big spending days of even the New York Yankees have changed. To illustrate, they went to $265 million AAV for 2020 or $57 million in taxable expenditures because they expected to be only one ace away from another championship and pay a normal monetary penalty of $24.65 million.

With millions coming off the books for ‘21, the Yanks’ thinking is dropping under the $210 million CBT to reset the tax rate. And if New York (AL) isn’t ignoring the Luxury Tax, no franchise is. Basically, re-signing their older stars isn’t in their plans, and their supporters won’t be happy about it either.

Yankees fans want more spending and won’t understand --or try to-- how they can ink Gerrit Cole, not Realmuto. Translation: Those days were 5-6 years ago because the MLB is pushing parity and will only increase penalties until they get it. So, their puzzled fan base will be like those now of the Boston Red Sox and Chicago Cubs.

In my last article (link at the bottom), I listed 16 players as the foundation of 2021’s 26-man roster, but the Phillies could trade from those regulars, starters and relievers. And the payroll tally was $148.3 million AAV leaving $61.7 million AAV management could exceed by up to $20 million AAV for an affordable one-season tax.

If the Fightins have an opportunity to win the National League East pennant and/or acquire an otherwise unavailable star due to MLB’s recent losses, their basic strategy is to exceed the $210 million AAV by $10 million each in the offseason and July. But their 2020 offer of $7 million to Dellin Betances would have already done so.

By picking up a lower-rung starter, the Phils could move Vince Velasquez to the bullpen, and he would join Hector Neris --currently their best reliever-- and southpaw Ranger Suarez who earned the spot with his 2019 numbers. Realistically, signing a ninth-inning pitcher and a left-hander would leave three openings.

To fill those slots, the red pinstripes could re-sign David Robertson for $2 million tops: his club-option buyout already plus rebuilding-value incentives. And the other two seats would go to spring training contenders including Jojo Romero and Connor Brogdon. Ergo, sign a closer and a lefty.

Aside from re-upping Jose Alvarez, Justin Wilson could be the second or third portsider besides a potential closer. Unfortunately, Adam Morgan will miss significant time, and the Phillies can’t tie up money without normal financial certainty. For now, though,  Seranthony Dominguez will be the lone exception.

While the locals would prefer Alvarez, who earned $2.95 million in ‘19 for his final arb summer, Wilson will probably command little more than $5 million this winter. For ‘21, though, a contract’s length could be only for one campaign, but Alvarez still might cost $1 million less.

Because Kenley Jansen is no longer the dominant fireman prior to 2018, the Los Angeles Dodgers will push to re-up his possible replacement Blake Treinen for two seasons at $10-11 million per 162. However, the Dodgers recently have listed late-frame relievers as a priority, but they --finally-- inked Treinen last year.

Under normal conditions, Alex Colome’s entrance into free agency would draw strong interest and a nice annual increase from his 2020 pact of roughly $10.5 million. Instead, he and other available hurlers have no idea how COVID-19 will affect next summer’s schedule, attendance and the winter spending of contenders.

At $5.3 million for his final arb campaign, Liam Hendriks is another closer the Fightins could pursue on a one-season deal with a club option if they decide to limit contract length: a real possibility for 2021. Normally, most organizations would want a two-year commitment, but ‘21 is anything but typical.

To reiterate the Yanks’ thinking for 2020-21, their plan was to quickly sign a stud to head their five-man staff by overpaying and employ cost cutting to drop under the CBT and reset the tax rate for the following 162. Ergo, they must shed $55 million AAV to accomplish their goal.

In fact, Scott Kingery at $4 million AAV and Britton at $13 million AAV could account for a $9 million drop in the Yanks’ AAV, and the Phillies could acquire a much-needed ninth-inning arm  to challenge for the NL East pennant. Yes, both franchises would add balancing pieces to the swap.

While many things must go right to pick up Britton with his long, successful track record, this might be the only time it’s possible. Originally, only the Yanks could risk the southpaw making a comeback from his injuries in 2018. But moving Kingery may also hinge on another’s return. Yes, Gregorius. 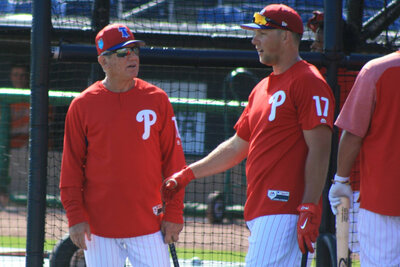