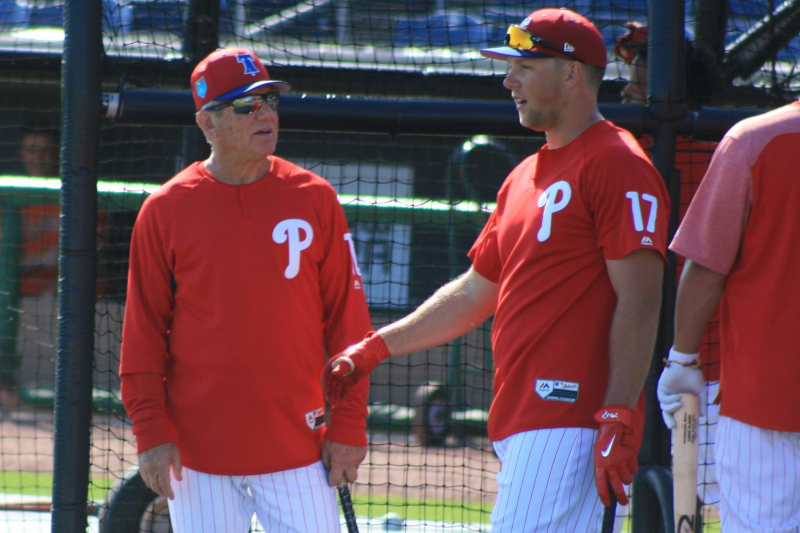 The Phillies were without first baseman Rhys Hoskins the last two weeks of the season, something which arguably may have been the difference between the one extra win necessary to make the playoffs.  While it was clear that Hoskins had a strained UCL in his non-throwing arm, the Phillies tried to see if they could get him back before the season ended.  Hoskins did not, and we learned Monday that he underwent surgery.

According to the Phillies, Hoskins underwent "Tommy John" surgery last Friday.  That surgery could mean that Hoskins will be out from four to six months, notes Matt Gelb of the Athletic. That could put the start of the season in doubt.

A four-month absence from baseball activities would carry Hoskins through January.  Six months would mean through the month of March, which of course would be all of Spring Training.   Then there are questions as to whether or not he would be in baseball shape ahead of the season.

The good news is, Hoskins will not miss the time of a pitcher; pitchers tend to need an entire calendar year to recover from this surgery on their throwing elbow.

One comparable player some have pointed to is former Cincinnati Reds shortstop Zach Cozart, who underwent the procedure in August of 2011.   Cozart recovered to be in the lineup by Opening Day 2012.  The timeline, however, was about seven weeks ahead of Hoskins.

So hopefully for the Phillies, Hoskins recovers by Opening Day.  The Phillies could add some depth in the organization this Fall at first base or the infield, freeing up Alec Bohm to play some first base.  The Phillies certainly have options.

But the Phillies also have many questions, and the whole offseason to answer them, beginning with who will lead baseball operations.