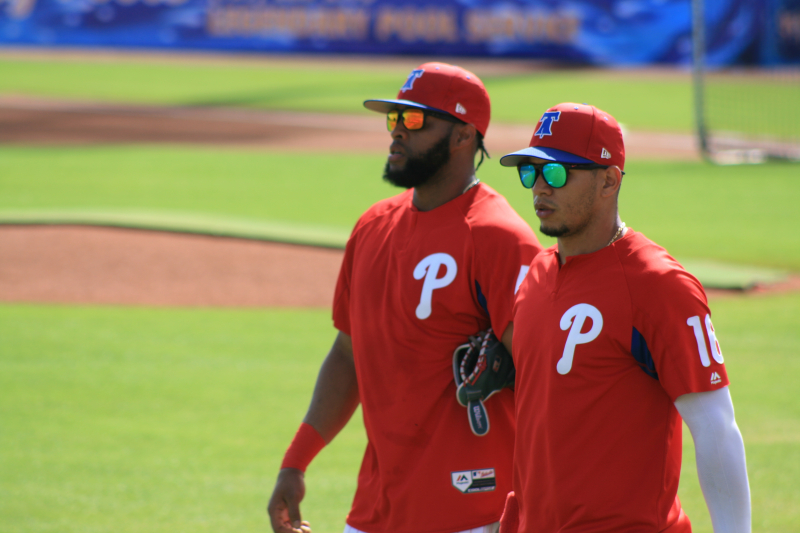 The Phillies rebuild officially began in late 2014, when former Phillies general manager Ruben Amaro, Jr. started making some trades.  Jimmy Rollins went to the Los Angeles Dodgers to acquire Phillies rotation mainstay Zach Eflin.  Then that season off went Chase Utley and Cole Hamels, followed by Jonathan Papelbon.  It was not until after those deals that Amaro was let go.  The real rebuild began the following offseason under Matt Klentak.

There was not too much for Klentak to do in terms of a teardown at that point.  There was one trade, trading Ken Giles to the Houston Astros for Vince Velasquez and a bucket of balls.  Carlos Ruiz was ultimately another trade and Ryan Howard's contract expired.  But after all the tearing down, one move seemed to handcuff the Phillies as the dominos carry forward.

The deal in itself wasn't terrible.  Yes, it was probably a little more than other teams would have paid.  But Santana has a long history as a strong bat and is a switch-hitter.  But by the following fall the Phillies were "shopping the hell" out of Santana.

The problem was, Rhys Hoskins, a first baseman, was thrown into left field to keep (of all people) the bat of Tommy Joseph at first base in 2017.  After the Phillies thinking that Hoskins was passable in 30 games in left field in 2017, they learned they were wrong in 2018. Something had to give.

Santana was traded, along with shortstop J.P. Crawford for infielder Jean Segura, reliever Juan Nicasio, and reliever James Pazos.  That also meant that the Phillies signed Andrew McCutchen to replace Hoskins in left field, who took his rightful place at first base.

For the Phillies, that means in 2021 $30 million is committed to both Segura and McCutchen.  Segura is due another $15 million in 2022.  It's not that they are bad players; they're nice players.  It's just that the Phillies have other large salaries to worry about and both are probably earning above what they should.

A report from Matt Gelb today in The Athletic suggests that the Phillies badly played their hand in the J.T. Realmuto negotiations.  After waiting to negotiate to stay under the 2020 luxury tax, the Phillies might have blown their opportunity.   The Phillies would not have been as good with Crawford in the infield over Segura in 2020, but it may have been passable.

The Segura salary was the difference in getting a Realmuto deal done.

Should the Phillies fail to sign Realmuto, what is next?  The Phillies probably cannot get value in trade for McCutchen or Segura to either clear money or add prospects.  Any Realmuto replacement likely has to come from free agency.

Should the Phillies re-sign Realmuto, it will be hard to find money to add other talent, again, needing to come from free agency.

The Phillies get out from under McCutchen's $15 million annual luxury tax hit after this season and out from under Segura's after 2022.   With big contracts to Bryce Harper and Zach Wheeler, the Phillies are going to be stuck between a rock and a hard place.