Phillies vs. Mets for Realmuto in 2021

While the free-agent market heats up, the Philadelphia Phillies faithful have unknowingly been waiting since only Dec. 2 --the non-tender deadline-- and bemoaned some early signings by their division rivals. Yes, the Atlanta Braves and the New York Mets inked hurlers above their predicted value.

Although the Phillies front office isn’t announcing a plan or signing a known commodity for its own sake, some locals vocalize the anticipated failure of managing partner John Middleton. Basically, broadcasting a strategy is a self-defeating approach, so management leaves fans in the dark. An annual dilemma, no?

“When you judge another, you do not define them, you define yourself.” - Wayne Dyer

Based on both managements’ needs, actions, tells and possibilities, the take here is within the parameters of basic front-office thinking and MLB rules governing their decisions. Obviously, writers have information limits because organizations keep some info under wraps.

Many faithful supporters generally imply a new season even now is a scheduled 162 without any pandemic-influenced finances involved. After all, it was only $145 million for Middleton and -- some believe-- an unacceptable excuse.

The Metropolitans’ approach is to quickly fill their roster needs: a leadoff man, a right-handed bat with power, a catcher and a rotation piece. But while George Springer or JT Realmuto could fill two openings, the All-Star receiver isn’t in a hurry to accept a reasonable proposal, and even an overpay is a maybe.

The Mets did something early, but restless fans --is that all?-- are demanding more than only one reliever from the new owner. Firstly, Marcus Stroman had accepted his qualifying offer of $18.9 million, and they inked setup man Trevor May at $15.5 million total for two summers. But they don’t want a bidding war for a backstop.

By comparison, the Fightins have the most interest in re-signing Realmuto because they realize what he brings to the squad. And they’ll plug their other holes for now: a starter, two solid relievers and a left-side hitter with pop. Yes, this is just the bare-bones plan based on Realmuto’s stance and the competition.

The Phillies faithful are unhappy, doubtful, and/or angry about being in the dark about the team’s plans, but this isn’t a new situation. Basically, their strategy is to maximize their resources and plug most holes.

Because franchises don’t limit their future to only next April, the Mets financial picture for 2022 complicates their spending this winter. In ‘21, the view up close is to pay Realmuto $25 million AAV (average annual value) instead of $10 million AAV for James McCann, but ‘22 has expenditure questions.

Free agents-to-be Noah Syndergaard, Michael Conforto and Stroman with Jacob deGrom, Robinson Cano’s return, and benefits will bring the six-man total to $137 million AAV for ‘22 if New York signs Springer. And the damages by adding McCann would increase to $147 million AAV or $162 million AAV for Realmuto instead.

Barring a poor 2021, Syndergaard, Conforto and Stroman will be candidates to re-up. So, the higher-ups must factor in those upcoming commitments prior to this April, and their decision-making can’t assume they’ll have more money based on contract violations like those in the last two years.

* Total with McCann instead of Realmuto.

The balance could be for a left-side bat with power, another reliever, or a more expensive starter. So, the red pinstripes have some wiggle room, and they waited for the availability of the non-tender candidates. But organizations made them lower offers to begin negotiations: players here like Rhys Hoskins and Vince Velasquez.

Since the Phils and those players haven’t reached an agreement, those figures are not available, but both are under team control. Therefore, they’ll be on the 26-man roster for ‘21. And while Hoskins is a regular, Velasquez will switch to a setup role when the Fightins ink a pitcher for the five-man staff.

Perhaps, when the Metropolitans contacted Realmuto’s agent, they found what the Phillies and the Miami Marlins had already known. He wants to raise the bar for future catchers. Therefore, he is going to wait for the top proposal at the end of the process to select his preferred offer.

Realizing the cost, the wait and the competition, the Mets are pursuing Springer as a leadoff hitter and right-handed bat with pop for the same expenditure but a quicker resolution. Now, they’re also setting their sights on McCann to solve immediate needs behind the plate with 2022’s finances in mind.

If they can’t sign McCann, Realmuto will still be available unless some club is willing to dramatically overpay. And that’s more likely than Realmuto accepting an overpayment now, even though most franchises face 2021’s uncertainty and continuing revenue difficulties.

While most organizations are cutting costs, some fans believe another team will compete for Realmuto if the Mets go in another direction. But the current COVID-19 situation won’t change enough monetarily before spring training for another club to jump in at the last minute.

In short, Realmuto wants Buster Posey money: $159 million for eight years. But he lost his arbitration case with the Fightins: the projected cost had been $10.3 million. Well, the Phillies offered $10 million to Realmuto’s $12.4 million figure: 20.4 percent above the forecast.

By comparison, Middleton’s plan is to take the locals’ heat with his announcement, so he doesn’t put himself in a must-sign overpay with the fan base. And his posturing also keeps the price from being ridiculous --or even lowers it. Consequently, the All-Star receiver will eliminate some teams by holding out until mid-January.

Granted, Middleton stated his financial concerns, and now front offices are contacting the Fightins to initiate trades for their talent. But why would he pursue Theo Epstein who made $10 million last season if Middleton isn’t trying to re-sign Realmuto? Translation: if you don’t plan on winning, you don’t contact Epstein.

Thank you, Dick Allen, for the hope in 1964 after years of futility.

Realmuto’s approach may be counterproductive because GMs want to quickly construct their rosters especially in a pandemic-influenced market. Ergo, they won’t have the cash available in mid-January, plus he may re-up for less than his final pre-coronavirus offer due to limited competitive proposals.

Keep in mind, Realmuto can play first base, and the DH rule will probably be in the National League for ‘22. Therefore, the red pinstripes will have other ways to write his name in the lineup during the life of his contract.

The Phillies rumored proposal was $25 million per 162 for five summers with a club option for a sixth campaign. Basically, Middleton considers re-signing Realmuto like his pursuit of Bryce Harper. But keep in mind, every holdout doesn’t get a better deal, so what could COVID-19 cost the backstop? “Stupid” millions! 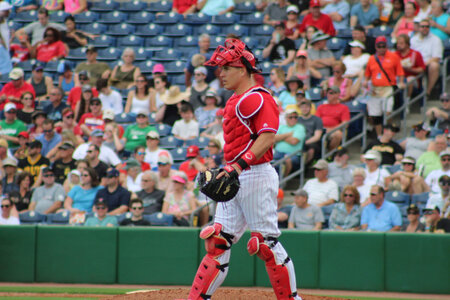 J T should take a one year deal for Twenty million and go to free agency next year when finances are better. Four year 27 million per. In addition the phils should try to make a trade for Lindor and Carresco, sending Del Lo Santos, Vince Velasquez, Roman Quinn, Odubel Herrera and Nick Maton.
They fill two holes and dump some wasted money, then they can sign J T Realmuto plus two relief pitchers such as Hand and Hendricks. they will be very competitive and maybe win the division.

How do you feel about De Los Santos, Quinn, Herrera, and Velasquez?

De Los Santos hasn't shown much just yet, but could be a good player down the road.
Quinn is a major injury away from ending his career, but is good defensively and a speed runner.
Velasquez has good stuff when his mind is working, but he needs a change of scenery.
Herrera can be one of the best cf, but do to his legal matters will probably never play again in Philly, so a new destination is needed to continue his career.

Great article Val. I think we might just land JT if the Mets drop out, they won't overpay tho. Honestly, with a decent BP this team would have been right in the thick of things last year.

Well, Angelo, you don't sound too high on those four.

One is a never-was, another is an injury away from oblivion, a third is a head case, and the last one hasn't played in almost two years.

If you think that of them, why should the Tribe be interested?

Basically, the Phils may not have to overpay to re-sign JT.